Artists Discover Israel Exhibition and Are Urged to Withdraw 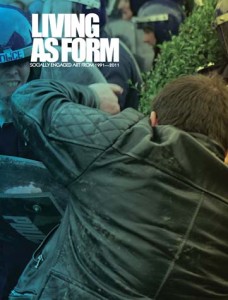 Catalogue for Living as Form: Socially Engaged Art from 1991-2011, curated by Nato Thompson.

The New York arts nonprofit Creative Time is getting a lot of positive press right now for its current installation of Kara Walker’s A Subtlety at Brooklyn’s Domino Sugar Factory, but the attention it is getting for its touring version of the 2011 exhibition Living as Form is not so positive. Living as Form (Nomadic Edition) has travelled to more than a dozen venues, but its current presence in Israel has prompted more than 100 artists and intellectuals, including Lucy Lippard, Chantal Mouffe, Walid Raad, and Martha Rosler, to call for participants to withdraw from the exhibition at a venue with a “central role in maintaining the unjust and illegal occupation of Palestine.”

Apparently, participating artists learned recently—some only by being contacted by Hyperallergic—that the exhibition is currently showing at The Technion, a university in Haifa with extensive research-and-development links to the Israeli military and defense technology industry. A new group called the BDS Arts Coalition (who subscribe to the Boycott, Divestment, and Sanctions movement) with “a basic desire to understand how artists and cultural producers internationally can act in solidarity with efforts to seek justice for Palestinians and in Palestine” issued the letter to artists urging withdrawal from the exhibition.

It seems ironic that this show would end up in this messy situation since much of the work is very political and its own press describes it as “cultural works that blur the forms of art and everyday life, emphasizing participation, dialogue, and community engagement.” Creative Time states that its “commitment to the free exchange of ideas” prevents it from participating in cultural boycotts. In a later statement, it added: “At Creative Time, you can count on the fact that we are giving this issue the time, thought and care it deserves.”

But really, how does a show end up touring in Israel for six months “unbeknownst to participants,” as Hyperallergic reports? Creative Time Director Anne Pasternak explains, “When the show opened in Tel Aviv six months ago we were so swamped with Kara Walker, it didn’t register. It should have registered, what we should have done is call the artists then,” adding, “We are taking a look at our internal processes.”