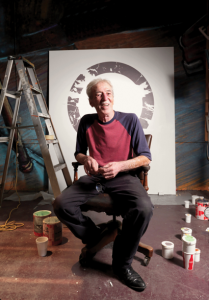 On Saturday night, after a rapid and intense battle against cancer following a diagnosis of the disease less than six months ago, the artist Theo Wujcik passed away at his home in Florida, his dealer and friend Ree Willaford from Galleri Urbane in Dallas reports. “With his loved ones around him, he moved on from this world,” Willaford says.

Born in Detroit in 1936 but a long-time resident of Florida, Wujcik was known primarily as printmaker. He worked for every major printmaking house in the country, including the presigious Gemini G.E.L. in LA where he was Jasper Johns’ printer in 1968. He was also a co-founder of the Detroit Lithography Workshop where he printed Robert Morris’ “Earth Projects” suite, a commission from the Detroit Institute of the Arts in 1969. He was beloved by many of the artists he printed for, including Ed Ruscha and James Rosenquist who recently flew to Dallas for Wujcik’s solo show opening at Galleri Urbane when Wujcik himself could not because of his illness, “as an homage to Theo,” Galleri Urbane’s Willaford said. As a printmaker, “Theo was the best,” Rosenquist said of him that night.

Like his friend Rosenquist, in his own artistic practice as a painter and printer Wujcik had a keen eye for irony: he knew just how to compose a picture to highlight life’s many hypocrises. He tackled the nitty gritty banalities of American life with imagery of fast food, bad beer, and fading logos of Coca-Cola, and explored how American commercialism spills out into the rest of the world in his Asian Series, a highly-detailed, sometimes exquisite picture of cross-cultural influence. 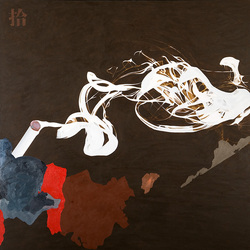 Wujcik’s solo show of paintings at Galleri Urbane in Dallas was his last. He was eager to come to the opening and have a dialogue with his old friends Ruscha and Rosenquist in the space because the “show/event was the one bright light that lit his eyes up and kept him going for a bit longer,” Willaford says. Last week, Glasstire publisher Rainey Knudson recounted her experience at that opening and gallery talk that Wujcik was not well enough to attend. By all accounts, the night was strange and more than a little uncomfortable, but her piece underscores the odd intersection between art and life’s deeper meanings in a way that Theo Wujcik, an artist who spent a lifetime making images he hoped would show something real and raw about the world, perhaps would have appreciated.

The Slicker Side of Punk: Benjamin Terry at...

NO…I don’t think Theo would have appreciated it at all. And I only wish his family did not have to read it. Rainy’s misjudgment of the event at Galleri Urbane lead to an article that diminished and insulted a great artist and educator…as he lay dying.

Thanks Sharon ….. You’re right this good hearted man that worked so diligently with heart and incredible talent didn’t deserve the slight he was given in this article .
Ree

Sharon, I couldn’t agree more. I found Rainey Knudson’s article not only insensitive & tacky, but also wildly inaccurate. It is a true testament to Knudson’s ignorance. As a journalist/writer Knudson should be embarrassed. It was clearly an attempt at snarky humor; seeking some sort of self-important validation. It was both self-aggrandizing and quite frankly, poorly written. It required more research and a re-write. For those reasons, Lucia Siemk: No, I do not think Theo would have appreciated it, as he was an educated man with standards.

FYI y’all
There was an impromptu retrospective and memorial at The University of South Florida Contemporary Art Museum for Theo last week. Among those who spoke was our favorite uncle…Bruce Marsh…another inspiring artist and peer of Theo’s.

He spoke about Theo’s “obsessions and his virtuosity, and how his virtuosity went far beyond his hands.” He said he was staggered by the diversity and sheer quantity of the paintings.

Bruce estimated around 300 people packed the house.
Not bad for “whoever this Wujcik guy was…”

I am still disturbed by Glasstire’s disgraceful reporting about this show and panel discussion.

HE WAS WNDERFUL FREIND AND AFRTIST

I had no idea that Theo died until now. Rest in Peace, Theo. My thoughts are with his family and numerous friends.

He used to come see a lot of the ‘new wave’ bands from the early 80’s, including one that I was in. The club that we played at was generously decorated by Theo’s work of the times. He mentioned on more than one occasion that he found great inspiration from our band. He saw us play dozens of times.

I’m glad to have one of his original charcoal sketches on a huge canvas, the first of his series that he debuted at USF so long ago. That was when he had his studio in Sulfur Springs right by the river.

At that time he gave a personal and private viewing of the USF showing to myself and bassist Frank Poole, giving me (“I want you to have this, Will” was what he said) the initial conceptual piece and Frank his (Frank’s) selection from the showing of whatever he wished. I believe Frank selected what Theo said was the second work of the series, but I may be wrong. I have “Black and White Galaxy” and Frank has “Twisted Image.”

The smile that came across his face when Frank and I arrived makes me smile now! In hindsight I see where he was glad to share his craft with us after we had, on so many occasions, shared ours with him through our music, though ours pales infinitely in comparison. Theo was always so supportive of the Tampa ‘new music’ scene.

I will miss you, Theo. You were a genial, accomplished artist that made our world a better place. You supported the music scene of Tampa in so many very important ways. You were a great teacher and always positive, upbeat and supportive.