It’s Back to the Real World: Global Politics Come to Texas Art 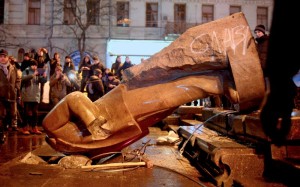 Now that the Olympics and the Oscars are over, it seems a shock to realize that politics as (un)usual have been steadily marching forward in the international community. Politically minded artists and art lovers with a global view are now eagerly looking forward to the FotoFest 2014 Biennial, which begins on March 15 in Houston and focuses on the theme “Contemporary Arab Video, Photography and Multi Media.” Also, as images of Ukranian art critics (okay, angry protestors) toppling statues of Lenin are released in the media, the Ukranian American Society of Texas, based in North Texas, has initiated art and poetry contests on the theme, “What does freedom mean to you?” (Get to work! The deadline is March 16.)

Those who want to jump into the global conversation may wish to attend CentralTrak’s lecture on Thursday evening at 7 pm entitled, “The Psychogeography of Occupation,” given by writer/curator/artist/smart guy (and former guest blogger for PBS’ Art21) Noah Simblist. It sounds like attendees might learn about some really interesting contemporary art that comes from a different perspective, according to CentralTrak’s description:

Simblist will be interpenetrating relationships between art, activism, architecture, archaeology and film and their connection to the flourishing new forms of art practices in the Israel-Palestine-Lebanon region, a geographical zone where tremendous political turmoil is nothing new.