Heads up, Houston. You’ve got a live one heading your way. 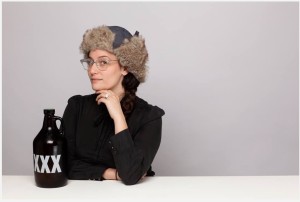 Sally Glass, newly-minted MFA and founder of semigloss Magazine, the quarterly art publication, is moving from Dallas to Houston by the end of this summer. A Dallas native, Glass started the much-loved print magazine nearly two years ago with co-founder Bradly Brown, and just completed both her degree and residency at the University of Texas at Dallas and its CentralTrak program.

One of the more energetic and productive fixtures on the Dallas art scene in the last few years–someone Malcolm Gladwell would call a Connector–Glass is determined to step up her art making in Houston, but plans to continue semigloss (which she counts as part of her practice, really) and hopes the magazine will promote more connectivity between Houston and Dallas. Aside from her work in and around the magazine, she’s a photographer and sculptor; some of her mixed-media installations were included in the most recent Texas Biennial.

Glass chose Houston as a stepping stone away from her hometown when CentralTrak collaborated on a project with Lawndale Art Center last spring and she spent some meaningful time there. “I’ve lived in Dallas my entire life,” she says. “I wanted to relocate to a place where I’m less comfortable, a place that presents a new challenge and expands my opportunities and experiences. But I love that my [Dallas-based] family is still so close.”

As for the magazine, Glass picks a theme for each issue and asks artists and other creative sorts to contribute content based on the theme, with entertaining results. Each issue looks and feels entirely different from the last. (Disclosure: I contributed a piece to the “Failure” issue last summer.) And Glass admits that another major reason for her choice of Houston is so she can continue to work with semigloss’ design-and-layout guru Bradly Brown. Brown (who also co-founded Fort Worth-based art collective Homecoming) moved to Houston just last week.

When is a Movie not a Movie? Homecoming...