Negative space doesn’t have to have negative connotations. In Lee Bontecou’s drawings, negative space is the velvet black of oblivion. It’s the tenuous but unquestioned connections of a dream. It’s dark matter. Drawn Worlds, on view at the Menil Collection, is a survey of the artist’s drawings from the late 1950s through present day and, like many exhibitions of drawings, it feels like a direct line to the artist’s brain. The immediacy of the medium allows ideas to half-surface, leaving the viewer to fill in the remainders. From the outset I’m pulled in and under. 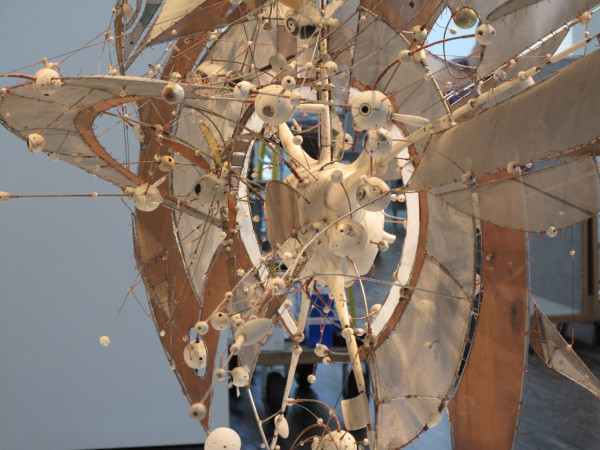 Lee Bontecou is best known for her impressive sculptural oeuvre, but for me the connection between drawing and sculpture is an easy conceptual leap. The confident addition (mark-making) and subtraction (erasure) is certainly similar. (Not at all akin to the squirrel-ish actions of painting—burying things and then digging them up later.) Drawn Worlds orients us in Bontecou’s universe with the inclusion of the show’s solitary sculpture-in-the-round: a dangling, diaphanous weathervane of porcelain, canvas, and wire. Assembled by the artist between 1980 and 2001, it’s taut, hairpin accurate, and somehow casually beautiful. It provides a direct counterpoint to the large canvas piece (1963) that pulls me, vortex-like, into the rooms of drawings. 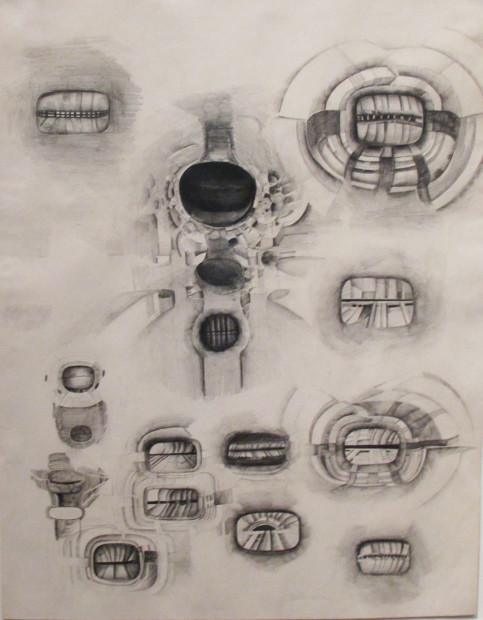 A right turn leads the exhibition-goer through a roughly chronological U-shaped series of small rooms painted various shades of gray. This intimate configuration allows for a limited range of sight, forcing one against the (mostly) small and intricate drawings. Some early sketchbooks confirm Bontecou’s obvious penchant for the natural world—fish heads sketched with a liquid easiness, the exact articulation of a grasshopper’s legs. Rather than Durer-like scientific exactitude, Bontecou hybridizes these forms with gleaming, art-deco machinery. Her dramatic gradations and whirring apocalyptic gears bring to mind the dark visions of  Fritz Lang’s silent masterpiece, Metropolis. 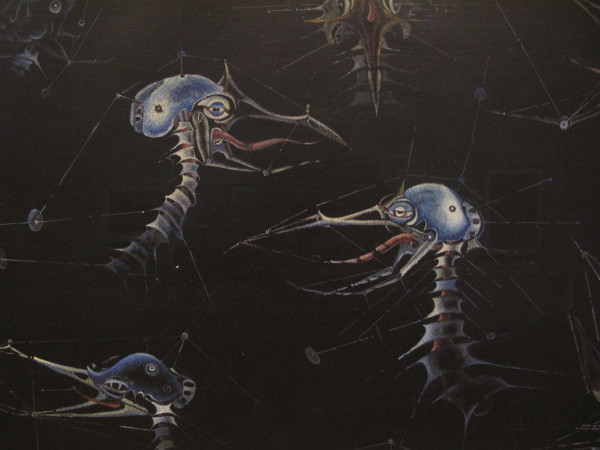 It should be noted that the collection of works presented here represent a variety of levels of refinement. In certain instances, the drawing is worked to the level of inevitability. (Of one masterful example from 2008, we practically expect the alien fauna to come waltzing out of the primordial soup.) And in other, more tender moments, we are allowed to see the artist as she constructs her forms via unfinished sketches, or paintings that mimic the moodier moments of impressionism. Color is not especially effective in this work, as it seems almost tinny against her symphonic blacks.

Several aspects of this exhibition suit it perfectly to the Menil. Bontecou’s fascination with the borderlands of the body, the area between inner and outer, echo the architecture of the famous Renzo Piano structure, which allows light to infiltrate in subtle but transformative ways. Michelle White, the exhibition’s curator, has not overlooked Bontecou’s indebtedness to the Surrealists; one of the rear exhibition rooms opens to that shadowy wing.

Drawn Worlds is a porthole through which we experience the process and evolution of ideas. Bontecou’s territory, her “preoccupation with disaster and instability,”*  is the blade-thin line between attraction and revulsion, between man-made brilliance and self-induced doom.

Lee Bontecou: Drawn Worlds is on view at the Menil Collection, Houston through May 11.