I live in Austin and while there is tons of art to see in this town, I believe that if you treat the state of Texas as one large city then amazing resources will constantly be at your disposal. If you are willing to jump in the car and go to Artpace in San Antonio or drive to Fort Worth for a Saturday to look at what’s new in the Modern or the Kimbell then you can swing by the Nasher in Dallas on your way back. Perhaps you could take a road trip to the Old Jail Center in Albany or a long weekend in Marfa? If you are willing to realize you do on occasion have the time and it’s all about how you balance your priorities Texas can be one big city and an even bigger adventure.

When we first moved to Texas and lived in Dallas we often did day trips to Houston. The eight-hour drive to and from felt like nothing in exchange for a fresh view, new acquaintances and some solid art intake. Houston’s galleries, the CAMH and especially the Menil Collection have become some of my favorite things about living in this state and Robert Gober’s The Meat Wagon or Otabenga Jones & Associates’ Lessons from Below are just a few examples of the Menil’s exceptional programing. To be honest attending Amiri Baraka’s class held as part of the Lessons from Below exhibition and then hearing him read his poetry on the front lawn of the museum has to be one of my all time favorite art experiences. Seeing Stars, which is currently on view at the Menil, is no exception to this quality. Smaller and quieter than the above mentioned exhibitions these anonymous , naive and outsider artists hold there own in sincerity, compulsion and Inventiveness . The exhibition is made up of works on paper that were mostly taken from the museum collection and organized by Michelle White.

The curator’s statement explains how the exhibition’s title was taken from the vision-altering concept of “seeing stars,” which refers to a physiological anomaly in which the stimulation of the retina by the brain creates the illusion of points of light, colors or shapes. White suggests, “Like the works on view, the phenomenon suggests that creative vision is perhaps most interesting when the eyes are shut and inspiration comes from within.” I found this show to be an interesting tangent or extension when thinking about the entire collection and vision of John and Dominique de Menil. It makes sense when you revisit the Surrealist room, which I do every time I go, with all its plethora of carefully collected and arranged objects (much like the entire Menil Collection). It also makes sense when you think about how contemporary artists such as Gober or Otabenga Jones & Associates work with and then become part of the permanent collection. 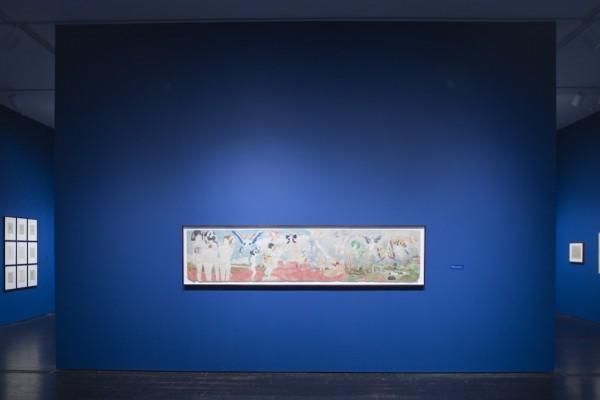 A beautiful double-sided scroll by Henry Darger hangs on the main wall as you enter the gallery. The wall and all walls are painted the color of a dark night sky and reference the show’s title. The exhibition also includes intense line drawings by surrealist Unica Zürn. Some drawings were completed while she was institutionalized. 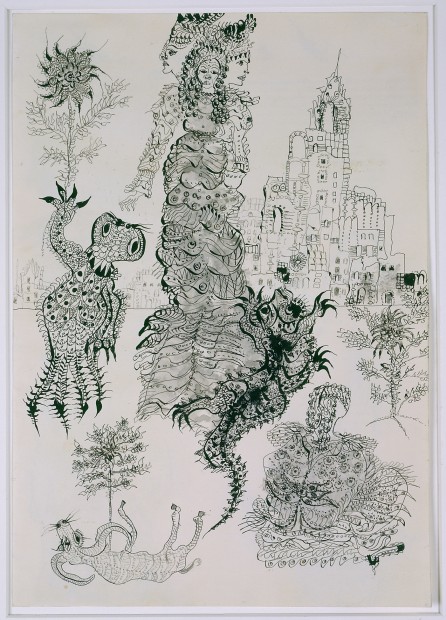 There are also works from the Prison Museum in Huntsville, Texas and Bill Traylor, Joseph Elmer Yoakum. I. E. Reiquer. is represented by 9 tattoo design drawings from the nineteenth-century. Each is utterly charmingly and simultaneously crude. Solid looking women poised atop the most delicate looking little ankles. 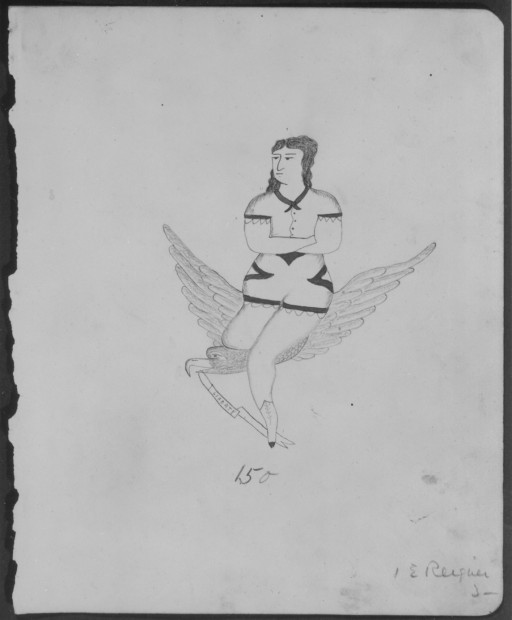 In the end Charles A. A. Dellschau’s drawings and watercolors of elaborate fantasy flying machines collaged with newspaper clippings are what I spent most of my time looking at while in the gallery. Dellschau spent his life as a butcher and lived and worked in an attic apartment in Houston, Texas.  After retirement he filled at least 13 notebooks with his artwork. The first drawings dated 1899 and the last, an 80-page book, dated 1922. 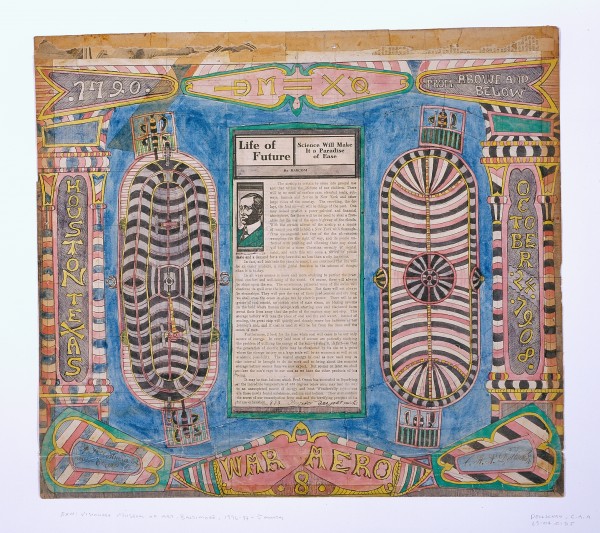 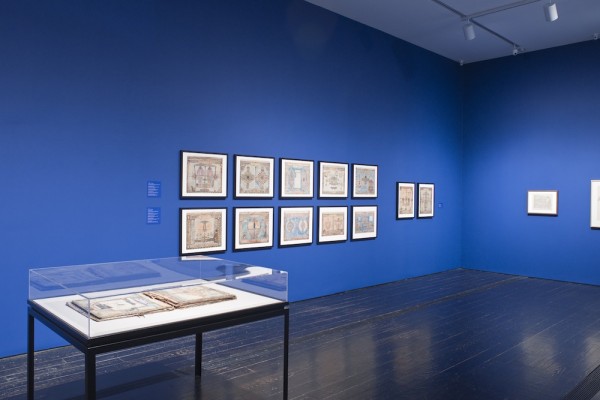 Exhibition overview featuring the work of C.A.A. Dellschau in case and along back wall.

Several of his drawings were hung on the wall and there was a large vitrine displaying a double page notebook that I couldn’t tear myself away from. If only the lid could be lifted and paged through image by image. Then I would have obsessed over them trying to figure out this secret society of flyers until they kicked me out. It’s interesting to know that his 20 odd years of labor had amazingly been discovered in a Houston junk shop. Much like many of these artists their artwork could have been overlooked just as their life was. His notebook reminded me of a cross between the novel Around the World in Eighty Days and Darger’s invented narrative that existed somewhere between fact in his mind and fiction in our own. 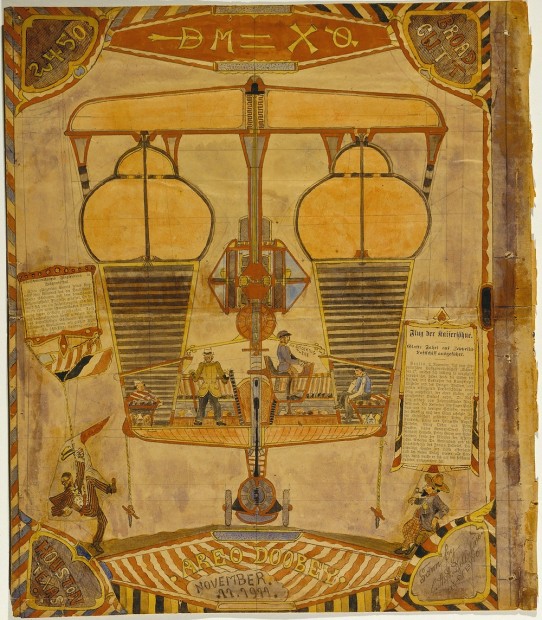 Seeing Stars is a beautifully considered exhibition that glimpses into the often-complex minds of naïve and self taught artists. We get a chance to see how these individuals organized, arranged and made sense of their world(s) in sweetly simple to elaborately ornate works on paper.

Seeing Stars is at the Menil Collection until January 15, 2012.

wonderful photos of the Dellschaus, thank you.