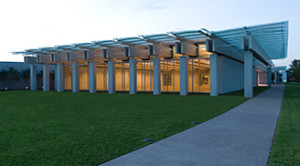 On Tuesday, architect Renzo Piano visited Fort Worth to check out the Kimbell Art Museum’s new Piano Pavilion, scheduled to open on November 27. According to KERA News, Piano walked the grounds, tossed a Frisbee with the museum director, and discussed the relationship between the original Louis Kahn building and the new addition. Piano called his Pavilion is an extrovert to Kahn’s introverted Kimbell, adding, “Competing with a masterpiece is stupid. And it’s also wrong. I love that building from Kahn, since the beginning, since it was built.”

In the evening, he spoke to a near-capacity crowd of almost 2,800 at the Will Rogers Coliseum. Today, he is scheduled to visit Dallas’ Nasher Sculpture Center, where his building is the center of an ongoing battle with the nearby Museum Tower, although Piano stated that he is confident that the problem will be solved.

Beauty, Ugliness, and Power in African Art at...