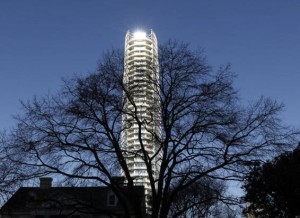 The Dallas Arts District Foundation has had enough. Foundation Chairman Maxwell L. Anderson (also director of the Dallas Museum of Art) and Executive Director Catherine Cuellar published an opinion piece in The Dallas Morning News yesterday calling for the mayor and city council to “press Museum Tower’s owners to finally take responsibility for the damage their intransigence is doing to our community and fix their building now.”

After almost two years of disputes over the glare caused by the 42-story glass-covered condo building erected next to the Nasher Sculpture Center, the Foundation is throwing down the gauntlet. A few weeks ago, the Museum Tower owners released a study, claiming they had found a “100 percent” solution to the problem by simply “fixing” the roof of the famous Nasher building designed by Renzo Piano. In the op-ed piece, Anderson and Cuellar refer to the study as a “misleading publicity stunt,” adding that the owners have been “spreading misinformation rather than working earnestly toward solving the problems it has created.”

They are quick to state that the Dallas Arts District Foundation has always welcomed new developments to the neighborhood, including Museum Tower, but they are just as quick to point out the obvious irony: “If not for the Nasher, Museum Tower would not have been built.”

Anderson and Cuellar throw it down it the final paragraph:

We cannot allow one single stakeholder to spoil the reputation of our entire neighborhood and detract from a flourishing urban center, all while the world is watching.

Catherine Cuellar, “The Kevin Bacon of Dallas”, (and...

Good for Catherine & Maxwell. I’m 100% pro building/development,as long as it is done CORRECTLY and with proper planning/design/siting.Permanent glare is a rather un-neighborly ,obviously not pre-tested effect that is a distracting and possibly dangerous. The developers obviously DO NOT care and have an arrogant,condescending ,elitist attitude.As evidenced per their “study” that says to “fix” the roof of the nearby Nasher Museum ! It is their building that is causing the problem. I would unleash the lawyers and we’ll see who/what gets fixed!!!

I agree with Patrick (above). I’m a 100% pro bidness capitalist. But NOT when it interferes with the rights of others. If not “fixed”, the project is doomed. Who is going to pay 7-figures for a condo there? What was supposed to be a prestigious address is going to thought of very negatively. They screwed up on several fronts and are going to have to pay the price.

Frank Gehry had a similar problem in Anaheim. They sprayed the building to dull it: