Austin Artist Goes on a Beer Run with Some Interesting Company 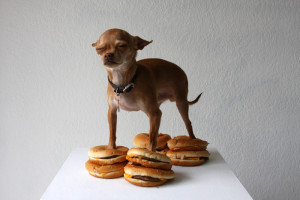 William Hundley, Chihuahua on Cheeseburgers
This was just begging for a beer to go with it.

Austin artist William Hundley is one of six artists chosen to create original works for this year’s Beck’s Art Labels project. The artists on the 2013 roster were selected “because each reflects the independent streak that defines the brand,” according to the press release.

Over the 25-year history of the project, more than 70 independent art labels have been created on more than 500 million bottles; notable participants have included Gilbert and George, Andy Warhol, Jeff Koons, Damien Hirst and Yoko Ono. One of the other artists joining Hundley in this year’s beer label honor is Grammy Award-winning musician and actor Kid Cudi, who stated, “I want beer drinkers to pick up my bottle of Beck’s and be surprised. I want them to think, explore and express themselves with their own art.” Cudi already seems to be taking his own advice, according to a USA Today quote: “I definitely want to get more into painting.” But Cudi adds, “I think the first couple dozen paintings I do are going to suck, so y’all will have to give me some time.”

The Beck’s project is featured in a recent Flavorwire article, which gives a short history of some artists who have contributed to advertising campaigns, including Salvador Dalí’s Chupa Chups lollipos logo (still in use) and a few of the many artists who have worked on Absolut Vodka campaigns (but they forgot to mention the Art Guys’ 1998 1,000 Coats of Paint Absolut billboard!). It seems Hundley gets to have his beer and drink it, too. One of his photographs was also featured last year in the anti-consumerist magazine Adbusters, famous for their spoof ads.

If you want to buy Hundley a beer, you can do so at the opening of The Watchdog and The Thief, a two-person show with Hector Hernandez at Austin’s Mexican American Cultural Center on July 13. Houstonians can still catch the last few days of his solo exhibition at MKT Gallery (inside Phoenicia Market downtown). 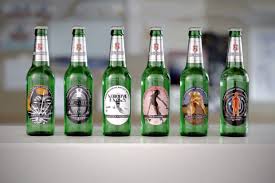