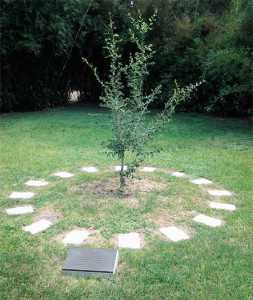 In a low-profile acknowledgement of a de-facto situation, the Menil collection’s Board of Trustees has approved the de-accession of Art Guys Marry A Plant, the hapless live oak tree that became a focus of controversy in 2011 when its (then permanent) installation on the Menil grounds was interpreted by protesters as slap in the face to the issue of gay marriage.

The tree was physically removed from its original site in January, 2013, sparking criticism of the Menil in the press, which was muted by a public statement from Director Josef Helfenstein that “The Menil Collection wishes to make clear that it has not de-accessioned the work, nor has it taken any steps toward de-accessioning the work.”

The formal de-accession is in response to a request from the Art Guys, who demanded official acknowledgement of the removal on February 1.

Hey Glasstire, tell us more about the art guys.

Good that the Menil has severed themselves from this travesty. It was extremely insulting and insensitive for two straight artists to concoct an ” art ” piece about marrying a tree at a time when lots of right-wing Republicans compare same-sex marriage to marrying animals. My partner / legal husband and I have been together 38 years. Life in Texas is challenging enough without such offensive stunts.

Good, less Art Guys garbage is good for the city, i really don’t understand how they have this following. Their stuff is mediocre, and often times downright lazy and uninspired.

It’s no different than an artist putting a Crucifix in a bottle of urine, and insulting Christians.

Art is art, regardless and the marriage tree should stand.