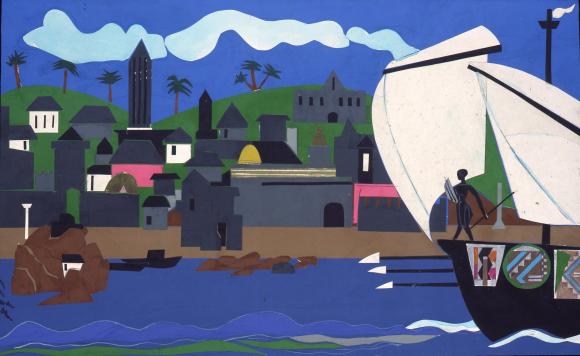 I have a very distinct memory of climbing a mountain with my dad, a literature professor, when I was very small. It was a bare granite-topped mountain in New Hampshire, offering views all the way to Boston and the ocean, miles and miles away. In such a place, naturally my father felt inclined to shout out the first lines of Homer’s Iliad, in Greek, much to my shame. I can hear the Greek words in my head like a song, but I know the English ones better: “Sing, Goddess, the anger of Peleus’ son Achilleaus and its devastation, which put pains thousandfold upon the Achaians, hurled in their multitudes to the house of Hades….” Thinking himself funny, my dad would shout these lines often, in any sort of awe-inspiring environment, or whenever it was paternally necessary to mortify his bevy of preteen daughters. When I finally read Homer’s epics in college, I said, “Oh, hello. We meet again.”

So seeing Romare Bearden’s show at the Amon Carter Museum of American Art called Romare Bearden: A Black Odyssey, curated by Robert G. O’Meally, was like coming home, which was fitting, since the show highlights the collages Bearden made in 1977 based on Homer’s Odyssey, a story which recounts the ten-year homecoming voyage of Achaian strategist and trickster, Odysseus, after the Trojan War.  Many of Odysseus’ most famous exploits—the Cyclops’ cave; Circe turning the ship’s crew into pigs; Odysseus’ royal greeting at Nausicaa, among others—are recounted here in Bearden’s series of colorful and expressive collages, which take cues from Matisse’s Jazz cut-out paintings and extend that series’ vibrant exoticism by blending it with tribal African tropes. 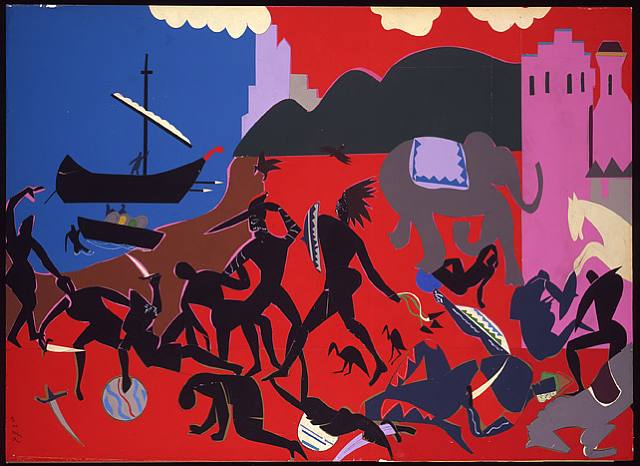 The collages, apart from being some of Bearden’s most highly regarded work, are most known for replacing the Greek characters’ figures with African ones and adjusting the ancient Grecian accents to those of tribal Africa: shield patterns are decorated in angular geometries, plumed helmets are in the shape of animal heads instead of made from shiny bronze, and elephants and palm trees dot the landscape rather than the craggy rocks of Greece. Homer’s story of wily Odysseus easily receives the alteration, the Fauvist colors of the collage papers being suited to the magical tales of Odyssseus’ guile and adventure. And the stories, though fraught with conflict, hardship, and treachery, lend a sense of sun-kissed buoyancy through Bearden’s paper constructions, as fits anything having to do with a character as dastardly and lovable as Odysseus. The black figures in Bearden’s collages, though intended to be of African decent, often resemble the active figures painted on Grecian black-figure pottery, most notably in the piece Battle with Cicones (1977), in which a battle takes place on the sea shore. Bearden’s vision, then, sings back its antecedent, recalling the pictorial storytelling of ancient ceramics.

Bearden’s project of revising the epic in this way clearly speaks to the universality and flexibility of the story, which is why the story interested the artist in the first place. As Bearden said, he wanted “… [to] bring the Afro American experience into art and give it a universal dimension,” a project close to Bearden’s own heritage and identity as an African American and an artist at the mid-century living in the shadow of Clement Greenberg’s art edicts which favored pure painterly abstraction, bar none. Though Bearden dabbled in abstraction, he most often employed the figurative in his pictures, unlike his early contemporaries Mark Rothko, Barnett Newman and Cy Twomby.  They also shared an interest in Greek and Roman mythology, as well as Judeo-Christian history, yet did so following the abstract tenets of the day. 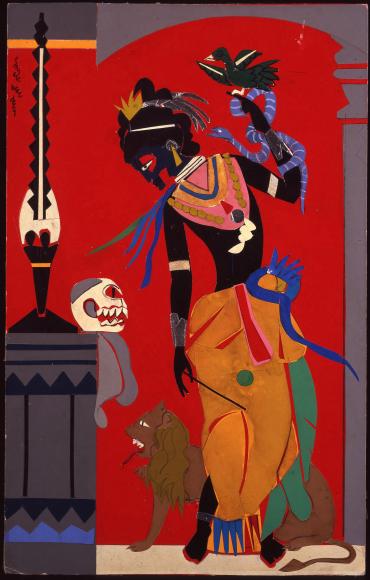 Bearden’s figurative collages, though made over a decade after the Greenbergian rubricated tyranny had largely dissipated, found a way to tap the political climate of the 1960s, especially the civil rights movement, by using the figure as a way to be accessible to a greater audience and thus galvanize people around the cause. The civil rights movement inspired him to take up an even more representational style in his collages than that of his prior work, as many artists did during the 1960s in one way or another, as a way of telling the truth in the frankest way possible. Martha Rosler’s Bringing the War Home: House Beautiful (1967-72), Nancy Spero’s The War Series (1966-70) and Leon Golub’s Napalm and Vietnam series all come to mind; all were all about the Vietnam War, but also feminism, and all employed ghastly imagery that drove home the import of their content at a time that desperately needed truth tellers.

Bearden’s content, however, sets its truth compass to the epic and the metaphor, relying on tales of mythical struggle rather than the facts of the many tensions of his time. These Homeric tales were rooted, like a gospel song is to the Bible, to the notion that, with perseverance and imagination, toil can bear fruit. “Bearden represented,” as curator O’Meally notes, “a cosmopolitan improviser’s stance toward life, an attitude of resiliency and cooperation such that whether in a land as strange as that patrolled by the Cyclops, or in one as dangerous as our own, man is able to not just survive but to find the way back home. The artist’s most enduring message: Whether in Greece or Harlem, do as the Greeks and Harlemites do—improvise.” Bearden and Homer, then, share the same mission: to cleverly spin experience into a something we can all sing.

Romare Bearden: A Black Odyssey is at the Amon Carter Museum of American Art through August 11.