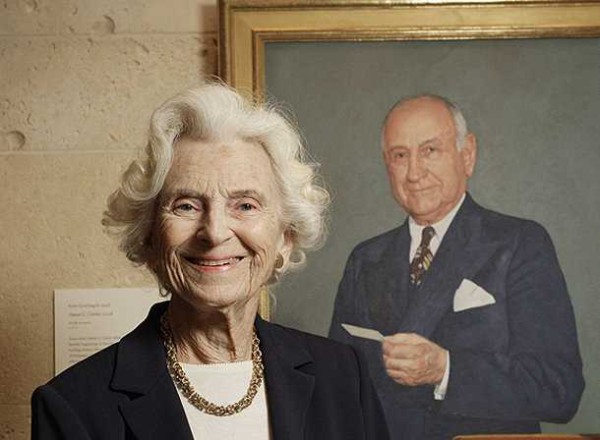 Amon G. Carter was a man of iron will, blunt charm and big ideas. Her father’s daughter, Ruth Carter Stevenson, inherited his intractibility and vision but thinly cloaked it with her own brand of old-school femininity. Her death on January 6 almost completely severs Fort Worth’s last links with the larger-than-life figures who made it a modern city. And it leaves the Amon Carter Museum in a position not unlike that of the Menil Collection upon Dominique de Menil’s death in 1997—for better and worse, free of one individual’s fierce control.

When I first met Ruth, I was writing for the Star-Telegram, the Fort Worth daily that Amon G. Carter founded. She was in her mid-60s and reminded me of nothing so much as a ferocious little bird—bright eyed and filled with eager energy. After leaving the paper, I still saw her on occasions when I had art-related projects she might help with. One of the last times I saw her was when I borrowed some pieces of sculpture for an exhibition at the Fort Worth Central Library. She walked me around her house and gardens, proudly and with genuine passion pointing out works by artists as varied as Evaline Sellors, Paul Wonner and (if memory serves) Theodore Rousseau.

Likely my most vivid recollection of Ruth is from my newspaper days, when she announced in 1998 that Philip Johnson would design an addition to the Carter museum. This was some time after I’d written an article that said the building didn’t have adequate gallery space for both special exhibitions and the collection—which was expanding in quantity and quality. I drove over to the museum and found her with Johnson, involved in one of those mildly bickering conversations that old friends enjoy. When Ruth introduced me to him, it was with the accusation that the entire expansion was my fault. I’m still not sure if she was teasing me or getting in her licks. Probably a bit of both, because that was Ruth—strong opinions and a sharp tongue. 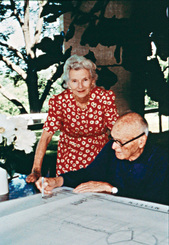 An undated photograph of Ruth with Philip Johnson

Bringing the museum plans to fruition—it opened in 1961—was only one of Ruth’s many achievements, and by no means did she realize it on her own. But had she not persuaded people like John de Menil and Rene d’Harnoncourt to serve on its charter board; had she not hired people like Mitch Wilder, Jan Keene Muhlert and Rick Stewart to serve as its directors; had she not listened to them and not allocated substantial amounts of her own fortune along with funding from her family’s foundation to its support; the Carter likely would bear an uncanny resemblance to Fort Worth’s quintessential memorial to dead, white men: the Sid Richardson Museum of Western Art.

That’s because, when Amon died, he left behind a group of paintings, drawings and sculpture by Frederic Remington and Charles Russell that had its only local rival in Richardson’s own collection of works by those same, two artists. But Ruth, whose brother Amon Jr. was put in charge of the Star-Telegram, had a broader sense of what art could be. Assuming responsibility for a museum that would be a monument to their dead father, Ruth followed her own predilection for pretty pictures and her willingness to defer to her selected authorities.

Today, the Carter owns works that span more than 200 years of cultural production; that reflect the U.S. north, south and east as well as The West; that assert a diversity of artistic perspectives and comprise a collection that’s rife with marvelous contradictions. Although Ruth loved paintings and sculpture, the Carter claims superb holdings in works on paper, many of which exist within the context of pilgrimage-quality bodies of work by Stuart Davis, Georgia O’Keeffe, and James McNeill Whistler, among others. 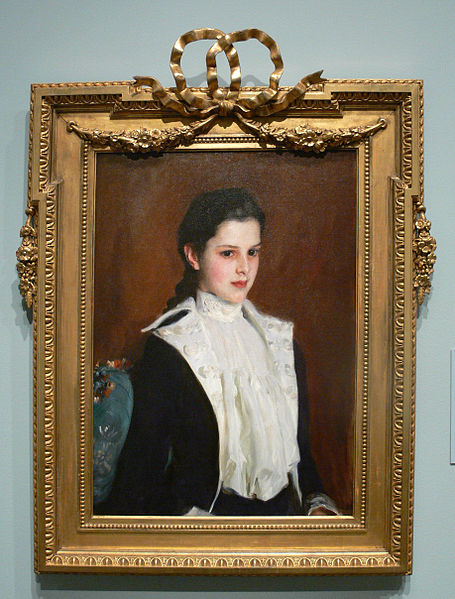 John Singer Sargent, Portrait of Alice Vanderbilt Shepard (1888), which the Carter acquired in 1999

Her own taste shamelessly ran towards the luscious—John Singer Sargent‘s gorgeously framed painting of the gorgeously dressed heiress Alice Vanderbilt Shepard (1888) and Idle Hours (1894), William Merritt Chases’ impressionistic depiction of an upper-class idyll. But she used all of her clout to raise $10 million to buy Thomas Eakins’ Swimming Hole (1917)—an iconic painting in Fort Worth’s art history—so that the Carter could buy it from the Fort Worth Art Association, governing body of the Modern Art Museum of Fort Worth, and prevent it from being sold out of town.

Along with other incidents, that campaign strained Ruth’s relationships with many in Fort Worth. But she chose her fights and, as far as I know, didn’t back down from the commitments she made. She made a lot of good things happen—most salient and most succinctly, the Amon Carter Museum in Fort Worth.

Thanks Janet. It’s really difficult to imagine a Fort Worth without Ruth.

Thanks for the, comment, Mark. Really good to hear from you and I hope all is well. Ruth cared little for what people thought of her, which I wouldn’t call arrogance–as she was willing to accept the consequences, including lack of cooperation. FW really is turning into a much more professional version of itself, with the passionate amateurs on the way out.

Precisely. And ‘investment’ has become a sad and anemic version of what Ruth knew it to be. Her laconic phone conversations reminded me of Don Judd; if she had nothing to say she didn’t pretend otherwise. I found it, as you know, refreshing and ripe with conviction and integrity. I will miss her terribly.

Sadly, there will be people glad to see her gone.