Until recently, I knew very little about the life and work of Missouri-born painter and muralist Thomas Hart Benton (1889-1975). This ignorance didn’t come from lack of exposure as much as hasty dismissal when I was an art student. I’d seen some of his work and had been intrigued by the simultaneous actions and dark implications in his scenarios of early 20th century American life. But at the time, I was too confused about where this stuff was coming from, and so filed it away. Were these depictions supposed to be history, mythology, propaganda? Was Benton promoting or critiquing ideas of Manifest Destiny? Was he an aristocrat or a hayseed? A humanist or a bigot? And was this artwork even serious, or just populist schlock? It didn’t occur to me at the time that the answer could be “all of the above,” and that, for better or worse, these conflicts might make Benton’s work some of the most interesting if perhaps uncomfortable art to consider in the context of our country’s tangled stories, its cultural shifts beginning about 100 years ago, and its identity crisis today. 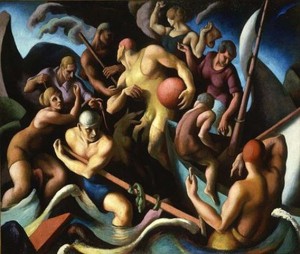 The arrival last week of a retrospective at Fort Worth’s Amon Carter Museum was my opportunity to reopen the Benton file. American Epics: Thomas Hart Benton and Hollywood is not only the first major museum exhibition of Benton’s work in more than 25 years, but also the first to highlight some of the artist’s intersections with and developments alongside the burgeoning of America’s mythmaking movie industry. The exhibition features nearly 100 works, including paintings, murals, drawings, lithographs, and book illustrations created between the 1920s and ’60s. In addition to Benton’s celebrated early paintings such as People of Chilmark and murals including the American Historical Epic series, the show includes a wide range of rarely seen pieces, from sketch studies and quaint character portraits to surreal mountain landscapes and disturbing WWII freakouts. The Hollywood theme is a clever entry point for audiences more familiar with movies than art history, and for those familiar with Benton, it’s a good tactic for pulling the work away from the artists’ prickly personality a bit. Most importantly, it cues visitors to look at his bold, fluid paintings as suspended cinematic stories of American myth more akin to John Ford movies than to what we tend to think of as modern art.

Benton and cinema were born around the same time, and his career blossomed just as the new movie industry exploded. The artist was certainly intrigued by the power of the medium to create visual drama and to reach wide audiences. He also shared with many early Hollywood directors a passion for depicting uniquely American stories—especially Western frontier histories. There are some interesting direct connections between Benton and the early silent film biz that I’d not been aware of before. His first intersection with the industry began in 1914, when the 25-year-old artist was invited by his friend, sculptor-turned-filmmaker Rex Ingram, to design sets, paint backdrops, and draw publicity portraits for Fox and Pathé studio film productions in the emerging moviemaking center of Fort Lee, New Jersey. For the next five years, Benton’s off-and-on work for the studios financed his painting career. He picked up a few tricks there, too—most notably the adoption of the scene painters’ medium of egg tempera, which he used throughout his career to achieve a bright luminosity in his paintings, and the practice of making small clay models of his compositions for studying the lighting of his subjects. 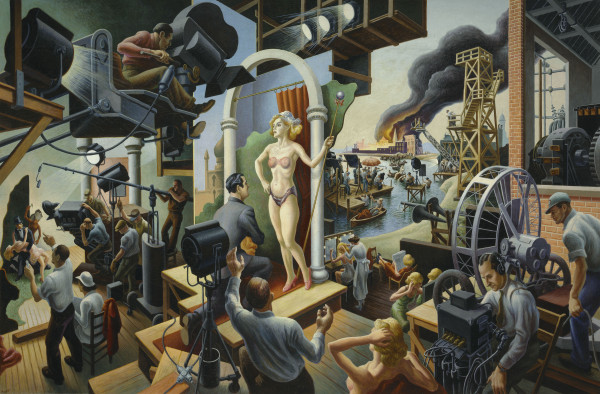 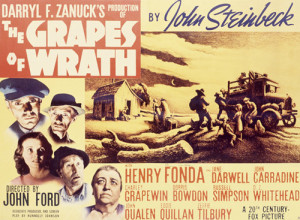 As Benton achieved notoriety as a painter and appeared on the cover of Time magazine, Hollywood entered its “Golden Age” boom. His first visit there was in 1937 when, commissioned by Life magazine to depict the film industry in action, he spent a month roaming the soundstages and backlots of 20th Century Fox Studios and produced a number of ink drawings and paintings. Later, he received commissions to create promotional artwork, including a series of drawings and paintings for the promotion of John Ford’s film adaptation of The Grapes of Wrath and a dramatic portrait for the promotion of Burt Lancaster’s The Kentuckian. The inclusion of these great movie-related images among Benton’s larger body of work is important, though the show’s overarching conceit that Benton was enamored with and highly influenced by Hollywood seems a stretch. These were, after all, simply commercial gigs. In fact, Benton criticized Hollywood for its artless mediocrity, corporate mindset, and false romanticism. The Life magazine commission that first brought him there had fallen through when his painting Hollywood (the centerpiece of this exhibition) was rejected due to its depiction of, in Benton’s words, “the combination of machine and sex that Hollywood is.” While movies interested him, Benton’s disdain for institutionalized “economically conditioned Art” and penchant for including “unsavory truths” was clearly at odds with the Hollywood system.

I had hoped that the curatorial coupling of Benton’s paintings with Hollywood’s early days would be used to prompt larger considerations of American ideologies and the reductive nature of narrative representation (perhaps even echo relevant issues of race, power, violence, and capitalism), not just force easy connections between the two. But this isn’t the only way in which the exhibition gets in the way of itself. In my opinion, the physical installation of the show is as cluttered, distracting, and diminishing of the work as it could possibly be. Its loud wall colors, avalanche of text, decorative white moulding motif, and video monitors every ten feet looping film clips with nagging sound greatly deplete the power of Benton’s works. Further, it allows no space for conversations between works, nor clear head space for the viewer’s own thoughts. I was eventually able to battle the clutter, hone in on specific works, and find my own thought path through the show. But it wasn’t easy. I can’t solely blame this exhibition or the museum, since I’ve noticed a recent, growing trend of ridiculous over-design, reduced negative space, and ton-of-bricks messaging in museum exhibitions recently—especially with larger traveling shows. While I’d entered the museum intending to openly explore the forced mythologies and representational tropes in the era of Benton and early Hollywood, I left the museum thinking more about those of the 21st century. And wishing that Benton’s “cinematic” work was presented less like a marquee and more like cinema.

American Epics: Thomas Hart Benton and Hollywood is on view at the Amon Carter Museum of American Art through May 1.

Very interesting. You make some very good points I had not considered. I’ve seen the show five times. But I’m a longtime admirer of the artist and a filmmaker and arranged for the following article to be published in the FW Weekly. If you’re interested, I’ll share with you a jpegs of the drawing (of a projection booth) owned by Bill Paxton and missing from the show and a couple of Benton studies (for paintings in show)
that were owned by John Paxton.. http://www.fwweekly.com/2016/04/20/benton-and-the-paxtons/