Passion, or How You’re Responsible for What You See 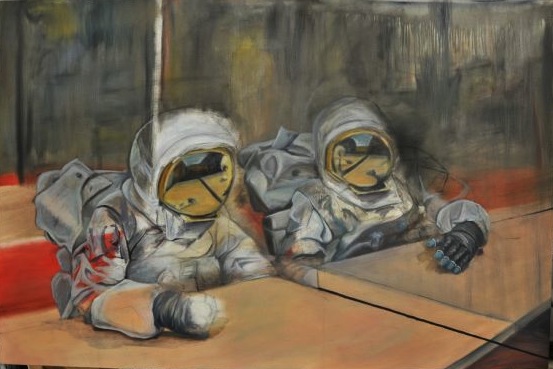 One-Sided Conversation by Caleb Sims at the Lamar University Senior Thesis Show. “My series of large oil paintings explore the theme of isolation,” Sims said. “The astronaut suit symbolizes a contradiction between the security of the suit and the isolation it causes by separating the wearer from all outside interaction.”

I’d rather not point fingers at specific artists, but I am concerned that there is a lack in much of contemporary art of what I perceive as…

A couple of months or so ago I returned to the academic institution that I am recovering from. The occasion was the senior show for some of the last few students that I had an “investment” in, from their educational experience. My first reaction was that the work was very “young.” That doesn’t mean that it wasn’t good work; much of it showed  great potential. One of the finest qualities that the work exhibited was passion. Passion is both an advantage and the bane of student work; beginning students tend to want to put the “entire world” into every piece, as if there is never going to be another. The maturity of graduating students is their willingness to speak to a coherent message, rather than the “scatter” of every concern in the world. 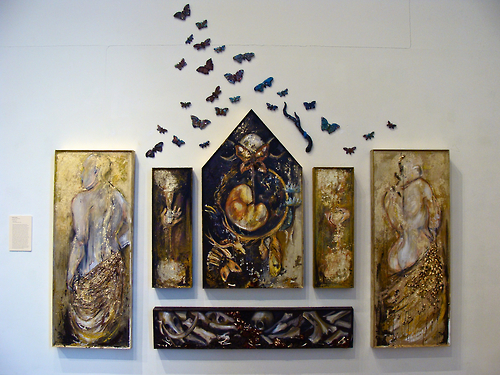 But, the exhibit made me wonder where passion has gone in the wider art world? Consider any of the exhibits you may have seen in the past few weeks or months; was there an element of passion in the (most likely “beautiful”) work? Personally, and it may be my own cynicism, I feel like there is a lack of personality and passion in much of the work shown and sold these days. It’s not a matter of the style or genre of the art presented, but there seems to be an emphasis on something else: sometimes an overarching conceptual base, or an interest only in eliciting an “aesthetic reaction” to beauty, other times a lack of personal vision and sometimes all three. 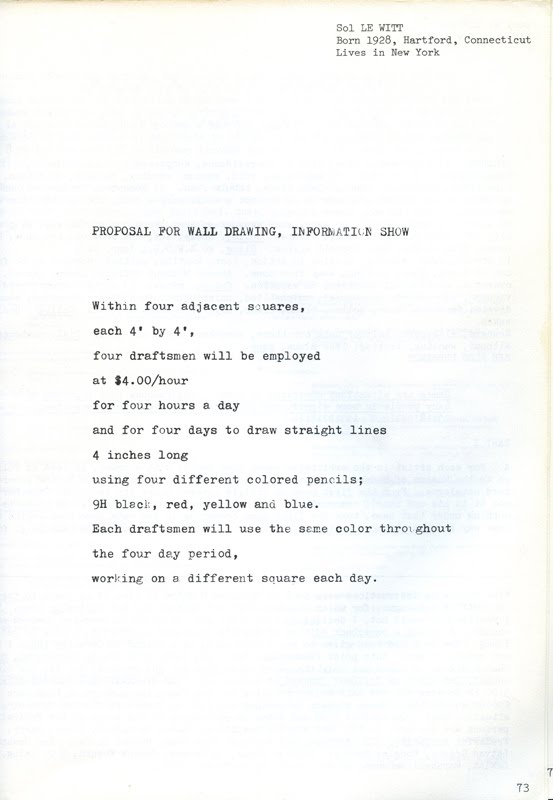 The preeminence of concept over form or content is about 50 years old now, four or five art movements removed from the fist fights in the Cedar Bar generated by the intense personal convictions of the Abstract Expressionists. At its zenith, conceptual art resulted in truly “non-objective” art, there was no “piece” as such; often merely a typewritten description of a situation that may or may not be concerned with art. There was a reaction, of course, a quick replay of the previous half-dozen art movements and then the “modernist impulse” was declared dead and a “post modern” age proclaimed.

I’m not sure I fully understand all the facets of Post Modernism as a movement, but one  major aspect was that the “cult of personal genius” of the artist was decried as less important than a larger social engagement (not that artists are geniuses in the best of times). Other concerns were a reexamination of art history as a subject to be “data mined” and applied to current works, or a critique of “formalism,” referring to art that depended on careful design and execution.

Various theories of art became the basis for much contemporary work, and, while theories need to be acknowledged and explored as part of the zeitgeist of the era, they can remove the artist from the personal “intellectual responsibility” for their art. It’s more convenient to make art if you don’t have to know how to make it, and new mediums or materials only superficially make it new. Having a template for “successful” art has allowed many artists who might not have been recognized to become stars. Spectacle, scandal and scale became the basis for much that has been presented as “cutting-edge” (read: expensive) art in the past few decades and it dominates the exhibits, the secondary market and auctions today. 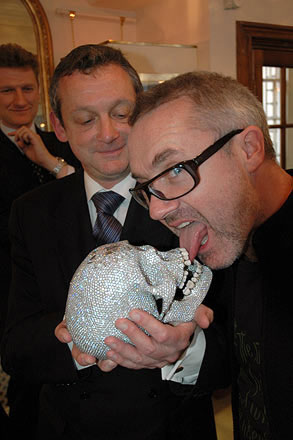 Perhaps it’s just the times. A hundred years ago, at the turn of the last century, there was a similar malaise; much of the academically supported art of the time was pretty vapid. Several movements came out of that vacuum: Expressionism and Cubism are examples. They were startlingly different styles of looking at the world, but what they had in common was that they were passionate reactions to the insipid status quo.

The logic escapes me as to how the Post Modern reinventing those pasts will bring something new to the collective consciousness of the present. While I respect the AbEx painters and sculptors for their moral aspirations and convictions, I wouldn’t want their aesthetic to be resurrected as the new normal. But, I sure would appreciate a passionate standard of quality of some sort to emerge as something of value beyond monetary. There’s a terrible fallacy out there that great cost always equates to great art. Cost is a matter of quantity; art is a matter of quality. The two are often confused.

Perhaps it’s out there right now. In a lecture years back, critic Dave Hickey stated that contemporaries wouldn’t recognize the “New Art.” If that’s true then I’ll be among the last to know, but at least I’m looking for it. And last night Charlie Rose quoted someone whose name escaped me at the time (and I didn’t have the stamina to stay up to watch the rerun) who said “one person with passion is worth forty merely interested.” I fervently hope that whatever may evolve as the “New Art” will be presented with passion. And so should you; it’s a critical critique.

After writing this, I chanced upon a link to one possibility to be the “New Art”; look at author Bruce Sterling’s Tumblr Art Symposium for insight on a possible “new” art.

Another ramble in this morass is by Dr. Raquel Caerols Mateo of Antonio de Nebrija University in Madrid. It’s a little difficult to follow in this translation, but worth the effort. 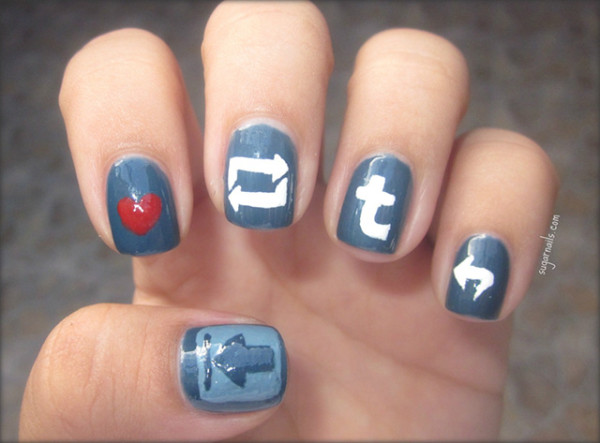 Meredith “Butch” Jack is a Houston sculptor working in steel, cast iron, aluminum and bronze. From 1977-2010 he was a professor of sculpture & printmaking at Lamar University, Beaumont, TX.

The Next Pop in Art

“For me, the last few years of the postmodern era have seemed a bit like the way you feel when you’re in high school and your parents go on a trip, and you throw a party. You get all your friends over and throw this wild disgusting fabulous party. For a while it’s great, free and freeing, parental authority gone and overthrown, a cat’s-away-let’s-play Dionysian revel. But then time passes and the party gets louder and louder, and you run out of drugs, and nobody’s got any money for more drugs, and things get broken and spilled, and there’s a cigarette burn on the couch, and you’re the host and it’s your house too, and you gradually start wishing your parents would come back and restore some fucking order in your house. It’s not a perfect analogy, but the sense I get of my generation of writers and intellectuals or whatever is that it’s 3:00 A.M. and the couch has several burn-holes and somebody’s thrown up in the umbrella stand and we’re wishing the revel would end. The postmodern founders’ patricidal work was great, but patricide produces orphans, and no amount of revelry can make up for the fact that writers my age have been literary orphans throughout our formative years. We’re kind of wishing some parents would come back. And of course we’re uneasy about the fact that we wish they’d come back—I mean, what’s wrong with us? Are we total pussies? Is there something about authority and limits we actually need? And then the uneasiest feeling of all, as we start gradually to realize that parents in fact aren’t ever coming back—which means we’re going to have to be the parents.”

Thanks Seth for sharing. Fantastic.

Seth, I’m not sure where you found that, but I wish I had. But, there are scientific studies that show that people are more creative when they are under some sort of restriction than they are when they have none.

I love this Seth.

Butch, you’re right. As I get older (40), I realize that the only works of art that attract me are the ones that actually give two shits about something. Spectacle is great, there’s nothing wrong with it, but eventually it’s just throwing poop at a white wall. This sense of detachment and depravity is so pervasive that I think that human emotion has simply been lost in the shuffle. It’s almost passe, and that’s just a shame.

It seems to me that obsessive compulsiveness is the new “passion.” If you’re willing to spend 500 hours repeating the same process, image, brushstroke, etc, you can wow people with your sheer doggedness. I’d like to see some passion, but maybe a little restraint and brevity, too.

Good essay, good responses. I am struck by how much in cycles, we typically have always needed, sought and savored this “passion” in work, but equally have always needed a bit of a relief when it has become the paramount subject rather than the fuel and sometimes the sweetness of the reward. So goes the struggle. I think of Basquiat, who brought heat and abandon (I guess that is one way to describe passion), into the mix just when it was needed. Art made with the tears and blood after a our long season of fine work from the brain.

I’m not certain that OCD & passion are synonyms; OCD & commitment maybe….but passion can come in several types of packages; execution would be one that OCD would fit into. What about passion of imagery? then execution becomes a matter of appropriate craft. More years ago than I would prefer to remember, a friend showed me his latest drawing: a repetition of small circles to fill the format. “It’s all about process”, he said. I’m pretty sure he didn’t suffer from OCD, but at the same time there wasn’t much passion within the image or execution. A friend pointed out this morning that I never defined passion and I’m not certain I can, but, like pornography, I can recognize it when I see it and I haven’t seen much recently. Perhaps this weekend?

Kathryn Kelley comes to mind as a Houston artist whose work has passion as its essence. Her recently ended show at Art League Houston, “The Uncontrollable Nature of Grief and Forgiveness (or lack of)” was deeply moving to me. Her earlier work shown at Darke Gallery, after a summer residency there, also had the capacity to stir emotion.

I invite you all to come to Russ Pitman Park, in Bellaire, Newcastle at Evergreen, from 4-7pm tomorrow, 16 March. I passionately have been involved in the installation of: “THE CHIME, THE LABYRINTH, AND THE MENDING CIRCLE”. Hopefully you will also feel the passion as you thoughtfully walk the labyrinth pathway of BONES, and by placing a bone into the center ‘MENDING CIRCLE” feel compassion for victims of abuse.

Love the David Foster Wallace quote and agree with Casey, though I would expand her comment to say that “wowing people” is very poor motivation for doing anything…