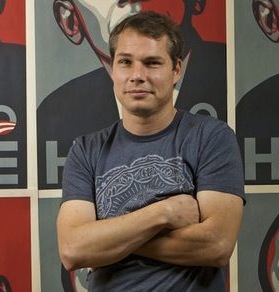 Shepard Fairey has avoided jail time in the aftermath of his misdemeanor criminal contempt conviction on Sept 7. Fairey was sentenced to two years’ probation, 300 hours of community service, and a $25,000 fine by Judge Frank Maas, a United States magistrate, for creating false documents and destroying evidence in relation to the 2009 lawsuit and counter-suit between Fairey and the Associated Press over rights to the photograph used to make the famous Obama HOPE poster. Fairey settled that suit by agreeing to pay the AP $1.6 million.

Fairey’s frequent contributions to charity and eloquent statement of remorse for his actions contributed to the judge’s leniency. Fairey summed up the incident in a website statement: “My wrong-headed actions, born out of a moment of fear and embarrassment, have not only been financially and psychologically costly to myself and my family, but also helped to obscure what I was fighting for in the first place— the ability of artists everywhere to be inspired and freely create art without reprisal.”