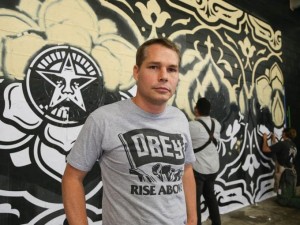 Famous street artist Shepard Fairey (and creator of the iconic Obama “Hope” campaign poster) visited Detroit last month to paint the largest mural in his career — commissioned for the One Campus Martius building — but admitted at the time he’d be doing some unplanned tagging elsewhere in the city. Today the 36th District has issued a felony arrest warrant for the Los Angeles-based Fairey which, according to the Detroit Free Press, will “bring a maximum penalty of five years in jail, plus fines that could run higher than $10,000.”

Detroit police accuse the artist, 45, of causing roughly $9,000 worth of damages and “that the next time he comes back to Detroit, they will arrest him if he doesn’t turn himself in first.”

When Fairey was in Detroit last month he told the Free Press: “I still do stuff on the street without permission. I’ll be doing stuff on the street when I’m in Detroit.” It’s been reported that his distinctive  Andre the Giant face and other images have shown up, in poster form, plastered on some downtown buildings “in Eastern Market and along Jefferson Avenue.”  It’s unclear at this time if he used paint on any of the properties.

It’s possible that Fairey illegally tagged up to 14 locations, though some of the property owners won’t press charges. Fairey has been arrested more than a dozen times in his career.

Rumor is he pays other graffiti artist to put his work up for him like a painter and lowly apprentice arrangement, or an outdoor marketing plan. Yes he is a graphic designer but he is promoting a brand and it is branding like nike would utilize – and attempt to gain authentic credibility and build the image of his company. Yet it is a stimulus for graffiti artist.

He also created the Obama Hope artwork without obtaining copyright permission from the photographer. OK – but then he lied about it and said that it was an original piece of art. Ironically, when someone used Fairey’s Obey image, Fairey claimed infringement. Go figure.

Couldn’t he just deny claims, and say it was a copy cat?
Its good that he is still fighting the street fight, I wish I knew more about his journey. Either way Im sure this will help sales more than hurt him.