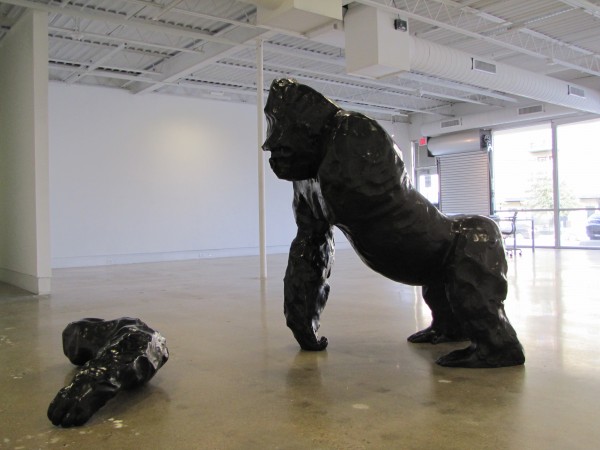 Angus Fairhurst, "A Couple of Differences Between Thinking and Feeling"

Fort Worth Contemporary Art’s exhibit of Angus Fairhurst’s bronze gorilla sculpture entitled A Couple of Differences Between Thinking and Feeling pays homage to the YBA artist who tragically died in 2008. Post-death, we cannot help but anthropomorphize and project the artist’s depression and loneliness onto the magnificent sculpture. The gorilla, regal in stature, stares at the ground, where his 300-pound severed arm lays.

Recently reading curator Christina Rees’ post on Guerilla Curators, I think this exhibit reflects two examples of guerilla curation. It is a bold and risky venture to show only one work of art in an otherwise empty gallery—a decision that left her board conflicted. The empty white institutional walls and surrounding space force the viewers to reflect more intently on the work, rather than giving it a cursory 30-second glance.

The second act of guerilla curation occurs when moving the sculpture from Dallas where it was on exhibit at the Goss Michael Foundation to Ft. Worth, a mere 45 miles away. This was no small feat and required a large crane to move and install the massive work. Rees admits that she wanted to exhibit the work prior to its Goss Michael showing. Despite the proximity between the two cities, she decided to show it anyway. And she’s right. The context is completely different. The sculpture did not function as a poignant homage to a great artist who died too young. At Goss Michael in juxtaposition with Jim Lambie’s colorful optical work, the sculpture took on a more playful, circus-like tone.

The two exhibits of the same work raises a larger question about the DFW art world. As a newbie, I don’t pretend to know the nuances and the players in the two cities, but it does seem strange that folks involved in the art world don’t want to travel outside of their respective city to attend an art event or lecture.  It reminds me of New Yorkers—West siders don’t visit the East side and vice versa. I’m not sure if it’s a turf thing or laziness on the part of art folks, but the gorilla and resulting guerilla acts are worth a visit.

So great to have the chance to read insightful writing about an installation I wish I could see. Makes me more glad and grateful than ever for Glasstire.

It’s always seemed to me the committed artists and viewers wouldn’t hesitate to make the trip across the DFW metroplex. BTW, don’t forget the Denton residents who are constantly on the road to view art.

Hi John– I haven’t been here long enough to know everyone and haven’t had the pleasure yet to meet the art folks from Denton. I’m sure there there are artists/viewers who do make the trip, but many more who probably didn’t see either exhibit.