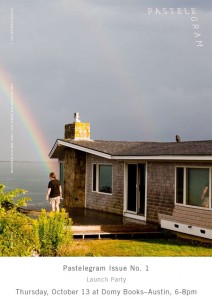 The first print issue of Austin-based image magazine Pastelegram is launching with a party at Domy Books, Austin, on Thursday, Oct. 13 from 6-8p.m. Each issue of the biannual “artwork-as-magazine” will feature an artist’s original work, collected with other relevent “source material” and an interview with the featured artist.

First up is Austin photographic artist Barry Stone, whose issue is titled The sun had not risen yet/ Now the sun had sunk, after lines from Virginia Woolf’s The Waves. Stone’s source materials include an excerpt from Sir Thomas More’s Utopia, an article by Maria Bustillos on David Foster Wallace’s library of self-help books, and an essay written by Bernard Yenelouis on the early abstract photographer Alvin Langdon Coburn.