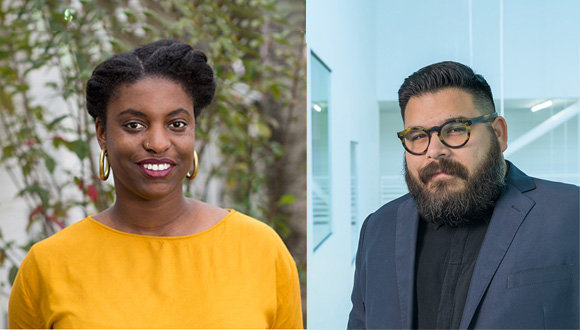 Big Medium in Austin has announced Ryan N. Dennis and Evan Garza as curators and creative directors of the 2020 Texas Biennial, an independent survey of contemporary art in Texas organized by Big Medium. Founded in 2005, the Biennial sometimes features multiple curators (including in 2013 Glasstire’s Editor-in-Chief, Christina Rees, before she joined Glasstire). Over the years, the Biennial has included 300 Texas, including yours truly in 2017 when it was curated by Leslie Moody Castro.

“I am honored to co-curate this exhibition with my colleague Evan Garza on behalf of Big Medium,” wrote Dennis in a statement released by Big Medium. “This exhibition and its subsequent program will share a Texas tale that is sure to illuminate the many ways that artists are working now, and highlight the important conversations that Texas artists want to have now and shape the dialogue in the future.”

And here’s Garza on working with the Biennial: “I’m thrilled to work with Ryan Dennis and the staff of Big Medium to organize the 2020 Texas Biennial and its related programs, especially at such a consequential cultural moment. Ryan and I are excited to build a platform for the important work being produced in Texas and by Texans abroad. I’m honored to work with her and the team at Big Medium.”

Dennis is the Curator and Programs Director at Project Row Houses in Houston, TX. Her work focuses on African-American contemporary art with an emphasis on socially engaged practices. She is deeply interested in the intersection of art and social justice while creating equitable opportunities for artists to thrive in their work.

Garza is a curator, writer, and the former Director of Public Art at Rice University, where he served from 2016–2019 and oversaw major acquisitions of work by Sol LeWitt and Ursula von Rydingsvard and curated solo presentations by Nina Katchadourian, Erika Blumenfeld, Frederik De Wilde, and Jarrod Beck. Previously, Garza was Assistant Curator of Modern and Contemporary Art at the Blanton Museum of Art at the University of Texas at Austin from 2014–2016, where he was managing curator of the exhibitions Warhol By the Book, Come as You Are: Art of the 1990s (2016), and WITNESS: Art and Civil Rights in the Sixties (2015).

For more information on Dennis and Garza, and to learn more about the Texas Biennial, please go here.