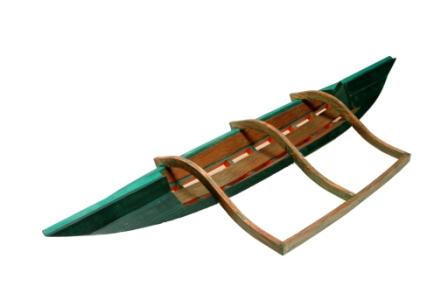 The Arlington Museum of Art’s current exhibition surveying the career of Dalton Maroney covers one year shy of three decades. His work is inspired by the boat form of Colorado fly fishing, and more specifically to the landlocked eye of North Texas, the canoe. Meticulous handcrafting, hearty wooden frames, and painted hues drenched by the sun (or look that way) evoke the outdoors of Native America rather than a rich man’s yacht or the sailboats of White Rock Lake. Everything I know about boats I learned from Gilligan’s Island, which makes me the best and worst person to look at Mr. Maroney’s body of work. 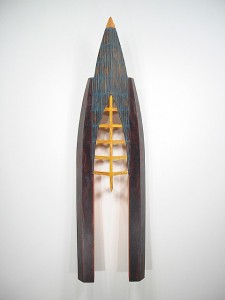 Consisting mostly of large acrylic-on-wood painted sculptures, Flow shows tremendous range within a recurring theme/style that could have been limiting. The boat-forms  are vertically mounted as if preparing to dart up the wall and through the roof. All are fantastically symmetrical and reward close examination with rich, diverse detail. They seem fierce and dangerous and too crowded on the main wall of the gallery, but curator Benito Huerta made sensible use of the space available. The pieces suggest vessels in the making or big broken remnants, and their acrylic surfaces have a threadlike, veiny appearance, sometimes like bark under moss, sometimes like scales on a sea creature. Some pieces, like “Slice” (1995), allow a glimpse inside the boat-form’s cavity, revealing horizontal slats of a would-be floor that provide a nicely understated contrast to the aggressive vertical attitude of the room. Meanwhile, its outer surface is a steamy black mix of river-fog shades. “Slice” has a wall to itself, and rightly so. (Sadly, I do not have an image for you.)

Occasionally the acrylics look like crayon, as if a chance was taken that did not quite work. Oddly, those choices are spread over the years rather than belonging to any given era or decade – garish oranges are present in works from 1987, 1997, and 2006. While other colors fade and blend in an intricate dance of process and texture, these oranges refuse to merge their part with the whole and take over their respective sculptures. Most of the works mix color with such subtlety that I could have explored those surfaces for hours, as I imagine many collectors of Maroney’s work do. 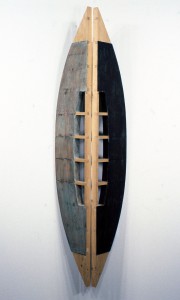 The study and comparison of Maroney’s individual pieces is a fun exercise in discovery: unexpected curves in sequence like wooden vertebrae or boat pieces separated by cafeteria-tray divisions that flank a main form. The oldest work, “Shambs” (1982), leans child-like against the gallery’s floor-to-ceiling windows with a pleasant enamel surface coating on wood.

A back room of works on paper (plus one new sculpture that breaks from the rest) is a delight. Split like a children’s storybook with a boatish design on the left and a corresponding illustration on the right, this series of pastels on paper provokes a sense of ghostly disappearance and skeletal remains. “Ghost Bow” (2000) mirrors its boat-side with the figure of a feather that looks like chalk on a blackboard, self-erasing before our eyes. “Anhinga” (1994) looks very much like the large wall-hung pieces in the main space, but its mirror image is a water-phoenix – half skeleton, half sinister wingspan – and both sides possess that sharply drawn beak pointing straight up, off the page, and out of the room.

Maroney is having a good summer – a show of new works closed just last week at William Campbell in Fort Worth.  FLOW runs through July 31 at the Arlington Museum of Art.

Betsy Lewis is a writer who likes art and lives in Dallas.

Betsy;
Thank you for a wonderful review of Dalton Maroney’s exhibition at the Arlington Museum of Art. We hope everyone has an opportunity to see this survey of his work!
Pam Campbell

This is an exhibit for all generations as witnessed
by the comments from children leaving Art Camp.

As the owner of “Nurl” and two other Maroney works, I especiallly enjoyed his show and your thoughtful review.