by Michael Bise May 28, 2010
FacebookTwitterEmail 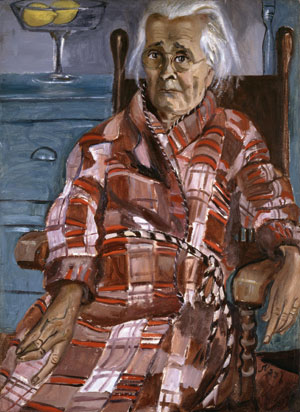 I come from a young family. I’ve been lucky enough to grow up with my mother’s parents playing a significant role in my life. When I was very young my grandmother was still in her forties and I remember my grandfather’s 53rd birthday party. As an adult, their advancing age shocks me every time I return home. My grandfather just tuned 76 and my grandmother is now 68. I’ve never invested as much time as I should in learning my grandparents’ secrets, listening to their stories, or making an effort to
understand the lessons they’ve learned from a long life. I’ve been too busy being young.

Age isn’t held in high regard in the United States and the American artworld is no exception. Youth and the supposed burst of brilliance that comes with it is always very much in demand. Of course this is nothing new. Many of the great Romantic poets created their best work and died in their twenties. There is a perception in the arts in which artists beyond a certain age are presumed to have left their best work in the past and find themselves in a losing fight between creating new and novel works while holding on to a hard-won, well-established visual vocabulary.

Alice Neel is one of a few exceptions to this rule. Neel made paintings her entire adult life but only found an authentic, idiosyncratic visual voice when she was in her late 60s and early 70s. I went to the Alice Neel exhibition Painted Truths at the Museum of Fine Arts Houston a few weeks ago with high expectations. In spite of my former professor Vernon Fisher’s assertion that the thing he liked best about seeing an Alice Neel painting in a catalogue was his ability to immediately turn the page, I have always thought Neel’s portraits honest, skillful and smart. But I have also generally viewed them in the leveled field of all the images I have seen and learned about in my art education. I’ve rarely considered them in the context of her entire body of work and never in the context of her age. 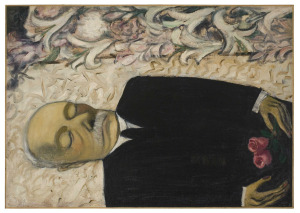 So I was surprised when I left the exhibition the first time feeling underwhelmed. I still liked the paintings, particularly her formally impressive, brightly colored canvases from the late 60s and 70s, but there is a labored quality to many of her earlier works. Indebted to a dark, symbolic modernism that recalls the brown patina of Balthus and the portentous, surreal drama of De Chirico, her early paintings seem too earnest and lack the cynical humor that characterizes her best, later portraits. The few cityscapes included in the exhibition have an expressionless anonymity that evokes Edward Hopper, but they lack his psychological content. Where Hopper painted buildings and people as impenetrable ciphers, evoking a postwar society that privileged automatons over human beings, Neel’s take on the city feels stylistically indebted to him but not philosophically committed to his particular brand of nihilism.

On my second visit to the exhibition I began to realize where Neel’s appeal lies for me, not just as a painter but also as an artist. I began to see an artist whose paintings reflect the struggle to find a unique visual voice. It’s a struggle I can relate to as every picture I make falls short of my expectations and it is left to the next picture to make up the difference. It hardly ever does. I’ve suspected for a long time that the ephemeral quality of many young artists’ work and careers have something to do with the fact that the rise in MFA educations result in artists who emerge into the artworld half conceived but fully formed. What is poignant about Neel’s body of work is the fact that it was only when she reached my grandparents’ age that her life experience and her studio practice finally came together to form the strongest paintings of her career.

As I looked carefully through all the works in Painted Truths, there were moments in certain paintings where the compelling visual language Neel would eventually
develop made itself heard through the struggle in the rest of the picture. These moments point the way to the powerful images she ultimately made in her old age—the strange and awkward newspaper collage that rests under the solidly painted hands of a union organizer in Pat Whalen, the long, distended limbs of a sick young man in the painting T.B. Harlem and the scaldingly unsentimental painting Dead Father, an image of her father’s corpse in a coffin. What is equally poignant, but more
frustrating, is the fact that as quickly as these flashes of inspired picture-making appear, they seem just as quickly to disappear, and we are left with paintings like the portraits Dore Ashton or Psychiatrist’s Wife (Elsie Rubin), that evidence a painterly struggle indebted to a kind of European Modernist figurative painting that by the 1960s was thoroughly outdated. 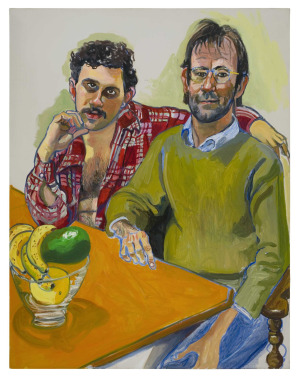 Then, sometime in the late 60s, Neel’s paintings began to explode, fragmenting and taking on a life of their own. These pictures and many that followed cannot be mistaken for anything other than an Alice Neel. Likely informed by the palette of Pop Art, the browns, blacks and died-blood reds of her earlier paintings disappear and her images become bathed in a bright, contemporary light. The key to Neel’s pictures from this time lies in her combination of a carefree palette and a casual, even lazy sense of space with what appears to be a deeply cynical perception of the human animal. Like the image of her father’s corpse, babies in Neel’s paintings are almost always
stripped of any trace of sentimentality and adolescent children seem so lost in their awkwardness as to appear grotesque. In Andrew, a portrait of Neel’s infant grandson, the baby is painted as a phallus attached to a body. Rather than envisioning the innocence of youth, the viewer is invited to view the child as the first moment in the
process of the creation of a corrupted, Freudian adult. Neel’s portraits of middle-aged bourgeoisie, whether friends, family or colleagues, highlight hairstyles, clothing and the superficial accoutrements that allow us to judge one another based on material possessions and social rank. The matching patent leather shoes in the family portrait of John Gruen, Jane Wilson and their daughter Julia, called The Family, become an unintentionally hilarious signifier of upper middle class pride that seems to have passed genetically from the parents to the hapless daughter who looks absolutely miserable. And always, underneath these images are Neel’s visible skeletons of distorted, incompletely sketched blue lines that might just as likely end up in a quickly sketched claw as a realistically rendered hand. 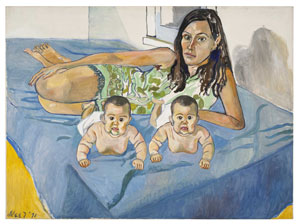 Seeing Neel’s best work juxtaposed with her early, decidedly less successful struggles was the most enlightening aspect of Painted Truths. The real value of Alice Neel’s work rests not so much in any one picture or in any one period of her production. While I believe that the paintings she made toward the end of her life were the strongest,
Neel’s entire body of work stands as a stubborn example of how long and difficult the road of artistic evolution really is. Her oeuvre gives lie to the cult of youthful celebrity that we in the artworld have been too willing to endorse in recent years. We wait with bated breath for whatever new reification of 70s conceptualism, 80s expressionism, or 90s social conscience the newest, brightest, youngest things bring us. In the face of an artworld that has adopted wholesale contemporary culture’s cyclical, self-consuming model, Neel’s work reminds us of art that is created in response and grows in relation to a life lived. Her work reminds us that age does not necessarily dim perception, blunt intellectual sharpness or sever us from a contemporaneity built around youth culture. After seeing this exhibition, I feel I should visit my grandparents a
lot more before they die. Whether I do or not, will depend upon the folly of my youth.