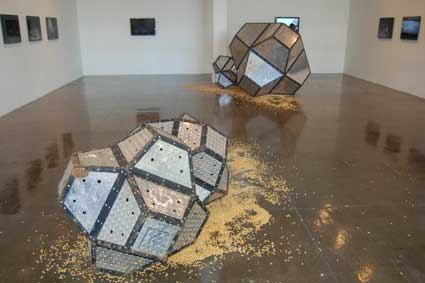 “The landowner didn’t know he had the rams,” Graybill said. “The rams tended to be most active during the day, while the hogs came in at night and bedded down. The corn doesn’t actually have any nutritional value for them; it’s like feeding them kid’s candy.”

Guest curator Helen Molesworth, chief curator of The Institute of Contemporary Art/Boston, selected the artists for 10.1, which also features Berlin-based Swedish artist Klara Liden and Austria-born, New York-based artist Ulrike Muller. 10.1 is on view through May 16. 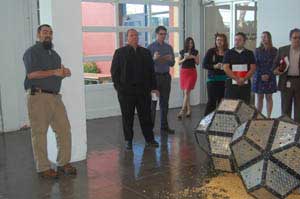 In his installation at Artpace, Graybill set up some of the wild hog feeders surrounded by piles of corn, as well as videos and photographs culled from his weeks of 24-hour surveillance of the site at a ranch one hour south of San Antonio near Pearsall.

“I used infrared cameras that are used to track game, and the cameras were heat and motion-activated,” Graybill said. “The metal sculptures are designed so that it would be easy for the hogs to get their noses under them and push them around. But I wanted a shape that would cause a kind of truncated motion. Still, the hogs would push them more than 100 yards.”

The wild hogs evolved from the crossbreeding of escaped domestic pigs and Russian boars, which were introduced to Texas for hunting, Graybill said. “Tush Hog” refers to the animal’s coarse hair, adapted to make the hogs better able to traverse the South Texas brush country. They also have enormous tusks that can slash a man to shreds.

“The Tush Hog is the biggest hog, the one you don’t want to mess with,” Graybill said. 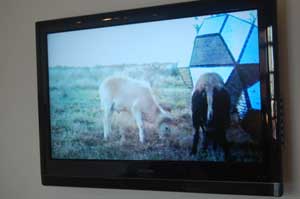 In one color video during the day, rams rear up on their back legs and then bash into the sides of the metal feeders to dislodge the corn. In a dim nighttime video, the eyes of hogs gleam red. The still photos show the animals feeding at day and night, sometimes bedding down together.

“A lot of my work is about trying to re-connect with the rural landscape I grew up in, but which is being displaced by urban development,” Graybill said. “I grew up in a rural area near Houston, but now urban sprawl has taken over. I think the landscape is changing faster than our culture.” 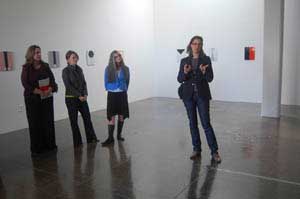 Muller experimented with transforming her drawings into baked enamel on steel. Artpace provided her with a kiln that she used in the studio. Though not large, the works are enormous by the standards of handbaked enamel, which fits the sign-like quality of her abstract drawings. Each portrait-size composition is split down the middle, and the usually symmetrical images often have a sexual connation – such as two butt cheeks touching, or an erect phallus. She named each piece after a stanza in Sylvia Plath’s 18-stanza poem, “Fever 103.” 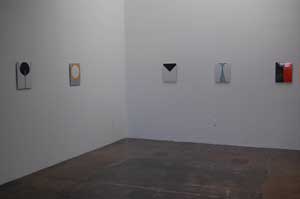 “Applying the pigments was like putting powdered sugar on a cake,” Muller said. “I started with lots of drawings, but they would change as I worked with the enamel. I am interested in body references, and I wanted to come up with an entirely new body of work. In some ways, it is related to Bauhaus because I am adapting an industrial technique to make fine art.” 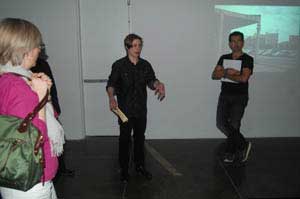 Liden used nothing more than a video camera, a tripod and her own body to create the startling “Corps de Ballet.” Liden is known for her video performances of her throwing or smashing things, or dancing wildly in public spaces or abandoned buildings. Her approach is more subtle in this suite of videos, but nonetheless radical.

In one, she climbed up a column supporting a roof on an old garage with a downtown hospital in the background. All you can see are her arms and legs wrapped around the top of the cement pillar, which she slowly descends as oblivious drivers pass by. One dark night she climbed a light pole in a parking lot, which is only obvious after you see shadows move and recognize that she’s wearing a hoodie. She holds a Mercury-like pose, and then tumbles across the top of a parking garage at twilight in another video.

These three videos are shown together as projections in her upstairs studio installation. A giant sheet of tarpaper stretches across most of the studio, forcing viewers to either step on it or avoid it, a subtle reference to the way public spaces can direct our actions. Also made of tar paper are large, columnar sculptures suspended from the ceiling. A soundtrack features a piano composition by Askar Brickman accompanied by bird songs recorded outside the studio, mostly the cackles of grackles.

Downstairs at Artpace, Liden’s fourth video is being shown on a large-screen TV. With her back to the camera, she sits at a desk, listening to what sounds like Neil Young. Then, she stands up and walks over to a large trash can and climbs in headfirst. Dissatisfied, she climbs out, and gets into the garbage can feet first, sinking down out of view while the Rolling Stones’ “Gimme Shelter” plays. 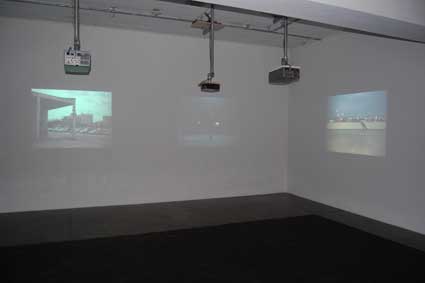 Shipp Steps Down at SHSU, Graybill’s Lawsuit to...