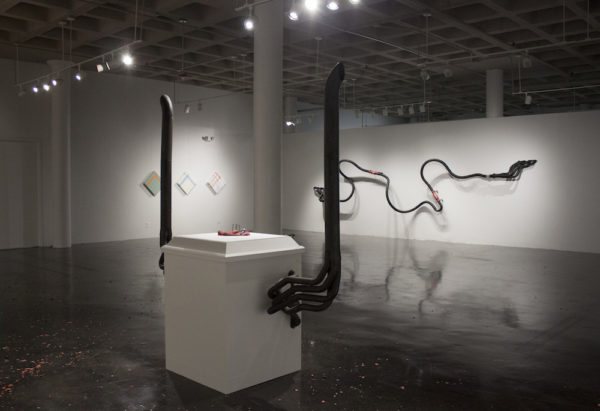 None of the materials Buster Graybill has put into his current gallery show were meant for indoor use: exhaust pipes, a skeet trap, the patterned webbing of lawn chairs, shuttlecocks, flyswatters and a greasy socket wrench. His show, at the Southwest School of Art in San Antonio, is called Leisure Lines, and here Graybill mixes his usual tongue-in-cheek redneck sensibility — nearly always a gorgeously formalist one — with something more refined, as though dad drove his semi over to mom’s backyard barbecue where she’s hosting her city cousins for the day.

The show is sly and funny, as Graybill most often is, given how surprising he can be with his re-invention of the stuff we associate with the macho, the rural, the populist. Graybill has backwoods Texas’ number, and understands some of the most profound hostility toward art is found in this headspace. But his subversion isn’t disrespectful or snide; it also speaks to what’s fairly laid-back in the attitudes of those who don’t have time for or much access to art, which is sometimes really closer to “live and let live,” or even “do unto others… .” Patton Oswalt once broke down the difference between Good Guys and Bad Guys based on fundamental attitude, with the educated city dude spinning PC language to the point of dizzying bigotry, and the blue-collar dude using very non-PC language to essentially say “Hey, you do you.” I see this good-natured deflation of high-mindedness in Graybill’s work, and it works so well because at heart he’s a sophisticate, and the art he makes is visually incredibly satisfying. 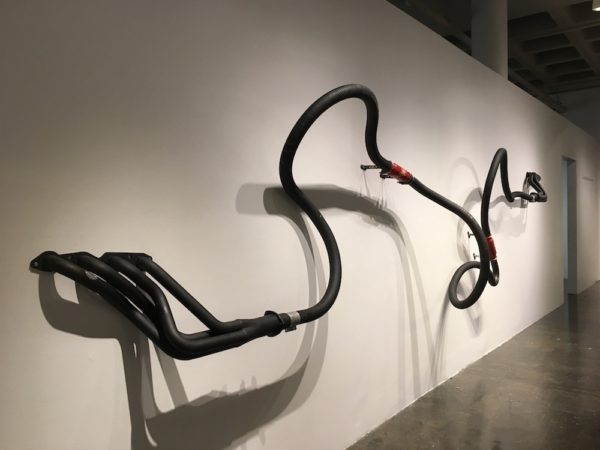 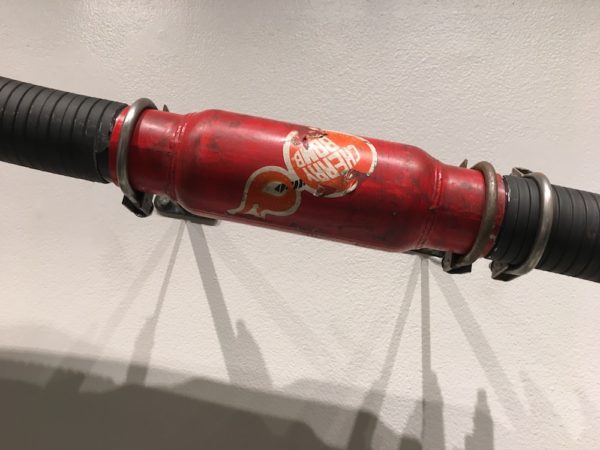 With that, Graybill certainly knows how make excellent objects and installations with the kinds of things we never associate with art. His roiling exhaust-pipe that snakes along one long wall of the space is a calligraphic beauty. I’d guess there are levels to enjoying Graybill’s work based on how much you work with your hands (or in a garage); I can’t parse precisely the smooth, oily connectors and faded decals on the piece, but I get the gist, and the pure abstraction of the whole works all the better for me in this manner of gentle osmosis. 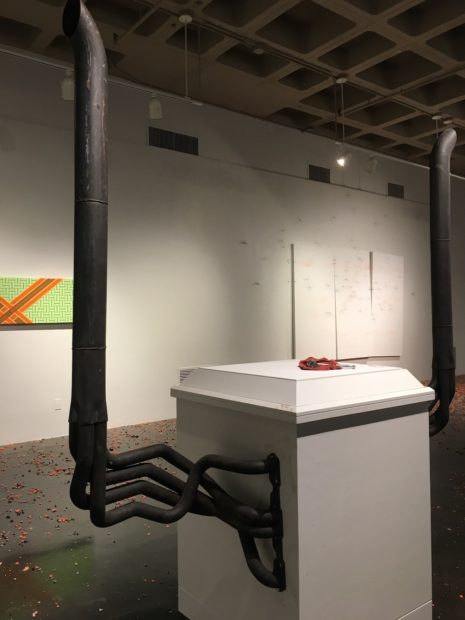 The same goes for the pair of elaborate semi-truck exhaust stacks attached to a proper white museum plinth, as though the plinth itself is on the brink of turning into rolling coal. It’s funny, but it’s also formally impressive, and it feels like he’s upended the showiness of trophy-hunted elephant tusks without hurting anything. The piece is a sort of glorious visual framing device for the show, the not-so-pearly gates. 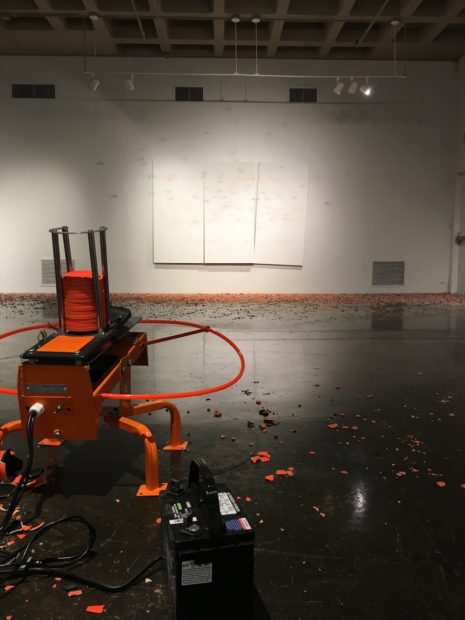 The skeet trap sits on the floor, off-center in the room, and much of the gallery’s floor is littered with sharp and shattered clay shard. It’s clear Graybill had some fun during the install; he aimed the trap at some big blank canvases on one wall, and there must be a few hundred spent and broken skeet targets. The canvas has seen better days. In contrast, his lawn-furniture webbing pieces hang on the walls like paintings, and are perfect. Ultra-clean, gridded, and elegant, these are the Graybills you can take home with you. He’s festooned a few (again, very formally) with frisbees and such, and it’s surprising how much these ultra-familiar materials conjure the sweaty, mosquito-swarmed summer while looking so tight and dapper. These aren’t afterthoughts. They’re excellent distillations of just how careful Graybill is with every decision. 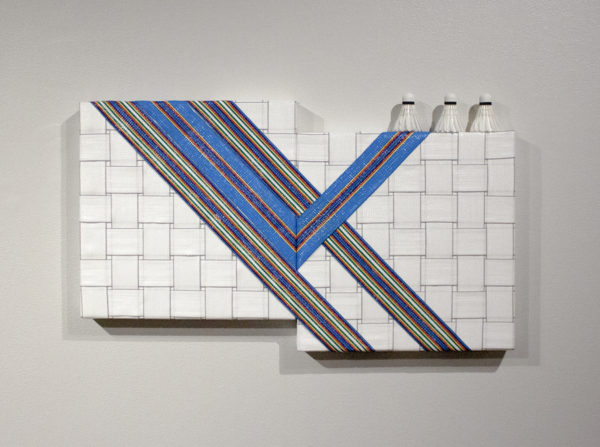 Graybill is young. He’s teaching now at UTSA and I’d guess they’re lucky to have him. Texas isn’t short on artists who know how to play with the tropes of machismo and dirt-road culture, but Graybill has already been doing it really well for more than ten years, and it still feels like he’s just gotten started.