Send in the Clowns (the Greatest Show on Earth)

Never let me forget that my total effort is to cheer people,
make them happy, and forget momentarily,
all the unpleasantness in their lives.

And in my final moment,  may I hear You whisper:
“When you made My people smile,
you made Me smile.”

The band on stage was introduced as a family act.  At least that’s how the lead singer explained it.  I found that hard to swallow but I liked the idea.  My guess was that he was in his 50’s.  He had a gregarious banter, was very fit, shaved head, black t-shirt with sleeves torn off at the shoulders, tight jeans with boots and big pink Elton John-like glasses.  The bassist, his wife (allegedly) could win any Kim Gordon look-a-like contest.  The lead guitarist/alleged son (looked too old, no resemblance) had shredded dye-black hair, shimmering gold shirt, studded neck gear and a cigarette.  I missed the relationship of the drummer.  Why the sunglasses?  The two dozen or so fans who crowded the front of the amp jammed staged, blankly oogling, swaying and shaking, kept their black coats and sweaters on as the walk-in traffic let in the cold, rainy night through the open front door.

This was the darkened, chaotically typical scene as I tried to photograph the current clown exhibition at notsuoH.  All the clowns faced stagewards.  The only way to document the show was to impede myself and my tripod among the subdued pseudo mosh pitters and face the other way trying to avoid bumps and kicks.  I surmised that most of the glances my way were more curious than annoyed.  Most anything is allowed and tolerated, even celebrated, at notsuoH.

I asked Jim Pirtle, artist and proprietor/curator of notsuoH, to sit down with me and discuss the current exhibition of clown art.

“Okay.  We’ll come back to that later.  Let’s get the other details first.  The show opened on December 26, right?”

“And when does it close?”

“Okay.  So, how did this show come about?  Where did this stuff come from?”

This is the complicated, non-verbatim story as explained by Jim.

Every Wednesday night at notsuoH is Poetry Night which is hosted and organized by Mike McGuire.  One recent night, Mike shared with Jim’s friend, Cheryl, that she looked strikingly similar to his mother who recently died.  So much so, in fact, that he guessed that Cheryl might even fit in all the shoes left by his mom that he still had not divested.  Mike extended an invitation to Jim and Cheryl to come by his late mother’s River Oaks house for Cheryl to try on any shoes she might like to have.  And that’s how Jim discovered the extensive clown collection of Mike McGuire’s mother.

It turns out that Mike’s father, Ben McGuire, whose business was in real estate, had dealings with the former Judge Roy Hofheinz of Astrodome fame.  Jim related that in the 1960’s Ben McGuire was somehow involved with Hofheinz’s acquisition of the Ringling Brothers Barnum and Bailey Circus – the self-declared Greatest Show on Earth.  Whether Ben McGuire actually partly owned the circus is not clear, but that’s how Jim explained it to me as told to him from Mike.  In fact, Jim said that Mike said, Hofheinz planned to use the Astro Hall, which no longer exists, as the home of the Ringling Brothers Circus.  And that’s the whole reason it was built.  Again, this was in the 1960’s when the idea of families going to the circus was still viable.  The circus would be another cog in the Astrotainment complex.

So, in some mysterious way, lost in the fog of family history, the McGuires began their circus and clown collection.  They liked circuses and clowns.  Clearly.  And in the same way people collect plates from states or thimbles with images of country music stars, the McGuires collected clown art.  A lot of it.

The future of the collection, Mike indicated to Jim, was in limbo.  As often happens with children of deceased parents, they don’t know what to do with all the stuff their parents leave.  After a little discussion Jim offered the win-win solution of notsuoH as a venue to showcase and sell the collection for Mike while providing a ready-to-go art exhibition for Jim.

The exhibit begins in the front window of notsuoH with an installation of clown toys, dolls and statuettes installed in a glistening bed of faux snow which I think are actually shards of tempered glass, remnants from a recent broken front window fiasco.  On the wall behind this scene is a Ringling Brothers poster that features a photographic image of the famous clown Lou Jacobs who performed for the Ringling Brothers circus for more than 60 years.  It’s a sweet little arrangement, more akin to an east Texas storefront “antique” display than sculpture, but in the context of its setting and with little imagination, it branches out into other aesthetics.  Lou is fondly shepherding his little flock of tchotchkes in a proud “Aren’t we funny?” way. 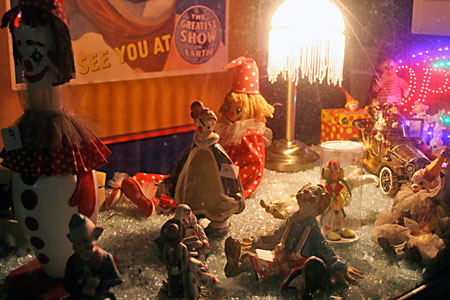 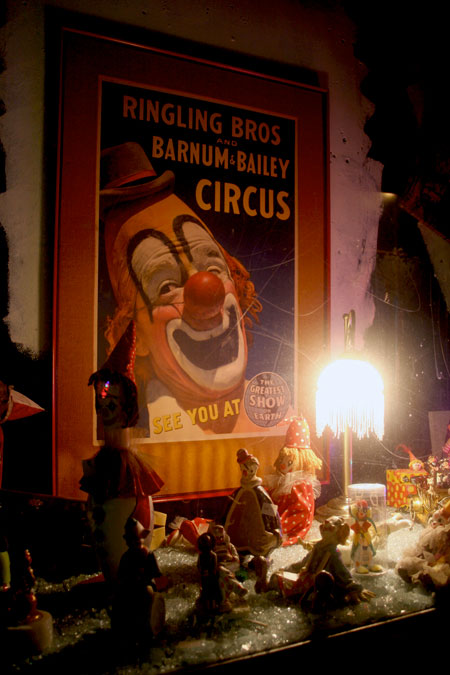 Just behind and to the right, adjacent to this front window is something more akin to “Killer Klowns From Outer Space ” and, I suspect, not from the McGuire collection.  If these clown dolls did come the McGuire collection, Jim got his hands on them.  It is a heap of tangled doll clowns enmeshed in some sort of metal armature with a clamp light illuminating it all in a ghastly way.  It looks like an old Kienholz piece sans drippy varnish.  Creepy.  Fun! 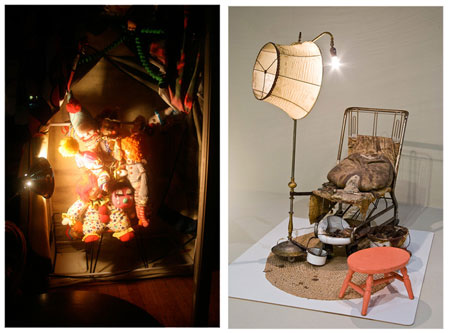 Most of the rest of the show is inside, hung salon style on the left (south) wall as one enters notsuoH.  There are paintings, prints, posters and sculpture.  Most are of clowns, some not.  Truth is, I’m not completely sure exactly where the show begins and ends which is in keeping with notsuoH’s blurring of lots of boundries.  It can be hard to see too, especially at night when the lights are low. 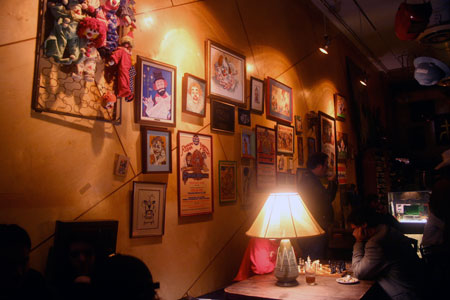 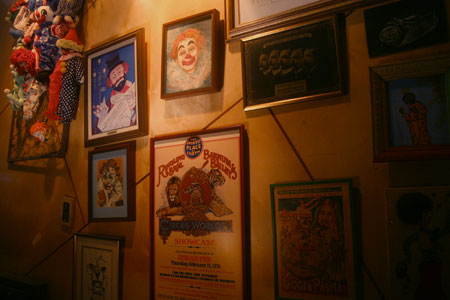 I think it’s all for sale but even Jim isn’t completely sure of that.  These are unimportant details in the notsuoH Gallery.  In any case, I bought what is probably a worthless, but nevertheless great, shag rug bath mat clown.  $15. 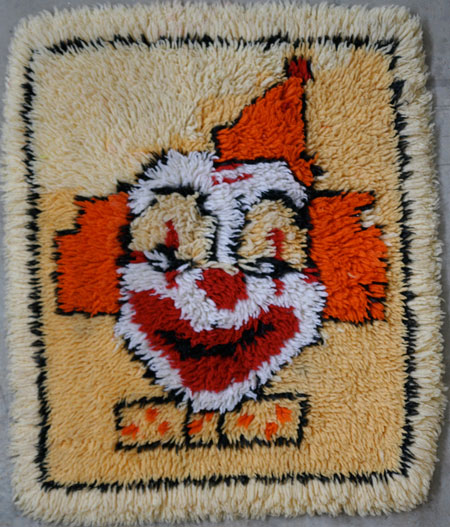 Because I’m not a clown art expert, I’m not sure which things may be truly valuable, if any, and which aren’t although I’ll bet the Ringling Brothers posters are true collectors items. 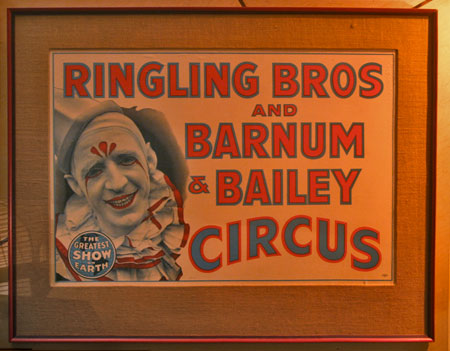 There’s a Red Skelton print that’s made to look like a painting with an imposter impasto that’s hard to detect except up close.  It’s exactly like something you’d see at the rock-bottom art sale at the Marriott Motel.  It’s not signed but you can bet it’s authentic because it has his trademark on it.  It’s one of the few million or so left in the world.  You can tell the McGuires prized it because the frame has a gold plaque on it, a further sign of its pedigree. 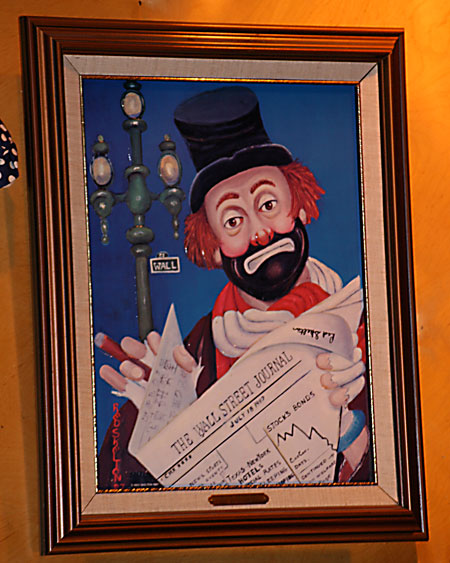 Just to its left is another clown doll creepfest sculpture, this time with them jumbled together on the top end of a small crib sized box spring.  Mike Kelly meets Rauschenberg “Bed.”

(L) untitled clown sculpture at notsuoH…(C) Bed, 1955, Robert Rauschenberg…(R) More Love Hours Than Can Ever Be Repaid and The Wages of Sin, 1987, Mike Kelly

Jim pointed out to me the similarities of three clown portraits, all paintings – real paintings with real paint.  Two are smallish measuring not more than a foot square.  The other, hung high above the bar on the west wall, is perhaps the best painting in the whole show.  It seems like a true piece of art painted by someone who knew what they were doing.  It’s hard to inspect very closely, however, as it’s hung about eight feet up.  All three of these portraits are of clowns in whiteface with shaggy shortly cropped orange hair dressed in a costume with a fluffy/frilly collar.  They all have the same heavy black eyebrows, red button noses, and melancholy, droopy-eyed expression with a smear of red lips.  None are dated and only one is signed by someone named “Talessandra.”  I have yet to discover if this image is a depiction of an actual clown or if it’s an image of the ultra-typical kind of clown that Sunday painters paint when Sunday painters paint clowns.  Could this be the all time primordial über-clown?  Jim didn’t know either. 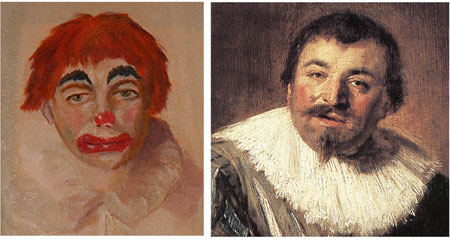 Jim talked about the history of clowns, the Commedia del Arte, the difference between clowns – whiteface, Auguste, tramp.  Jim also explained where slapstick comes from and what a slapstick actually is.  Throughout the evening he kept quizzing people if they knew the difference between a hobo, a tramp and a bum and then proceeded to explain if you didn’t know.

My discussion with Jim concluded as he indicated that he really didn’t know what else to say.

“Well, do you have a title for the show yet?”

clowntsuoH is on view at notsuoH Boxing Day, 2009 through Groundhog Day, 2010

Michael Galbreth is an artist living in Houston. He is one of The Art Guys.

Did I read it too fast or did you forget to mention Pogo the clown…John Wayne Gacy, Jr?

Michael,
I hate clowns, they scare the hell out of me, but I loved this article!

By the way, have you heard of Clowns for Christ? http://www.freewebs.com/jeszmesparky/

Who deleted asshole’s comment? It was relevant ( to me anyway). You people seem to consistently have problems seeing bigger pictures…., abstract, representational, conceptual or simply formal. I hate clowns and men in Santa suits, mostly anything human in costume. Although …I force myself to wave at the person in the gorilla suit pushing a vacuum on August days here locally. If he/she isn’ t smoking he usually waves back.

I wish someone would delete all my posts as soon as I post them.
These posts keep me awake at night.
Like bad dreams.

I recently bought in garage sale the same clown here in color beside the white and black,this painting of the killer clown came from Sao Paulo Brazil in 1997,seeing this page i saw the same painting hanging in an exhibition in same page, this canvas on oil has the same characteristics and measurements, even file # as 2182, searching in Google i knew this painting was missing, i would love to know if any of this is true, this painting is well painted like original and the artist’s name is Allans, please i would appreciate some information from someone ,thanks