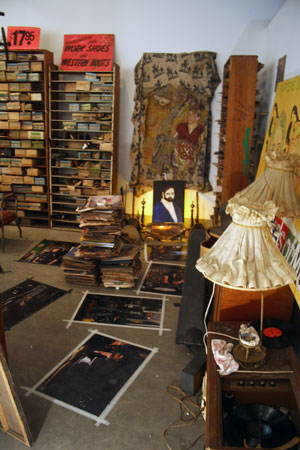 The famous shoe boxes of notsuoH

As we become older, we begin to lose things. It’s common knowledge that most of us accept. We lose memories, loved ones, keys. Yet even amid the vast expanse of existence, there are things we refuse to let go of (or perhaps, that refuse to let go of us). Lyrics to a long forgotten Wham! song, an extensive collection of vinyl, or the phone number of an ex-boyfriend. For me, it could be the sight of several wedding dresses suspended from the ceiling of one of the performance spaces at notsuoH, as a kid. I was 16 and my friend’s band was headlining a local showcase. The white and cream-colored gowns, each from a distant decade, seemed to float in midair the same way reassembled dinosaur bones might be found in a museum (and with the same prehistoric implications). The long sleeves and silky train of each dress hung lifeless in the humid air, and with each shitty power chord churning out of the speakers, I found myself equally repelled and seduced by the bar/venue/cafe/performance space/chess hall/shitstorm which several artists and poets called their cultural home.

For those of us growing up or living in Montrose and the Heights, notsuoH was, and continues to be, an institution. My friends and I often found ourselves there well into the morning, playing chess with a handful of tattooed strangers and, after enough coffee, a few playwrights. The space belonged to painter and performance artist Jim Pirtle, and was nestled in a vintage 1893 three-story walk-up, in what was then a quiet, untouched and rail-free stretch of Main Street in downtown Houston. The space itself was an ever-changing mind-fuck of found objects—beer bottles, bikes, ancient magazines, Christmas lights, a sea of wooden coat hangers—and hundreds of other things which, when seen together, appeared more like garage sale items than peripheral décor. 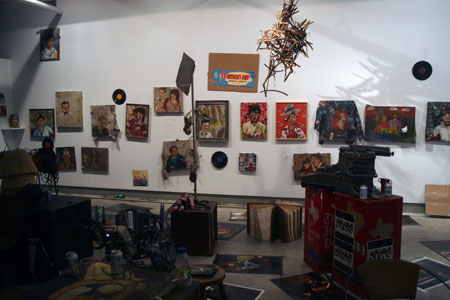 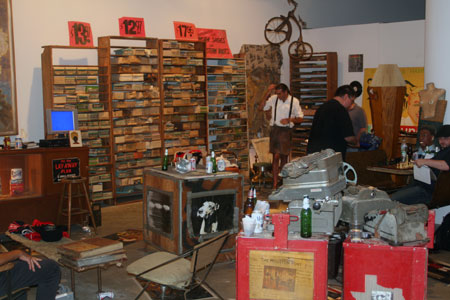 At the very core of both Pirtle and notsuoH is a sincere fondness for overindulgence and the absurd. Pirtle’s performance persona born in the 1980s, Stu Mulligan, frequently ingested heaping amounts of mayonnaise and picante sauce while mimicking the mentally ill and singing lounge music (and then vomiting in the process). And though it was Robert Altman who was famous for making a film about a child who wants to fly inside the Astrodome in “Brewster McCloud,” it was Pirtle himself, cradled in pillows, who attempted flight by jumping from the second floor of a Houston building in 1993, fracturing his back. It was during this time that the artist met Nestor Topchy, with whom he co-founded a theater and performance space, paving the way for notsuoH proper.

For his current exhibition in New York, curated by “America’s Greatest Artists” The Art Guys, Pirtle implored a bevy of notsuoH regulars to help him create an exported recreation of the historic venue at CUE Art Foundation in Chelsea. Pirtle and Houston poet Salvador Macias drove a packed van the 1,600 miles to New York and slept at the gallery during the installation. The result is a seemingly chaotic collection of nostalgic post-readymade detritus that is nothing short of amazing.

A rusty tricycle is suspended from the ceiling, adjacent to an entire wall of dusty bookshelves, filled to the brim with old, ratty shoeboxes (and, in many, their respective shoes). An entire row of wooden theatre seats traverses another wall, beneath the metal labyrinth of a late 1940s circuit board and the blue torso of a limbless mannequin. Half-empty cans of Budweiser and Modelo Especial are scattered across the room, on tables and on top of old Public News and Houston Post bins, as if left there 15 years ago when each publication still existed. A vintage booth rests in the center of the gallery (the very one my friends and I frequented years ago), complete with an old chess set resting on its table. The floor is randomly taped with photographs of notsuoH regulars-artists, hipsters, writers, poets, philosophers, models, strippers, slackers and the like—which offer the unfamiliar viewer a peek into its many varied personal histories. Moreover, visitors are encouraged to inhabit the space the same way they would in Houston-and with the same haphazard familiarity. 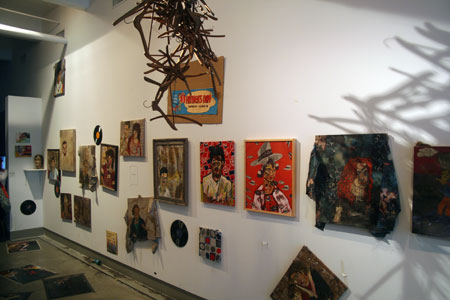 Portraits on polyester by Jim Pirtle 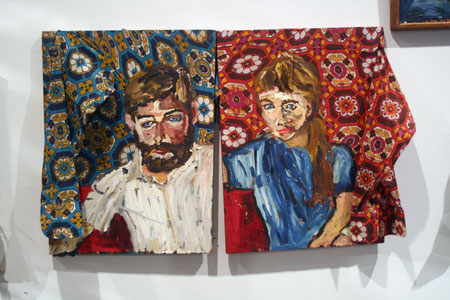 The east wall of the space may be the most untouched by comparison, covered with a salon-style smattering of Pirtle’s oil portraits on polyester—a fabric the artist uses as his own canvas, thanks to a decades-old penchant for thrift stores and a seven year period when Pirtle wore only polyester. Incongruous patterns of the fabric, which he once wrapped around his home in the early 1990s a la Christo and Jean Claude, make for colorful backgrounds for subjects that are crudely painted, composed of messy blotches of peach and dark cream-colored paint.

“It’s a graveyard of sorts,” says Macias, who quit his job and sold his car for the opportunity to come up with Pirtle. “Here, nothing is what it seems, nothing is arbitrary and nothing is accidental.” 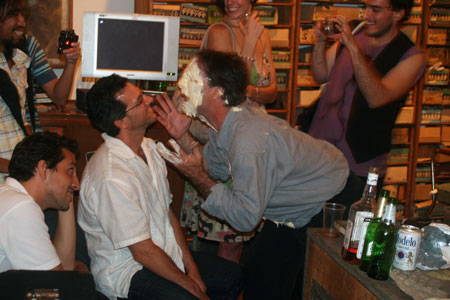 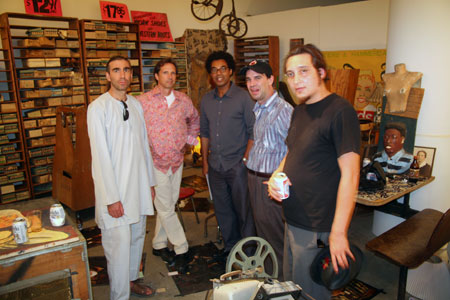 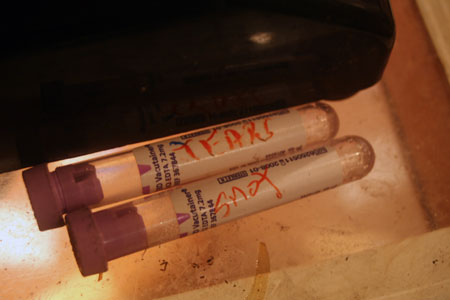 Pirtle’s reincarnation, his first solo show in New York, is installed with a refined sense of nostalgia, and the inherent character of the legendary locale literally knocks you on the head (with a suspended nest of coat hangers). Odes to Duchamp-esque readymades clamor loudly throughout the space, as they did in Houston, but with a heavy dollop of utilitarianism. Social sculpture with a wedge of lime, so to speak. Going to notsuoH has always been a journey, with a tangible beginning and end, in which all characters met along the way inevitably present a new set of expectations for the next visit. Fortunately, the new bar is set high.

Evan J. Garza is the curator at the Center for Latino Arts in Boston.