Last Wednesday through Sunday, April 9-13 Houston was graced with the first CounterCurrent Festival–five days of experimental performance organized by the University of Houston’s Cynthia Woods Mitchell Center for the Arts. It was truly collaborative and cross-disciplinary, incorporating everything from dance to theater to music and sound to parades, as The Mitchell Center sought to push the boundaries of what the public can and should regard as performance art. As with any inaugural program, CounterCurrent came with its fair share of hiccups: frozen projectors, incorrectly looping sound works, and misbehaving PowerPoints occasionally detracted from seamless engagement. Much of the work could have been more evocative, more pointed and more incisive, but it was refreshing to attend a series of events that challenged the stereotypes of performance without people just getting naked and smearing things on themselves. Hopefully the Mitchell Center will continue nurturing CounterCurrent, giving it the time it needs to mature and evolve.

On Wednesday morning, I was excited to tackle The Invisible City, a site-specific narrative by Lacy M. Johnson, Josh Okun, and Rob Ray. My first stop was CounterCurrent headquarters, where I picked up a “survival pack” consisting of water and a Metro day pass, a phone charger and a koozie-encased bottle of Purell hand sanitizer. I climbed onto the MetroRail and proceeded to the project’s first site, Allen’s Landing.

There I encountered Johnson, an amiable blond woman who asked me if I needed a buddy. She suggested we embark on the journey together, noting that the project’s website suggests traveling with at least one other person. Luckily I opted to stay with her as opposed to going it alone—as the day progressed my ineptitude at following simple directions became increasingly obvious, and it was helpful having her there with me.

Johnson suggested I begin reading the essays accompanying The Invisible City, a series of writings tied to specific coordinates within the city of Houston. I would have to read each excerpt at each location to fully understand the work. The writing tied to Allen’s Landing was a brief recalling of Houston’s history, starting with its birth as a settlement at Allen’s Landing and, eventually, a meditation on the city’s rabid desire to erase itself and rebuild, leaving a palimpsest of memory and history.

As I descended the stairs overlooking the bayou’s lush greenery on that crisp spring morning, with an erect corporate sky line as backdrop to errant clothes and shards of glass, with the stink of urine-saturated concrete pervading my nostrils, Johnson’s statement could not have rung more true. It was beautiful. 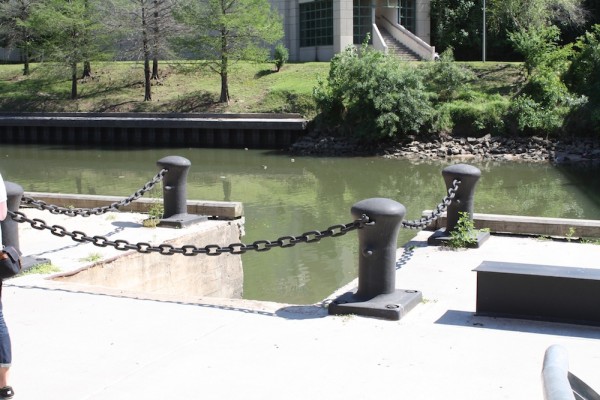 Certainly Johnson, Okun, and Ray culled inspiration from the Situationists, whose dérives (the literal translation meaning “to drift”) were a form of critical wandering, of fostering awareness of a city’s invisible boundaries, its psychogeography. While missed busses, unexpected conversations, or the possibility of just getting lost made it feel like a mode of wandering, The Invisible City was a highly orchestrated, premeditated move through less obvious parts of Houston. 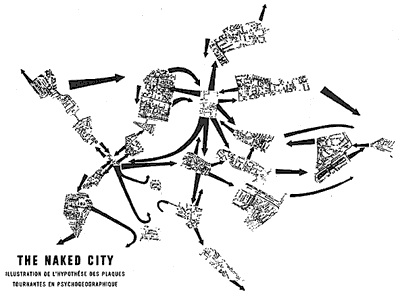 An example of a map of a derive, taken from sf0.org

For a work built up as a winding, interlocking narrative, each excerpt was fairly bare-boned. Regardless of the location, the modus operandi stayed the course: click on the link, read an historical anecdote, and get fed a dose of social didacticism. This was my biggest frustration with the work: are these didactic moments really germane to Houston, or is Johnson just using these places to push a social agenda? Does telling us that the jails are overcrowded and that pollution is bad actually describe this particular city, or just cities in general? 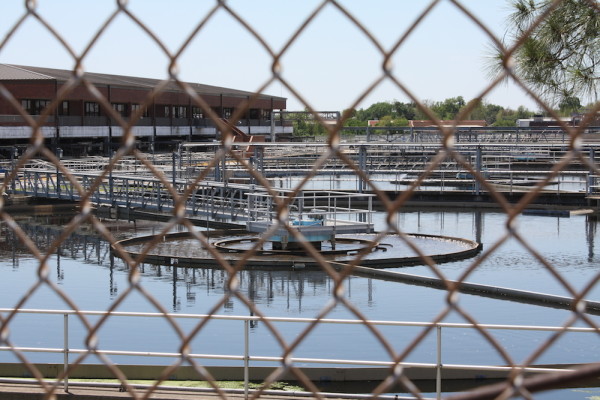 View of the sewage treatment facility

It’s not just that these didactic moments are heavy-handed; they distract the participant from the truly authentic moments of the tour and demonstrate the artists’ lack of confidence in the real power of the work. The act of simply walking and using public transportation as opposed to driving generated a multitude of the thoughtful, exciting, mundane, uncomfortable, critically engaging moments that Johnson, Okun, and Ray were after in the first place—moments vastly more nuanced and thought-provoking than the writing could possibly provide.

As Johnson and myself—two young(ish), white women—walked past Clayton Homes, a rough neighborhood that got at least four shout-outs on the hard core rap CD I’m currently listening to, we felt worried, and we talked about it. Would we be stupid not to be concerned for our safety? Or are we just racist?

As we waited, and waited, and waited for the bus, blabbing on about the particulars of Johnson’s PhD and my master’s thesis, it became increasingly obvious that we didn’t quite fit, that what we were doing made us somewhat of an other. What does it mean to cross invisible boundaries, to quietly invade other people’s space? Their everyday lives? Are we actually participating and understanding someone else’s day-to-day experience, or is this instead a form of condescension, a spectator sport? These questions that no one wrote down are the real ones, the ones that have uncomfortably stayed with me almost a week later. 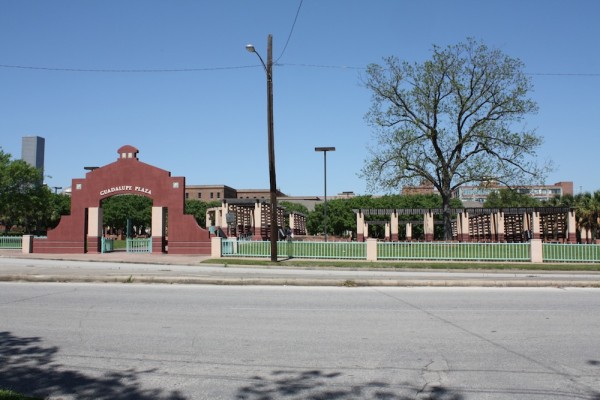 View from our long wait at the bus stop

To be fair, Johnson’s desire to telegraph hard-hitting lessons probably stems from a legitimate anxiety. The Invisible City is open to the general public, meaning that anyone could show up, go to a location or two, barely pay it a thought, and blow the whole thing off. Surely there were people who did just that, but then there were the two college kids who joined us later. Typical kids in their early twenties looking for something to pass the day until it’s time to go drinking later, they got lost almost immediately, rented their own transportation, biked through unfamiliar territory they were obviously uncomfortable with, and found their way back on course. Yes, people can be disengaged and predictable, but other times—like these guys—they can be thoughtful, resilient, and surprising.

Not all of Johnson’s stances read as saccharine. There were indeed gut-wrenching moments, like our final stop at J. R. Harris Elementary on Broadway. We had just read sinister statistics: children living in that heavily polluted area are fifty-six percent more likely to develop leukemia, and as we picked our heads up from the reading, school let out, and a bunch of unknowing kindergartners ambled out the doors to meet their parents at the end of the day. We stood mostly in silence, visibly upset, with nothing left to do but go home. 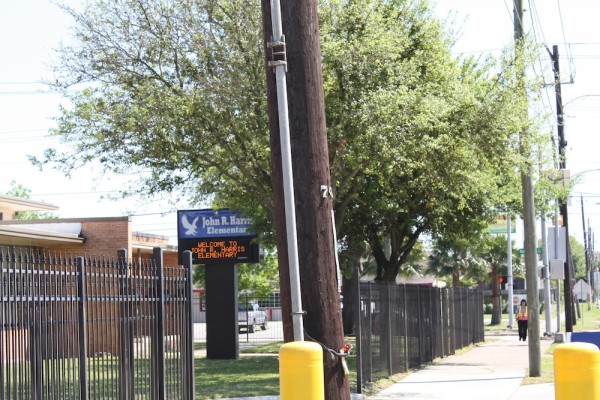 Sunburned and sore, the four of us climbed onto the bus and clicked the final link on our phones. The project’s last excerpt ended with a gibe: either sit in silence, or say something, to somebody. I remember feeling annoyed and defiant. I thought, I’m going to sit here and not say one word. Not one. Fucking. Word. Not two minutes passed when an older homeless man with murky blue eyes and a friendly face stepped onto the bus, sat down, and dropped his cufflinks. As I picked one up for him, he engaged me in conversation. As he stammered on about hard times, positivity, and silver linings, I nodded stupidly—my three or so hardships in life hardly equated to his experience, pain, and endurance. But it was here that I realized the point: regardless of its ugliness or problems or differences, Houston is filled with people and places that will to offer up something with willingness and enormous generosity if we make the effort to meet them halfway—and stay quiet long enough to really listen.

CounterCurrent, organized by the Cynthia Woods Mitchell Center for the Arts, ran from April 2-6, 2014. Invisible City ran each day of the festival.