by Bill Davenport May 5, 2014
FacebookTwitterEmail

Cows, bayous, pumpjacks and pelicans: have we missed anything? Steve Rowell‘s portrait of the Gulf coast in Uncanny Sensing (TX Prototype) is as stereotypical as it is true to life. Pushing aside the forest of facile conceptual hooks and pseudo-science that guard the piece reveals a beautifully filmed, picture-postcard tour of the unkempt spaghetti of mud bars, marshes, railroads and oilfield equipment that dissolve gradually into the Gulf. Those familiar with the area will recognize a few locales: the San Jacinto monument, the Houston ship channel, Pasadena’s oil tanks and the cinnamon-colored Galveston surf. 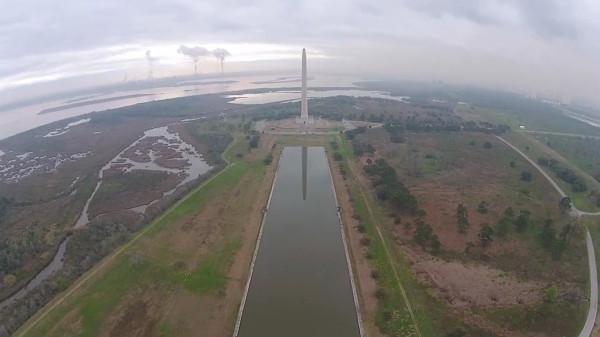 A drone’s-eye view of the San Jacinto Monument

The installation consists of three looping videos, a slideshow, and some burst ballooons in a darkened room. The largest and longest of the videos is the centerpiece: footage shot from a hovering remote-controlled drone mounted with a fish-eye lens. The camera pans across marsh, bayou and dirt access roads giving a map-like picture of the impossibly complex, spongy terrain difficult to obtain in any other way.

The eerie monotonous soundtrack of the drone video provides most of “uncanny” quality promised in the title. Whining chords, derived somehow from air pollution data, overlay the images with tension, as if the camera was tracking down a dark hallway in a slasher flick, rather than scanning vacant marshlands. It’s a sountrack that would make anything seem fraught with hidden evil. Using digitally processed scientific data as a sound source is trending: a couple weeks ago, at the spring equinox, I heard similar sounds at the Rothko chapel, generated from solar weather by Jeff Talman and astrophysicist Dr. Daniel Huber. 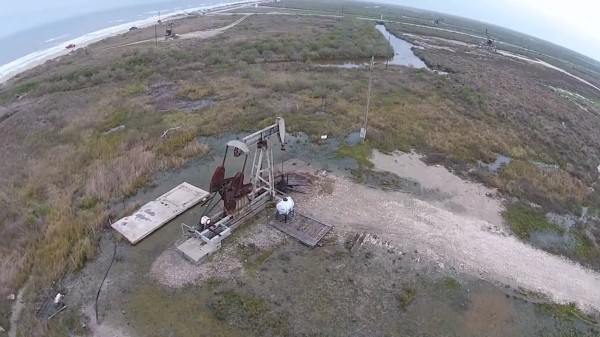 Although Rowell and his little white car appear in several shots, the coast is mostly deserted. Shore birds and waves provide most of the action as we watch Rowell flying his new toy–chasing down a spoonbill, panning across the ship channel, hovering over the surf. He wisely doesn’t fly it out over the ocean. Several shots show pumpjacks performing their iconic oil-country ballet. In one (comparatively) dramatic sequence, the drone surveils a brown cow in a swampy paddock, and the cow actually looks up!  Filmed in winter, on overcast days, Rowell’s footage is missing the sun-smitten steaminess that fits this landscape like a coozie on a can of Lone Star. The way he films it, Galveston County might as well be a Scottish moor, except for the brown water and endless flatness. 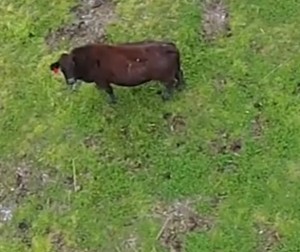 The best thing about the drone video is the way it lets you peek into the world just over the fence, or across the canal, into places that, though only a couple yards from paved roads, are as inaccessible as the Australian outback. Flying low and alighting on scattered, rusty outposts of human technology, the drone shows us just how little of this unloved landscape is actually tamed.

The two subsidiary videos, projected side by side, hammer home the odd, worrisome juxtaposition of natural and man-made, all too familiar from the works of photographers like David T. Hanson or Richard Misrach, without adding much to the old theme. It’s especially easy to portray the industrial bits of coastal Texas as brimming with environmental crimes, and in spots, Rowell can’t help himself: one shot of smoke-belching chemical towers just behind a kiddy play structure begs for the expectable horrified gasp. 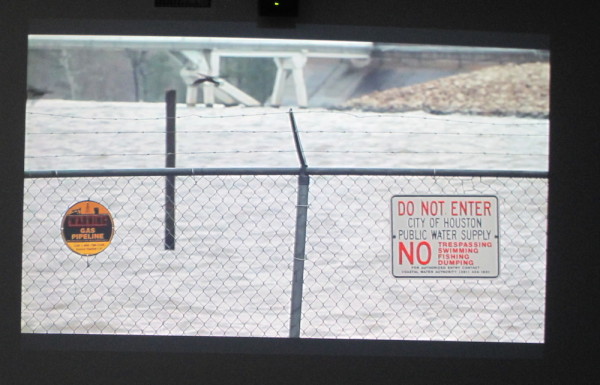 Before his solo career, Rowell did photography with the collective Center for Land Use Interpretation, known for their exhaustive catalogs of similar forlorn industrial landscapes. He covered some of the same places with CLUI in 2008-2009 when he was in residence at the University of Houston for their Texas Oil: Landscape of an Industry project. As befits the group’s cameraman, Rowell’s real interest is in landscape photography, with a wonderful sense of texture and place. He can’t help focusing on the reflected clouds in the settling sewer-water, or the billowing drama of smokestacks at sunset. The drone’s novel viewpoint helps him endow a familiar landscape with new interest. Throw out the pat environmental parables, the generic haunted-house soundtrack, and philosophical pretensions, and the piece is a romantic homage to a fascinating place, spiced with corroding industrial hardware that could have been placed there for picturesque effect, like the ruined castles in 19th century pastoral fantasies.

Uncanny Sensing is like Godrey Reggio’s 1982 film Koyaanisqatsi, but without Philip Glass to orchestrate its repetitive tones into hypnotic music. It wags the same moralistic finger at nature burdened by man, and despite gobbledygook about “post-natural landscapes,” “the anthropic principle,” and “cybernetic ecology” in the wall text, Rowell’s installation, like Koyaanisqatsi, resolves into an enjoyable, ultimately affirmative document. Whatever its sins, the Gulf Coast, as Rowell shows it, is darned interesting to look at. One sequence is nothing but a pattern of latte-colored wavelets lapping the sand with their steamed-milk tongues, and that ought to be enough. 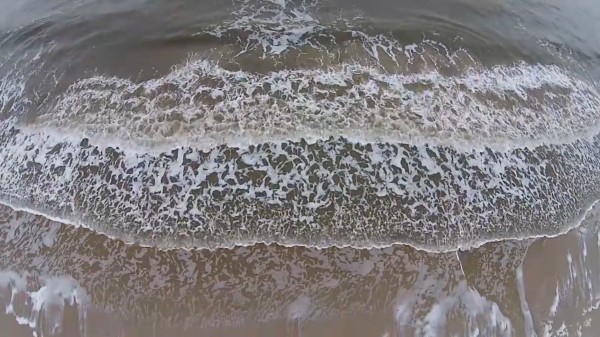 Uncanny Sensing (Texas Prototype) by Steve Rowell was shown at the Bermac Building in Houston on April 9, 10, 13 and by appointment through April 30, 2014, as part of the inaugural 2014 CounterCurrent festival, sponsored by the University of Houston’s Mitchell Center.