by Paula Newton May 28, 2013
FacebookTwitterEmail

As part three of his “Death Row Projects,” Martin Martensen-Larsen plans to take the executed body of Travis Runnels, who is now alive and well and residing in a Texas prison unit, and have it preserved so he can then paint the body with gold to be part of a larger installation—a human-scale version of the Lincoln Memorial. Martensen-Larsen explains the piece’s title, “The Unifier”:

Lincoln saved the union and saved the self-understood purpose of America. He therefore represents the Redeemer, the Unifier. The executed person redeems the blood sin of the society. Kant said that a society that does not execute a murderer is immoral. So I will show how the death row inmate is actually one of the most valuable persons in the society, contrary to how he is portrayed in the public debate. 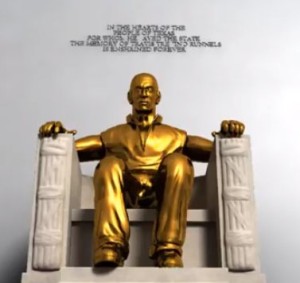 Death row inmate Runnels has already pledged to donate his body to Martensen-Larsen, though no date has yet been set for his execution. In fact, Runnels also donated the materials for part one of the series, “Curtainfall.” In 2011, Martensen-Larsen sold five front-row tickets, normally reserved for family and friends, to Runnels’ execution in an online auction through curtainfall.com (the site is no longer active). Three of the bidders wish to remain anonymous, but two of the tickets were sold to controversial Norwegian artist Morten Viskum. Runnels has asked that the approximately $12,000 raised (which will be paid after the execution) be donated to a shelter for homeless animals.

Part two of the series, “Redeem X,” was exhibited in a Danish church last year and involved the ashes of another executed convicted murderer from Texas, Karl Eugene Chamberlain. The ashes were exhibited in an hourglass, which was turned over every time it ran out. The idea emerged from Chamberlain’s last words before his lethal injection: “I wish I could die more than once to tell you how sorry I am.” Because of the “religious undertones in American capital punishment,” Martensen-Larsen chose to exhibit the work in a church. “The execution of Jesus gave man absolution,” he says. “Now we execute people for them to receive absolution, but are we willing to give them what we received?” 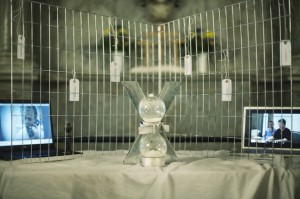 The series, of course, has faced resistance. Mickey Gjerris, of the Danish Council of Ethics has been very critical of Martensen-Larsen’s work: “He takes something that is very important only to create attention about him.” Of last year’s exhibition of “Redeem X,” Martensen-Larsen says the reaction was mixed, but overall more positive than that of “Curtainfall,” for which he earned many negative headlines. At least two members of the 17-member Council of Ethics, however, have deemed both works “immoral.”

Philosopher Arno Victor Nielsen, whose criticism was ruthless during the Copenhagen tour of the exhibition Body Worlds because it was “all about making money,” asserted that Martensen-Larsen’s display will be of great importance. “The end justifies the means,” he said. “Since it serves to prevent the death penalty, it’s acceptable.”

Legal issues are another matter. “Redeem X” (the ashes in the hourglass) was not quite as complicated as “The Unifier” may turn out to be. Danish lawyer Thorkild Høyer stated that, technically, the ashes of a cremated deceased are not the same as a corpse, and therefore probably do not fall under the Danish Penal Code of improper handling of corpses: ”Because it’s ashes, because the family gave their acceptance, and because it’s not an insult but a worthy act, I do not think that there is a criminal offense.” Martensen-Larsen says that he already has two exhibitions lined up for “The Unifier,” one in Texas and one in Washington, D.C., but because of the unresolved legal issues surrounding the “misuse of a human corpse,” the galleries wish to remain anonymous at this time.

Martensen-Larsen does not call himself an artist; he is a jurist (post-law school/pre-lawyer) in Copenhagen, which does not have the death penalty. Whether his work is art or not has been hotly debated. But, while he uses some strategies of conceptual artists, he chooses not to engage in an artistic discussion about his project. “It works as an abstraction,” he concedes, “but by making it concrete, people will have to think about it.”