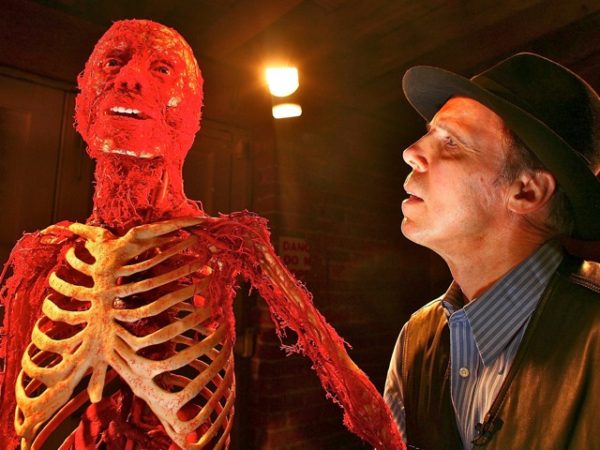 Gunther von Hagens and one of his creations.

If there’s any truth to the idea that the most significant art of the future is often unrecognized as important in its own time, then Gunther von Hagens’ “plastinated” corpses in Body Worlds RX, on view now at Houston’s Health Museum, could, sadly, turn out to be the greatest sculpture of the early 21st century.

The Body Worlds exhibitions are a series of aestheticized science freak shows in which real human corpses are skinned, dissected, mummified in plastic and posed as if still alive. Depending on the iteration you visit, you will see the bodies posed to play chess, hurl a javelin or just contemplate a coat of their own flayed skin. Their billing as educational is a necessary fallacy used in order to publicly display elegantly mutilated human beings. It really is an indictment of our culture that this seems perfectly natural and incredibly entertaining. And it is entertaining. The exhibition series is a juggernaut, attracting well over 30 million viewers across the world, and financing plastination studios in several countries including China, where, presumably, corpses are easy to come by. 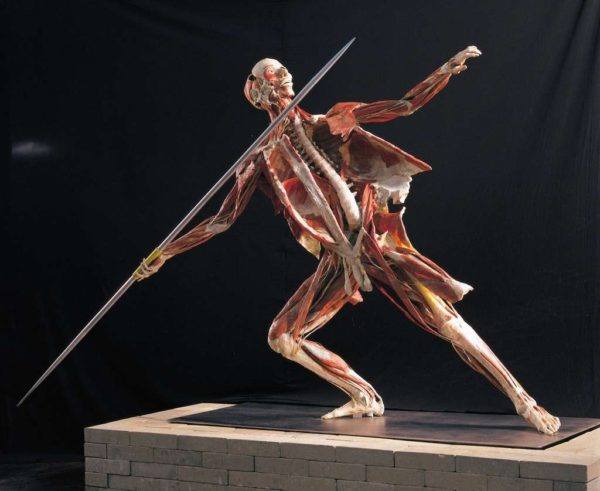 It’s not really possible to understand the Body Worlds phenomenon without understanding its genuinely bizarre creator. Gunther von Hagens (now unable to travel due to advanced Parkinson’s disease) has self-consciously styled himself as a kind of kitschy cross between Joseph Beuys and the evil preacher in Poltergeist. With his pale, gaunt face and ever-present fedora he embodies a comical vision of the Grim Reaper. Like Beuys, his work leans heavily on his medieval shaman persona.

Von Hagens was born in Poland in 1945. His parents eventually settled in East Germany, where he grew up. He was political and was imprisoned for two years in 1969 for attempting to defect. In the late 1970s, working as an anatomy professor at the University of Heidelberg, he invented his patented process of plastination, in which water is extracted from the tissue of human and animal corpses and replaced by plastic polymers. It’s mummification minus the crucial ingredient of a belief in an afterlife. Egyptians thought their mummies were going to get up at some point and leave the tomb. With von Hagens’ plastinated mummification, the body is the tomb. 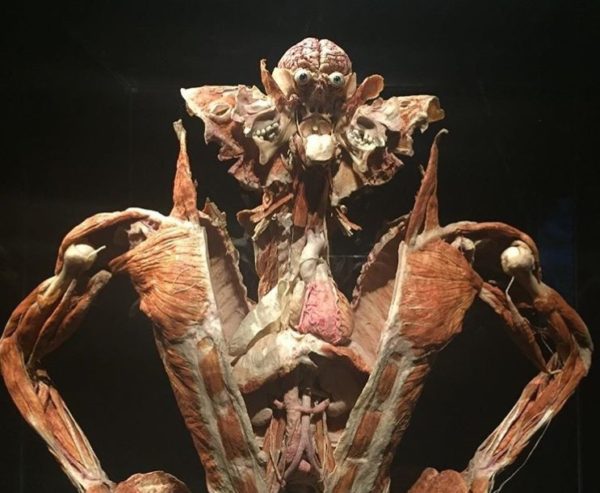 image via The Health Museum

Von Hagens holds an anti-establishment philosophy. In a “Late-Night Christmas Message,” a segment on the BBC’s Graham Norton Show, Von Hagens wandered through one of his exhibitions holding a single lit candle like a Dickensian ghost. His message is a populist one. As the flickering flame illuminates his gaunt face, his high-pitched voice, thick with a German accent, tells us that he shuns “posh” venues and brings his exhibitions “to the people” in places like slaughterhouses, breweries and open marketplaces. 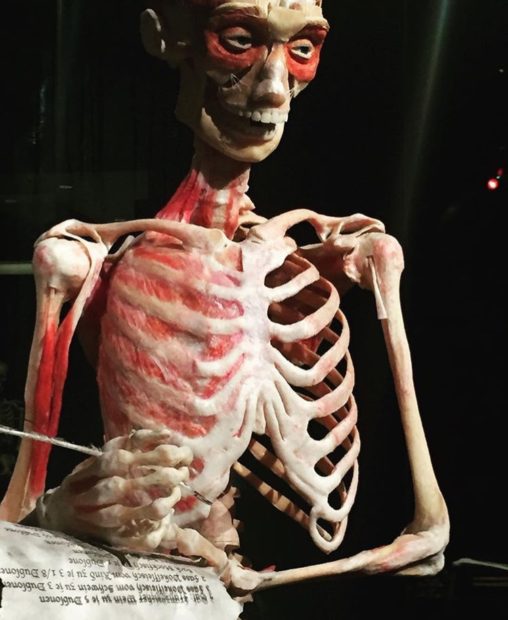 image via The Health Museum

He declares that medical science and the truth of the body are kept hidden in the hands of the expert elite and that his purpose is to bring the natural, scientific wonder of biology to the common man. Citing his life in East Germany, von Hagens says, “democracy is at its best when the people make a mockery of the predictions of the experts.” It’s a certain kind of rhetoric that falls apart when you blow on it (and has graduated from BBC late-night to Oval Office primetime). There’s value in recognizing the folly of experts who’ve lost their way and become priests and bureaucrats, but Body Worlds‘ critical and educational function is a distant second to its primary function as religious entertainment in the form of a house of horrors. 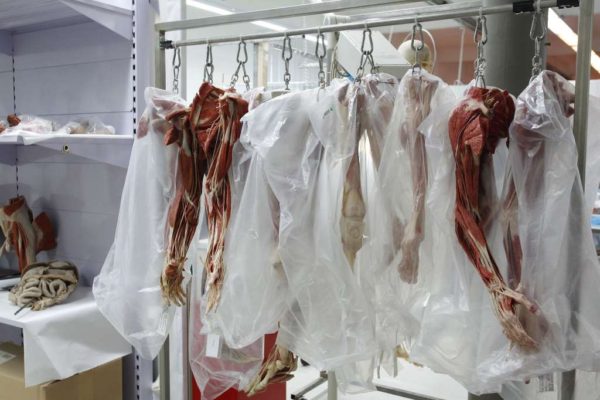 Who are these mummies, “frozen in time,” as von Hagens says, “between death and decay?” Well, they come from willing donors (though there have been some Dr. Frankenstein grave-robber accusations). Visitors to Body Worlds RX can volunteer to donate their own bodies in the service of von Hagens’ art. Because of their voluntary agreement to appear before us, von Hagens’ creatures persuade us that what we see before us is us. But it’s not. Not really. They’re von Hagens’ creations. They’re his monsters. The artificial dynamism of the poses, meant to imply life, only reinforces our awareness that these poor creatures are dead. We’re alive. Their purgatory between death and decay is exactly the place where I don’t want to spend an eternity. If you want to donate your body, the transplant chop-shop can always use parts for people who are still alive. 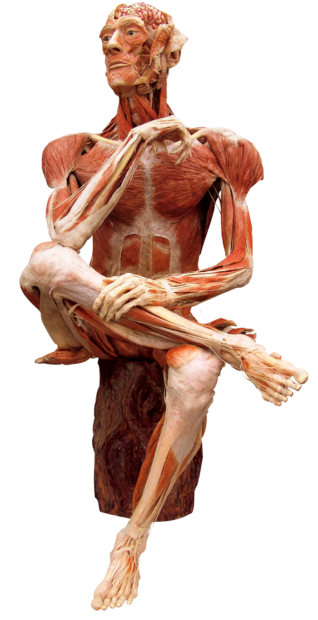 Like all real artists, von Hagens is a charlatan. But his magic is pretty strong. Thanks to sharp lighting and plenty of black paint and drapery, his spells are attractive and repulsive at once. They speak to our frightened intuition that this bag of meat and bones is the only home we’ll ever consciously inhabit. But they also show us what it looks like to be trapped, without consciousness, in our viscera forever. And isn’t that what so much of human society has become— a great swelling desire to live forever through the magic of technology? If cultures get the art they deserve (and they do) Gunther von Hagens may just be our Rodin.

Through April 23 at the Health Museum, Houston.

Danish Man to Exhibit the Gilded Body of...