350 Words: “In the Interest of Time” at Brazos Gallery 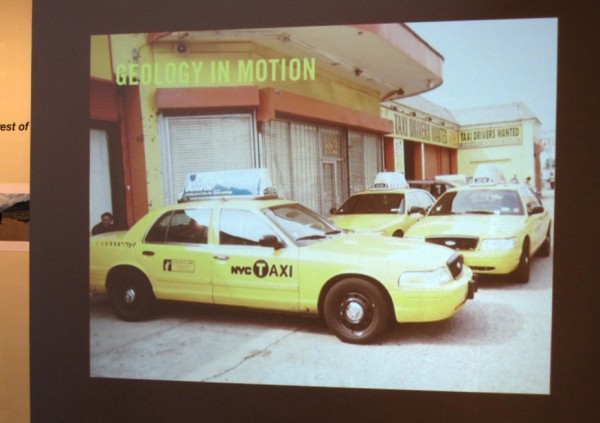 Smudge Studio, Geologic City: A Field Guide to the GeoArchitecture of New York (2010-2011)

The exhibition In the Interest of Time presents three projects by the Brooklyn collaborative Smudge Studio, comprised of artists Elizabeth Ellsworth and Jamie Kruse. Their primary subject is the landscape, and their approach includes embodying the roles of scientist, historian, anthropologist and, of course, artist. Their process is a performative journey, navigating, investigating and documenting phenomena within the landscape. In some ways, it is easier to describe what their work is not. It is not tourism; it is not activism; nor is it documentary photography/video. Rather, they are interested in using the aesthetic experience to project imagination and address deep time. So what does that look like? 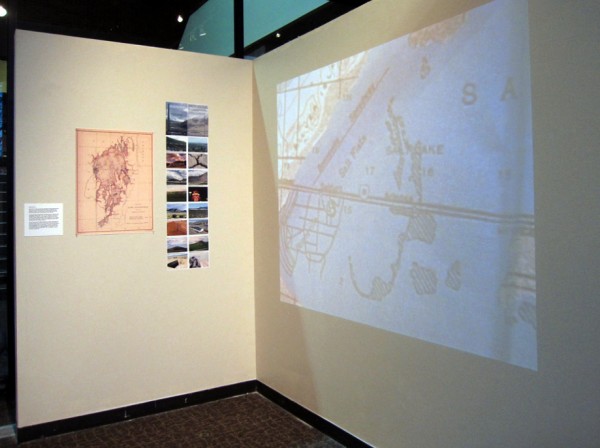 In their project Worlds to Come: a field guide (2009), the duo visited six sites of nuclear detonation in Nevada and New Mexico, photographically documenting their visits. The bleak landscape images show traces of human intervention, as well as scars from nuclear testing and detonation. The artists also produced a newsprint field guide, with information and directions for each site. Lest you think it’s all about doom and gloom, the artists subversively insert humor into the field guide. The guide’s center layout includes examples of graffiti, humorously entitled “Post-Land Art” at one of the Nevada nuclear test sites. In a conversation with the artists, they spoke about human scale vs. the larger forces of time, as well as detonations’ scale of impact—how it will continue to affect/shift/transform the land for millennia. 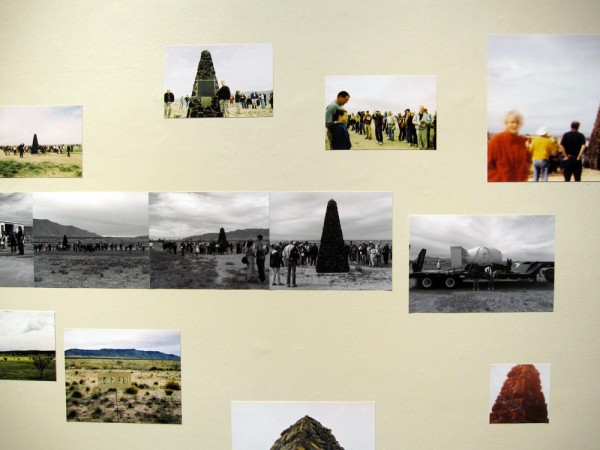 In their recent project/publication Geologic City: A Field Guide to the GeoArchitecture of New York (2010-2011), the artists shift from the Western landscape to the cityscape. Choosing 20 sites, the field guide playfully uses geologic language to present an alternative map of the city. When I asked the artists about their shift to the urban landscape, they spoke about the similarities in the projects. Both have toxic sites where photography is prohibited. (Of course like all artists who break the rules, they took photos anyway.) The New York field guide focuses on making the invisible visible by drawing connections between larger geologic forces. For example, the salt the city uses to melt snow is thousands of years old and hails from South America.

Using maps, photography and Super 8 film, Smudge Studio’s third project Below the Line (2010-2011) examines the intersections where human structures interact with the shoreline of the formerly underwater Lake Bonneville in Utah. The challenge in exhibiting complex conceptual work is that it requires a time commitment from the viewer. Not deep time, mind you, but certainly more than a cursory walkthrough. In our ADD society, many viewers will bail. But for those who invest, it’s worth it.

In the Interest of Time—Smudge Studio
Brazos Gallery at Richland College
Through March 2, 2012

[…] Colette Copeland – “In the Interest of Time” at Brazos Gallery, GLASSTIRE.com […]