Ex.11 is a poll, of sorts, about the present state of painting. Michael Mazurek, Director of Brazos Gallery in Richland College, began a dialogue with other artists about the matter, and the result is a very full show: twenty-two paintings by fourteen different painters. Although, I should qualify: some of the artists responded with work that presses the definition of painting; artwork that looks at the medium askance.

The total lack of poetry in the exhibition’s name is intended as an irony. Mazurek knows he is trying to corral several themes—themes that spin one way and dive into another. He chose the name Ex.11 for its scientific ring: a simple, categorical name to stand for a thick and diverse file. This show is held in conjunction with the Texas Biennial, and the name is also an interesting way to match the survey quality of that large-scale event.

There is not space enough here to discuss all the paintings in Ex.11. I chose to mention the more subversive answers to Mazurek’s poll. These paintings describe complicated thinking about the mind’s relationship with objects. They move us to think differently about whatever the eye meets. 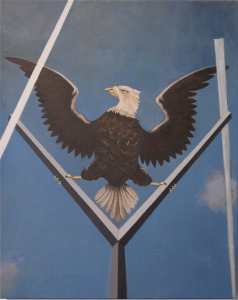 Emblem, by Vince Jones, is the very work that sparked Mazurek’s discussion with his colleagues. Immediately it raises a question about quality—is this a good painting? I think the naive or oddball style effectively communicates some complicated ideas about The Great Seal of the United States. The Great Seal is a sign that shines with associations of democracy, liberty, and so much else. Inheritance and innovation run through its core. Emblem, on the other hand, is oxymoronic, even Freudian in the sense that all beliefs and positions include their opposites or become their opposites. The perspective in Emblem is odd, very uncertain. Look at the strange platform on which the eagle stands. If the girders suggest paths of inheritance and innovation, then the two diverge sharply and come to abrupt ends. The eagle’s legs are spread, well, spread-eagle, and the sharp eye suggests not the leadership of George Washington but rather the stony, utter simplicity of Buster Keaton. Jones has turned the notion of the Great Seal into its opposite as a way to describe a changing and uncertain world. 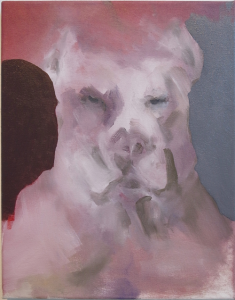 Ludwig Schwarz was moved to paint pit bulls after hearing about a gross indecency perpetrated on the breed by an owner who aimed the tremendous jaw power of the animal against its own kind for the sport of dog fighting. In this painting, Schwarz includes what is probably his own profile. The profile is minted dark against the light of the dog. There is a Gnostic air about the painting; a spirituality that favors the mind and distrusts the body. The human silhouette looks cut off at the neck. Without a body, the person’s ability to control the animal is gone. The dog’s body disappears into a large, cloud-like form. Its eyes project an easy authority. The calculating human mind is denied the light of this authority, presumably in a state of penance for having pushed beyond the familiar means of exploiting nature into a shameful realm of despoiling it. 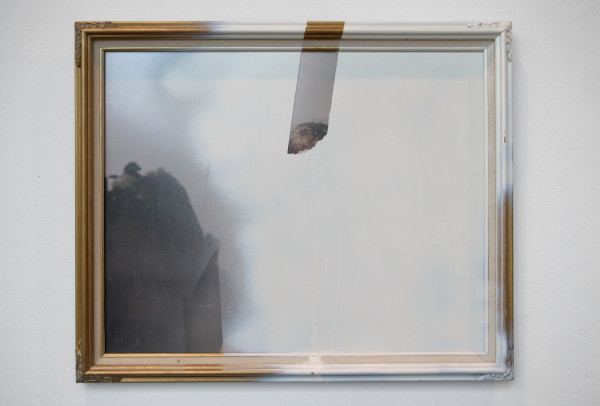 Jesse Morgan Barnett‘s Installation Detail is a framed color photograph mostly covered over with white spray paint. It was originally part of a larger installation for an exhibition titled Nest. The detail is a portrait of the artist’s late father, which hung in his late grandparent’s bedroom. Barnett says that Installation Detail isn’t about making a painting. It is about having paint on something. I find this to be a very interesting distinction when linked to the subject of a loved one’s death. Making a painting is an act of creation, putting forward an interpretation of the world. Painting over something is an act of prettying something up or redacting it.

According to a family’s traditions, portraits of the deceased are turned to the wall, burned, or enshrined somehow. Where there are no traditions, portraits get lost in boxes or digitized onto DVDs and generically labeled. Religious concepts of the Everlasting do not mean much to us in this secular age. Without a grand cosmological structure to react to or creatively resist, artists today are mostly mute on the subject of death.

The use of spray paint is suggestive. Despite the creative efforts of street artists, spray paint reads as defacement—a usurping of territorial authority. Barnett’s piece looks like a tantrum, a rage against death. Or perhaps it is just an expedient act of erasure, a way of moving on with life. I wish the artist were more open about his feelings. Not in the way Oprah is open, but open in the way Homer was. Death is something that was probably understood better in antiquity than it is today. Certainly their art on the subject of death is far more fascinating than our own. People in Homer’s time made immortals of their fathers and mothers. These immortals were not saints; terrible qualities were immortalized alongside benevolent ones. They lived stronger in the minds of the survivors than mere memories, for the dead were allowed to have dimensions. 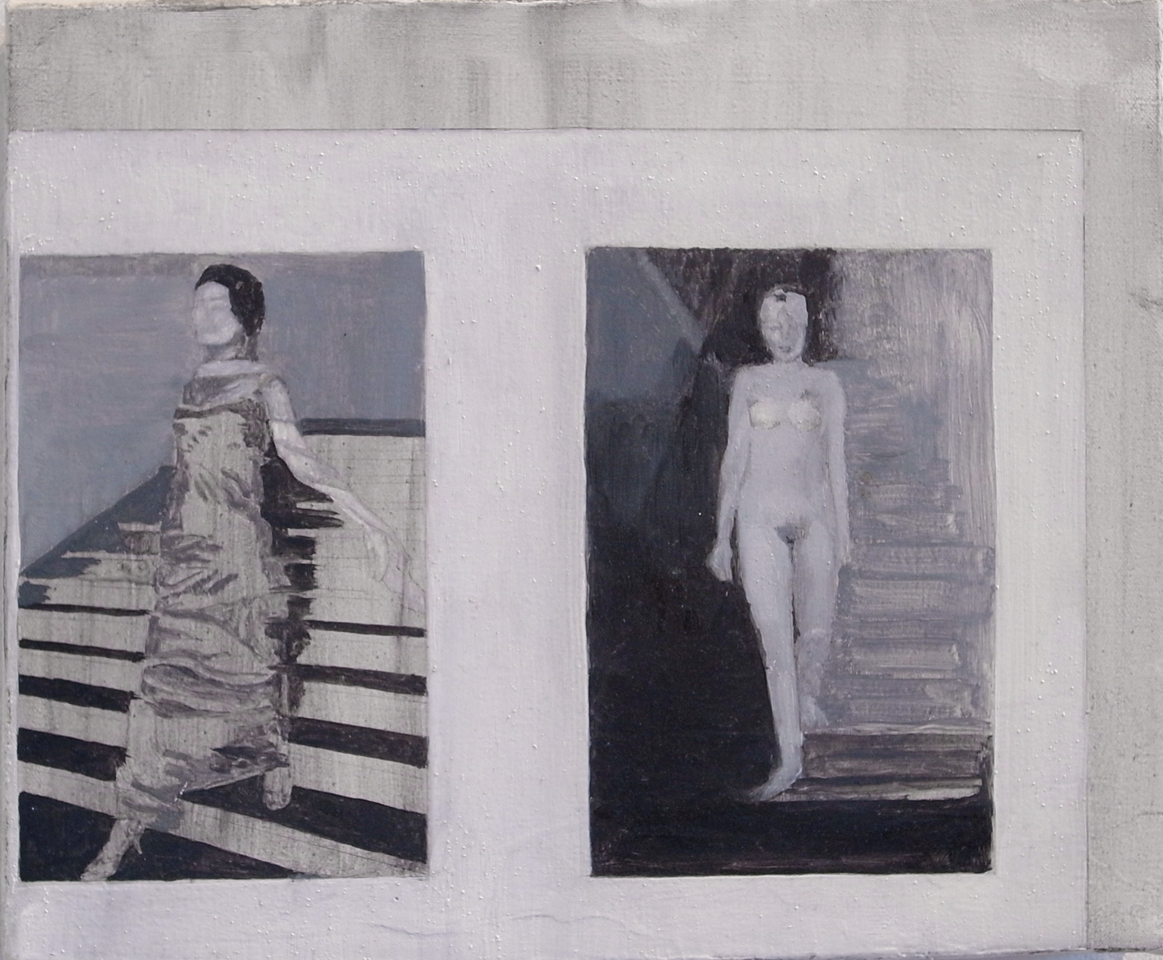 Richter Painting describes Lucy Kirkman‘s highly articulate thinking about the creative power of reproduction. This painting considers two Gerhard Richter paintings that were reproduced from photographs, Woman Descending the Staircase and Nude on a Staircase. Kirkman found the paintings reproduced in a book at the Dallas Museum of Art library. She photocopied the page with the Richter images and then painted a reproduction of that photocopy. Rather than degenerate, the women in these images keep their power throughout the process. One wears a glamorous gown; the other is beautifully pure. They are like two aspects of an archetypal image: a goddess descending into the plaza to deliver news to the people.

Another Kirkman painting, Book Painting with Tea Stain, shows a book page with very faint lines. These lines indicate columns of text, but the signs are scarcely visible—here and there, we find a letter. The text is an absent form of presence, and the painting is perhaps a consideration for the long stretches of nothingness, all the patience and searching required to align signs into a language that rings true. Book Painting with Tea Stain hangs near a Matthew Girson painting titled Heidegger’s Library. This is a dark painting in which we see only the form of shelves, a table, and many books. 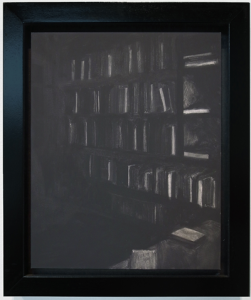 I wonder if Kirkman and Girson are considering, perhaps unconsciously, the present state of book publishing. It’s been said often enough that books will cease to be made on a mass scale, to be replaced by digital text. For my part, I look at a book as an ecology. It is not only the author’s content but the page, the typeface, the binding, the art on the cover—the object of it and the industry that employs people. If we stop producing books, we cease to generate an ecological system. Painters, too, face the reality their work will be seen mostly in digital form. The digital form does not address the ecology of the painting—the materials and the surface work. The viewer’s presence is required to appreciate the depth and variety of this fragile yet enduring system.

With Heidegger’s Library, Girson considers one aspect of Heidegger’s philosophy: the self-containment of a thing. If one comes upon a pool of water, one may hear the water, see it sparkle in the sun, smell its odor, and taste its wetness. But Heidegger says we never first perceive a group of sensations. Rather, the first thing we notice coming to a pool of water is the water—the self-contained thing. In Heidegger’s Library we don’t to see the light falling in the room or the titles of the books or the wood grain in the table. We see the library as the thing itself.

Animal fat is a striking ingredient, to be sure. But one doesn’t isolate the sensation of the fat pigments first. Nor do the coffee grounds or oil sticks register first. So, just what is the first thing a viewer notices? Is it the geometrical forms or is it the rather improvisational sense of play in which the artist treats these forms? Are we looking at a rational use of space or a totally creative one? Lapthisophon is aware of one of Heidegger’s key points­—that our interpretation forces itself on things. Animal fat is not a sign that points to a particular meaning of the painting. It is there as a surprise. This sort of surprise opens an avenue to a serious way of wondering about the objects in our lives. The ways in which we navigate around and negotiate with objects speaks to what we value in our environment, the stuff we care most about preserving.