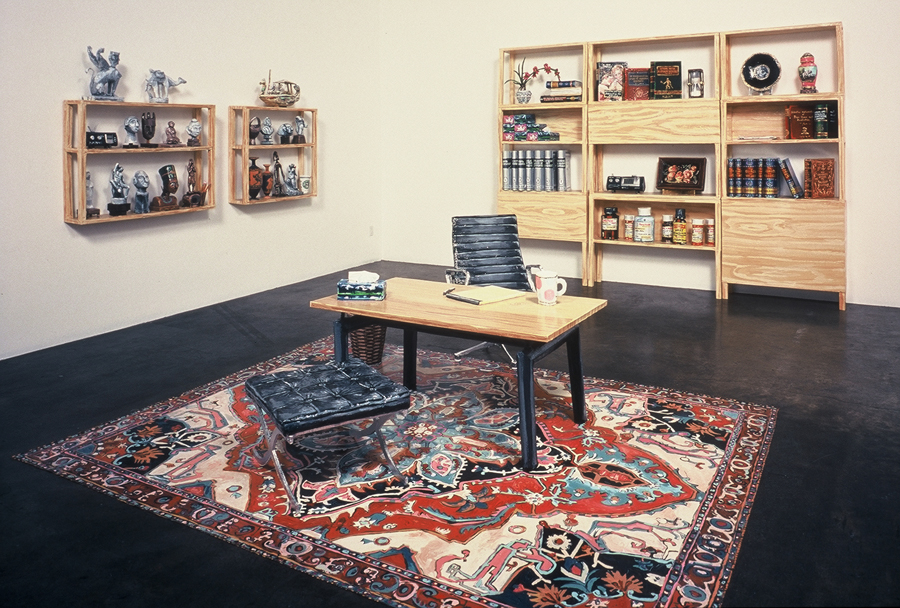 From Luminara attended by 300,000 to the Cammie Awards at Chrispark and the Seventh Annual Dignowity Hill Pushcart Derby, Contemporary Art Month is an eclectic celebration of new work by local, regional and national artists. And many of the main CAM exhibits will be up into May.

The McNay Art Museum’s chief curator Rene Paul Barilleaux focuses on Texas and national artists who use ordinary materials to replicate everyday objects in “New Image Sculpture” continuing through May 8. California artist Jean Lowe skewers Mad Men-era pretensions with her detailed and hilarious recreation of a stereotypical psychiatrist’s office from the 1960s, complete with faux mid-century modern furniture, such as classic chairs by architect Marcel Breuer, along with a patterned Oriental rug, framed certificates and diplomas, yellow tablets filled with scrawled notes and flimsy shelves stocked with ironic tomes such as “Misanthropes Make Bitter Lovers.” 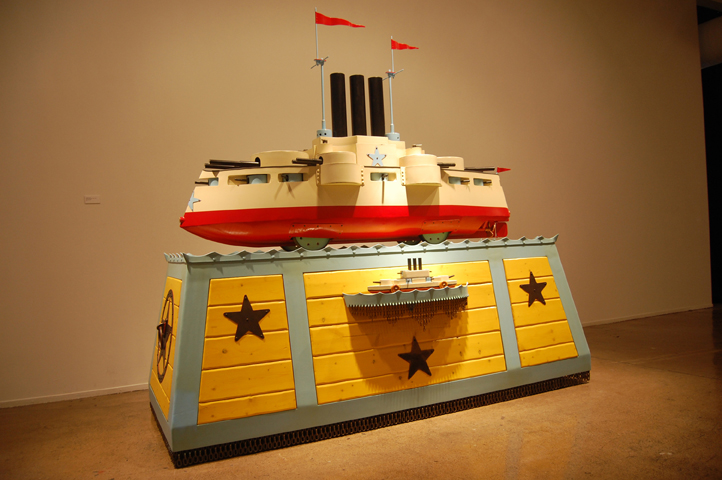 Gregory Elliott, chair of UTSA’s art department, takes center ring at the Blue Star Contemporary Art Center with “Dam the Torpedoes” through May 14. Eliott’s toys and machines have a good kind of circusy quality, featuring bright prime colors and magically childlike forms, but social commentary is a constant, especially the family of primitive-looking atom bombs. Working with wood, steel, leather and other materials, Elliott says his carefully crafted constructions take from six months to two years to complete. Prior to joining UTSA in 2008, Elliott headed the art department at UT-El Paso. 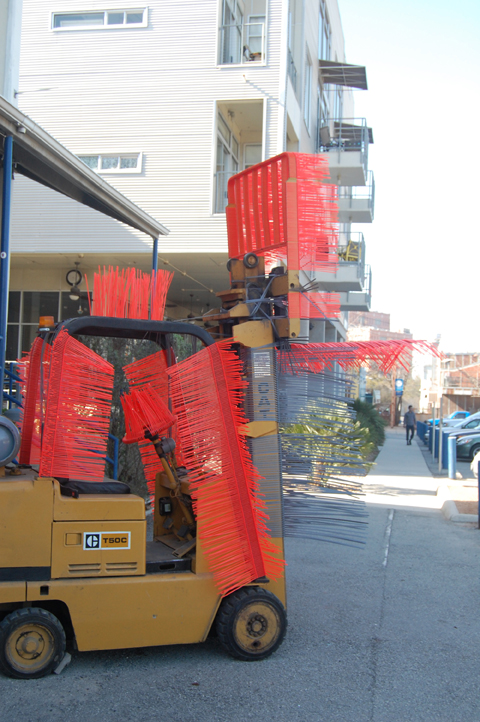 Brian Jobe, born in Houston and a 2004 MFA UTSA grad, returns from Knoxville, where he teaches, for “Blanks Tides” through May 14. He’s carried on altering found objects such as a sled, shovel, umbrella, carts and other everyday tools by attaching zip ties to them, generally pulling the ties tight in waving rows of plastic filaments that add a whimsical touch to the drolly mundane. In his artist’s statement, Jobe says he aims to create an environment where “repetition can serve as a gesture of the infinite.” 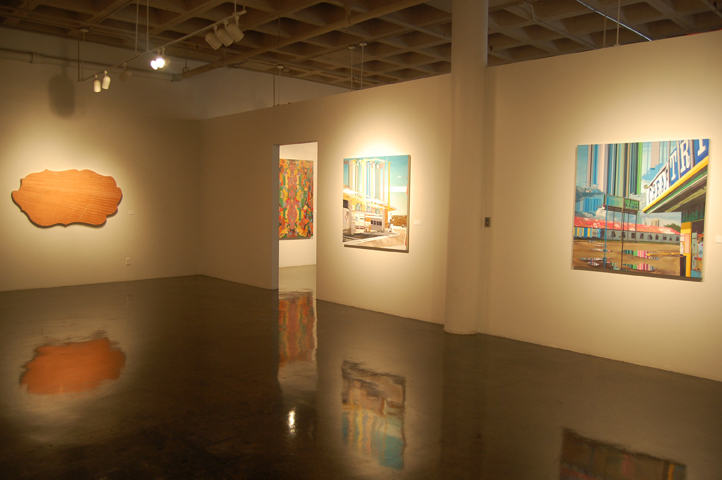 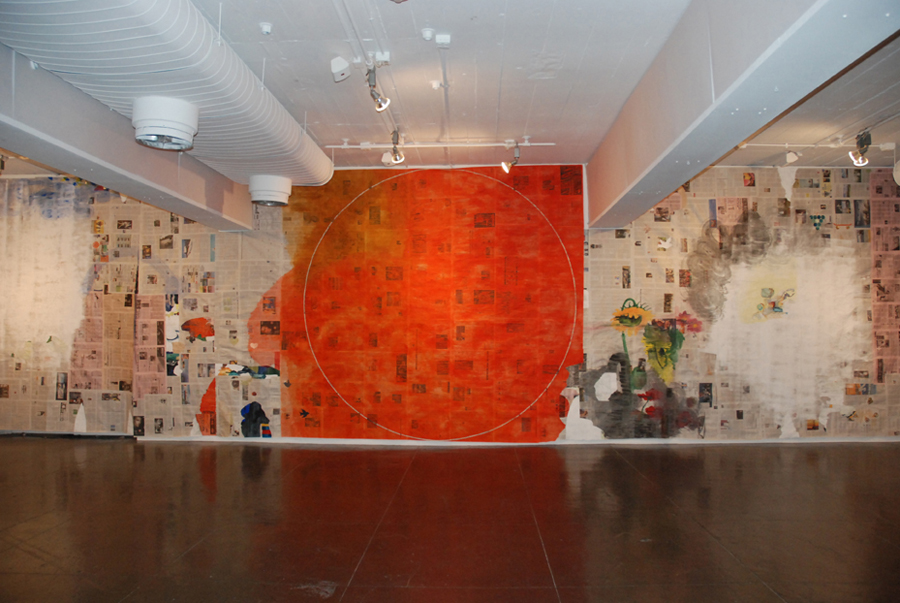 German artist Gabriel Vormstein covered the walls of Artpace’s Hudson (Show)Room with newspapers, which he used as a 360 degree mural-size canvas in his first American museum project, “The Teeth of the Wind and the Sea,” through May 1. His figures are derived from Egon Schiele and large geometric forms are inspired by Francis Picabia in his rambling, free-form composition that also features flowers, landscapes and humorous moments such as flying birds on one wall carefully watched by a black cat on another. A set of footprints divides into two single-foot trails that suggest a division of the self, perhaps between fantasy and reality, whose boundaries Vormstein hopes to obliterate in his all-encompassing installation.

Texas artist Joshua Bienko used the soles of five-inch Christian Louboutin pumps for canvases as part of his “Window Works 11.1” installation. On the bottom of the designer shoes, which are being rotated through, are photorealistic oil paintings of images by Andy Warhol and Jeff Koons – artists who understand how to exploit brand-name lust. 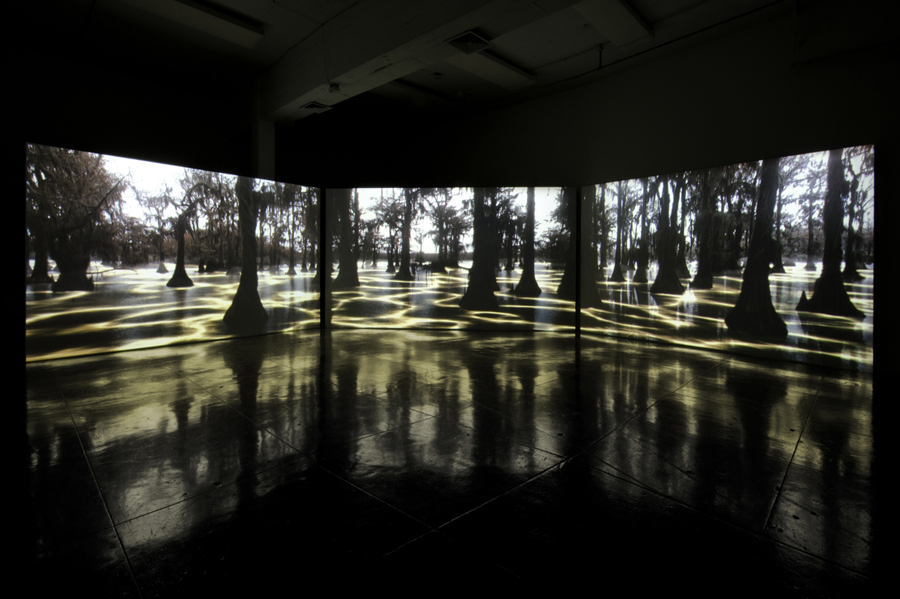 New at Artpace are the “11.1” artist residency projects curated by Heather Pesanti of the Albright-Knox Art Gallery. Kelly Richardson (Newcastle, England and Toronto) created a large three-screen video installation featuring a haunting image of Caddo Lake with cypress tress draped in Spanish moss and a strange luminescence flickering through the water. E.V. Day of New York created a giant “CatFight,” the skeletons of battling saber tooth tigers suspended from the ceiling. And Devon Dikeou of Austin discovered jazz greats on the brass name plates for rooms in a Buenos Aires hotel, which she turned into a quirkily charming installation with the help of her friend, octogenarian alto saxophonist Sonny Simmons. 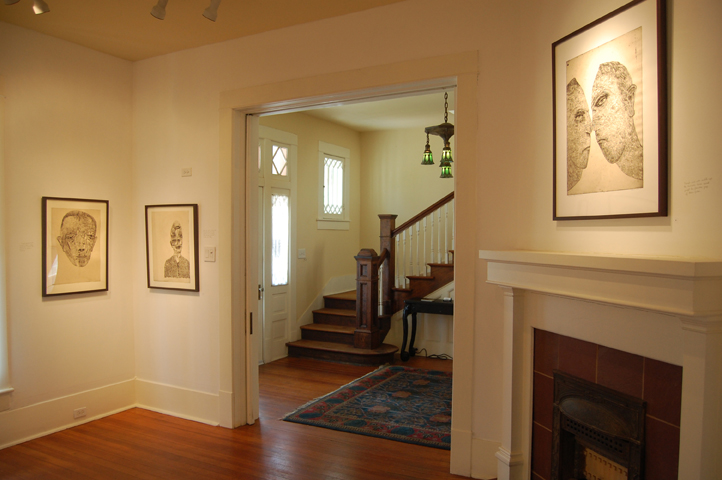 Dennis Olsen evokes the caricatures of Honore Daumier and Francisco Goya with his “Fictive Portraits” through May 6 at the REM Gallery, housed in a handsomely renovated Victorian mansion near San Antonio College. The UTSA prof is also president of the Santa Reparata International School of Art near Florence, Italy, and his previous work suggested ancient Italian ruins covered with modern graffiti, so these portraits of imaginary characters are a departure. Though he says the origin of these figures is a mystery, he provides brief lines of narrative that suggest their fates. 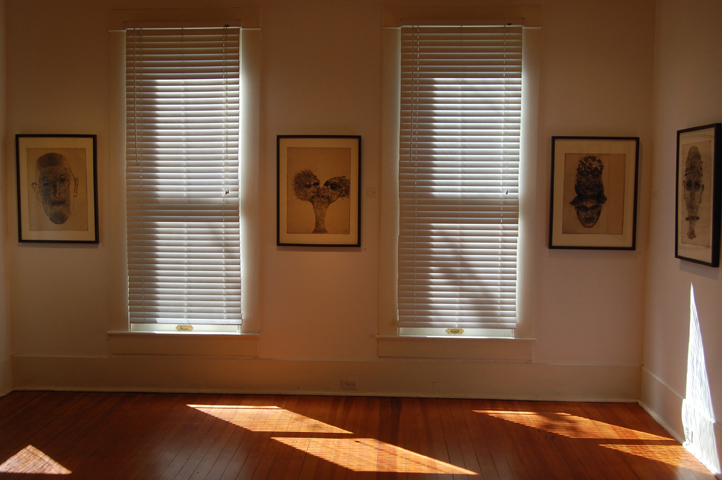