About a half a block from where I live is a family of Christian Republicans, whose patriarch walks across the street every morning, and steals the newspaper off his neighbor’s lawn.   In the Christian Republican family’s yard is a sign suggesting we elect a certain Republican to Congress; more recently they have added a cross, that says “He is Risen,” in honor of the death of Our Lord.  I want the sign to say “He has Risen”, but since it doesn’t, I add the phrase “Like A Loaf of Bread” to it, and sing a little song that combines the two every time I walk past their house.The Death of Our Lord, along with the death of two of my relatives within the past year, has made me curious to visit the National Museum of Funeral History, which is located just off Ella near Airtex Boulevard, north of Downtown via 45.  There are only a few cities across the nation that have Funeral Museums, and Houston is fortunate to be one of them. 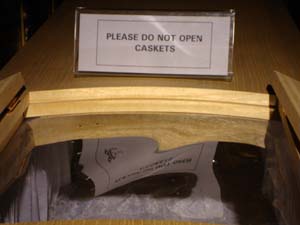 The building that the Museum is housed in, is big, cold, ugly, and uninviting, like the child of a modern funeral home on steroids bred with a post WWII Soviet Block Gulag dorm.  When I arrived at the establishment this past Friday, I was presented with a perfect photo op, one which filled me with delight.   Under the sign for the National Museum of Funeral History was parked a beater of a car belonging to a newly wed couple.  Its windows were painted in whipped crème, and on its rear window was the expreession, “New Wife, New Life. ”    As I said, a perfect photo op, and is so often the case, runined by a dead battery.  D.O.A. at the Funeral Museum.

Before I venture inside, I would like to know this – who on earth takes his new wife – and I am presuming the two were on their honeymoon (and/or Truman Peyote fans) – to a funeral museum?   What sort of person is this?  Perhaps the sort of person who has taken all his wives to such places, prior to hugging each and every one of them a little too tightly. That is who. 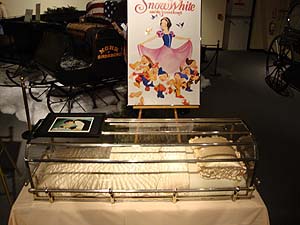 When you first walk into NMFH,  you are obligated to enter a gift shop, filled with the kind of chotskies you feel you can’t live without, that is until you see them in the light of day – pairs of socks silk screened with phalanges and metatarsals; koozies and t-shirts emblazoned with phrases such as “I’d rather be dead” and “My grandparents went to the funeral museum, and all they brought back was this lousy Civil War coffin”; a pair of skeletal figurines resembling Elvis and some unidentifiable woman.  A sentry sits guard near the entrance turnstile in the event someone actually does try to steal a casket; the first time I visited I mistook him for a display, as he never once moved or blinked an eye.

To enter the Funeral Museum proper, one purchases a $10 token from the gift shop attendant, and then drops it (the token, not the attendant) into a turnstile slot.  I have to say I was a bit disappoiinted that said token was not a pair of coins placed over the eyes, and that I wasn’t ferried into the place by a guy named Charon.  Nonetheless, if it’s an escort you are looking for, there are plenty of vintage hearses that at one time would have eagerly taken you on that final ride.   My favorites, among the many, were: 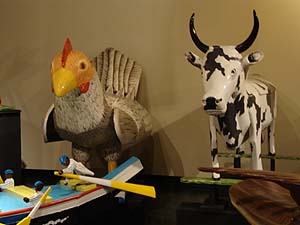 In addition to hearses, NMFH has lots and lots of coffins on display.  Civil war era coffins, coffins made of copper and wicker, a coffin for three (with a sign that says “This Side Up”), twelve wonderful coffins by the late Ghanaian craftsman artist Kane Quaye, including a longhorn, a crab, a rooster, a leopard, and a Yamaha Outboard Motor; a Snow White glass encased casket (the perfect size for that special little girl); and an exact replica of the coffin that Lincoln was buried in (complete with a wax corpse of the man.)Displays in the museum are grouped, by themes, included a section on Civil War funerary practices ( i.e. a casket factory, an embalming tent), an international section (Look out, in particular, for the Help Me Help Me skeleton with its Goo Goo Fly Eyes), funeral home advertisements,  the majority of which are weather thermometers, and a hallway dedicated to Mourning in Victorian Times.   The display of Victorian mourning jewelry (rings, bracelets, watchbands) made from the hair of deceased loved ones, made me especially sad,  not because I wished I had clipped some of my Aunt Lola’s hair right before we laid her to rest (although I wish I had), but because as a twelfth generation American of white, Protestant descent, there are few rituals, funeary or otherwise, that my family observes. And not observing rituals leads to a kind of death, viz. that of your soul. 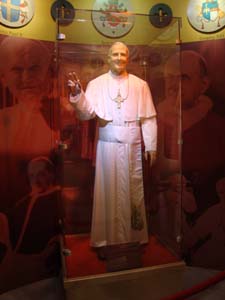 The largest and most over the top section in the Museum is dedicated to “Celebrating The Lives and Deaths of the Popes”. (Compare it to in size and scope of that devoted to The Presidents.) As you enter this gigantic exhibit, a voice over assures you that this display has the approval of the Papacy in Rome.  I’m no expert, but my thinking is, say wiith all the Vatican scandals (The Gay Prostitution Ring, The Pedophilia Cover ups, the fact that thousands of children have been sexually abused) maybe, just maybe the exhibit might should oughta only celebrate the death side of the equation.  That way, everybody will be happy, devoted and disenchanted alike.Within the entryway of the Popes is a painting of the Madonna and Child (La Virgen y El Nino) made by an artist whose name, according to my notes, looks like Scratch Scratch Scribbledy Scratch, only in Spanish.  The Baby Jesus in said painting has a head very much like that of King Akhenaten, with a cranium that can only be described  as  “Freakishly Large”.  Personally I think this painting is a key element in the so-called Priory of Sion conspiracy.  When I tried to photography it, (once I resurrected by camera) I found it impossible to take a decent picture of Christ.  Mary, mere human, came out fine, completely in focus, while His Holy Cassava Head each and everytime resembled a super close up of Akhenaten’s revered noonday sun.

I hate to say this, but the many, many chambers and rooms dedicated to the Popes were mind numbingly boring — partially because I don’t give a fig what happens when the Pope dies, and partially because the dioramic displays. along with their accompanying wax figures of popes, clerics, Swiss Guards, Papal Gentlemen, and Sediari Pontificis, were made too well for my liking.  I prefer these sort of things to be amateurish and off kilter.  Lucky for me, the Funeral Museum has something for everyone’s taste including mine. 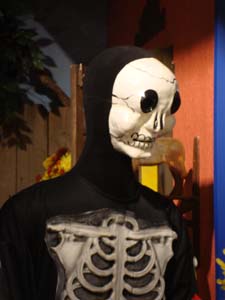 Take for example a section I like to call The Lamest Egyptian Exhibit in the Entire World or as it is really called, The Funeral Directors of Egypt.  I would bet good money that ninety five percent of the objects exhibited in this display came from the Metropolitan Museum giftshop in New York.  Peeking into what I supposed was the Pyramid’s Inner Chamber where the king’s sarcophagus resides,  I only observed the following: four cinderblocks and a badly painted paper bagish Head of Anubis laying on the floor.

In the Civil War section of the museum, the diorama Thomas Holmes and History of Embalming also happily contained sublime elements of inadequacy.  The mannequins standing in for Dr. Holmes, the father of modern embalming, and for the Civil War Soldier he is in the process of embalming, are sporting some of the most ill fitting and poorly made toupees and beards this side of “The Lifestyle“.  As I gazed upon the exhibit, I expected any minute to hear chobankagonkagong, accompanied by the expression “Hey baby can I pump my fluid into your deceased, if you know what I mean.”Really, Dr. Holmes! Why, of course you can!