Emerging and Submerging: The Push and Pull of Visibility in Alia Ali’s “Blue Note” 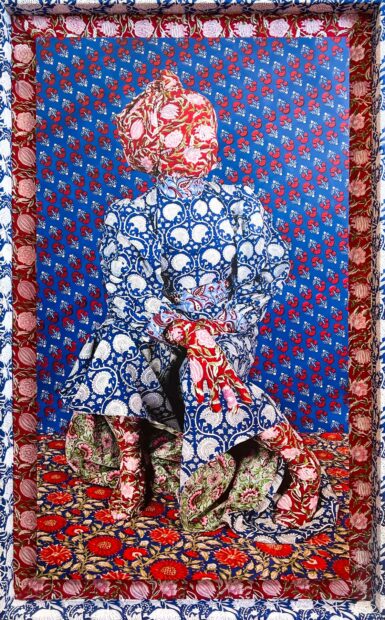 I didn’t go looking for Alia Ali’s Blue Note. I encountered the exhibition at Foto Relevance on a night out in Houston, hijacking my date away from our dinner as I followed the music towards the block of galleries along Montrose Blvd.  We passed a live band, a snaking drinks line, and throngs dressed to the nines packed into three distinct gallery spaces. Despite these distractions, Alia Ali’s photographs caught my eye. The figures in the images, wrapped in vibrant textiles, simultaneously draw the viewer in and retreat into their own landscapes of pattern. Their striking gestures are both of and apart from their fabric backgrounds. Though their faces — and for that matter, their entire bodies — are completely covered, the crisp gesture of a hand on a hip or a forearm pressing a knee to a chest speaks volumes and carries a persona. There is something determined about Ali’s life-sized subjects, both anonymous and deeply pronounced in their poses, willfully seen and obscured at the same time. In their portraits they seem resolute in their illegibility, their bodies dead set on being articulated, yet refusing to be translated, maintaining a sovereignty that supersedes language.

A child of linguists born in Yemen who has lived across seven countries and speaks five languages, Ali is no stranger to the question of what is translatable. In her Blue Note catalog essay, Ali describes pattern as its own language, as telling a story. She equates pattern and texture to cartography, and textiles as a “living archive of the communities they have touched.” In creating on Blue Note (the exhibition is comprised of several distinct photographic series), Ali traveled the globe working with master artisans to learn traditional techniques such as hand-printing Rajasthani cotton, and dying and looming Uzbek and Baghmal silk velvet. These exchanges yielded not only cultural understanding, but a new mode of decolonial artmaking through materiality. Ali’s essay speaks to the process of self-discovery that textiles and garments make possible. To Ali, they have the power to evoke, “the liberating feeling of actively reimagining one’s image by defining factors of how the fabric falls, how it pleats, how it fits together.” Ali elaborates by speaking to the collective process of (self) meaning-making through textiles, writing that the master artisans she worked with, “[a]llowed me to root my identity in and alongside their own.” 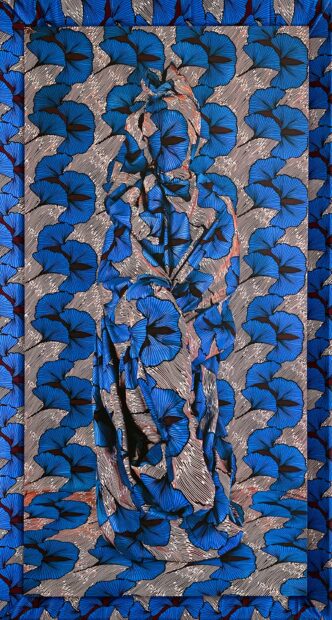 Ali’s Liberty series is a striking combination of texture and color. In the piece Blue Tides a figure clad in an azure and cornflower yellow dress stands behind a sky blue printed background. They pivot towards the viewer, hand on their hip. The effect of pattern on top of pattern is dizzying, almost like an optical illusion. Even obscured by sunglasses wrapped in fabric, and yellow lemons and olive green print covering their face, the subject holds a playful, confident gaze. In contrast, the visual impact of the piece Super Bloom has an almost Baroque sweeping quality to it. The subject looms above the viewer, their burnt orange and indigo skirt sweeping out of the frame. They are foregrounded by tart red wood-blocked flower patterns. Ali’s Blue Note photographs are animated by materiality. Having designed and curated the exhibition herself, Ali activates the space by framing her photographs in bright upholstery, which is often the same fabric draped over her subjects in their portraits. The result is a photograph that feels as much as an art object as an experience.

The same week as my encounter with Ali’s work, I find myself at the opening of FotoFest, staring at a collection of Chicanx photographer Laura Aguilar’s 1990s Nature Self Portraits, an artist who I have had a reverent, if not obsessive, relationship to for years. In the photographs, Aguilar’s body blends into yet also outlines the sparse foliage and dry rock of her surroundings. I think of Ali’s Liberty series again here, and the way that subjects in both Ali’s and Aguilar’s works stand distinct from yet profoundly originating in their own environments. 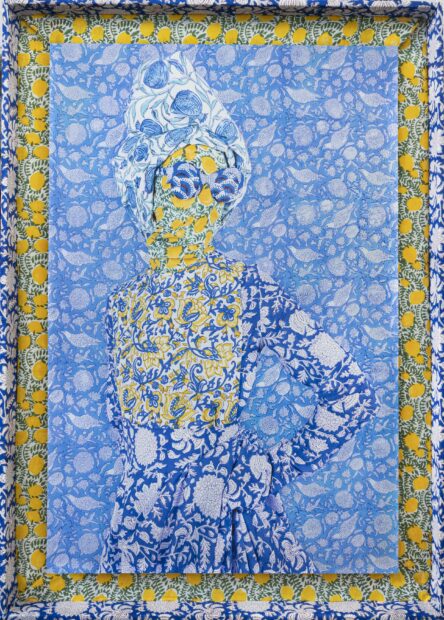 In both series, there is a linguistic framing that pushes up against colonial frameworks. Aguilar named her series Nature, decidedly placing herself, a queer, fat, disabled Chicana whose family lived in the region for generations, in the center of what is “natural” in a place that has historically erased her existence. In a similar manner, Ali titles the core series in Blue Note as Liberty, evoking the prestige and violence of British Liberty cotton only to undermine it. In her essay, Ali speaks to her master teachers again, the arbiters of a different kind of liberty. “You’ve taught me that Liberty cannot be owned,” she writes, “trademarked, or captioned, but must be experienced.” 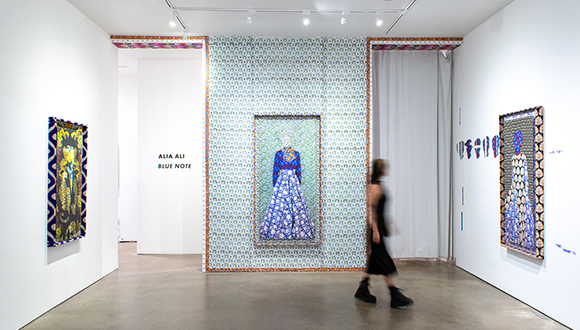 This interrogation of liberty extends into other series on display in Blue Note. While Liberty figures traditionally feminine forms, the subjects in the WARP series are decidedly genderless. In Fanning, the figure dwells inside of a striped cyan and lime green fabric sourced from the Ivory Coast, neat as binary code, reminiscent of an online aesthetic. The subject sits calmly in the swells and valleys of the material, evoking a sense of self-acceptance.

Alia Ali’s Blue Note evokes an alluring interrogation of power and of community-making through textiles. The exhibition’s visual impact and political weight burn in the retina well after one has left the gallery space. Ali’s sensory understanding of education, which she credits to her childhood in Yemen, makes for an artistic sensibility that bleeds from the frame, fills the white space, and demands a response beyond language.

Blue Note was on view at Foto Relevance in Houston through November 12, 2022