Art spaces in Austin, Texas have come together to form the East Austin Arts District, a collection of area galleries that work together to support each other. The group announced its formation last month with a Thursday night art walk. 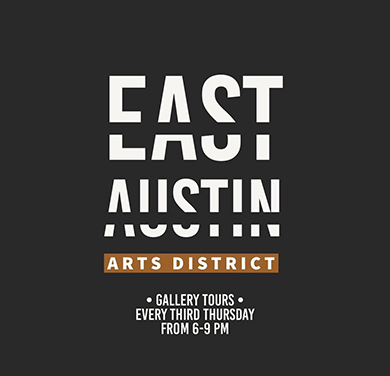 Jill Schroeder of grayDUCK Gallery told Glasstire that the East Austin Arts District is an informal collection of galleries rather than an official nonprofit or organization. While other cities have these types of coalitions of galleries, many of them have been more structured throughout the years. The nonprofit organization Contemporary Art Dealers of Dallas (CADD) was established in 2007 and supports the local art scene through programming and grants. Since 1978, the Fort Worth Art Dealers Association (FWADA) has promoted galleries across the city through its two annual events, Fall and Spring Gallery Night. The Houston Art Gallery Association (HAGA) was formed in 2018, just a few years after the Houston Art Dealers Association (HADA) disbanded.

Ms. Schroeder explained that Kevin Ivester of Ivester Contemporary first rallied local gallerists to discuss how they might organize and support each other. The idea of hosting a monthly gallery night arose from those conversations. Starting in October, the group began hosting gallery tours on the third Thursday of the month, during which the spaces stayed open late for visitors.