It Starts From the Edge and Moves In: Christopher Cascio’s “Ascent”

by Barbara Purcell May 23, 2022
FacebookTwitterEmail 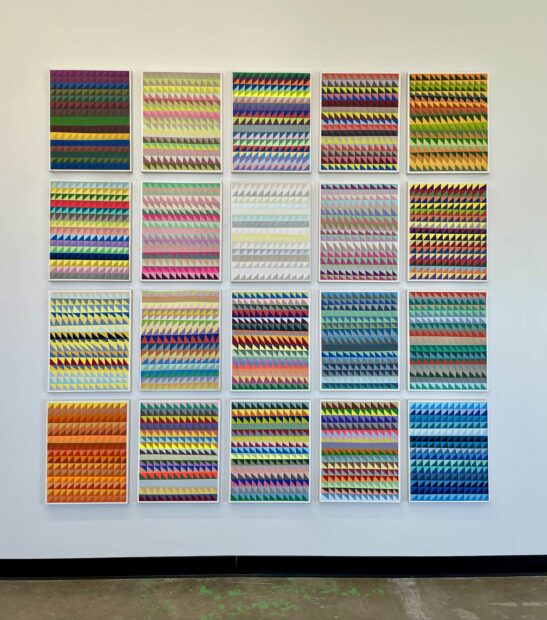 How do you put positive energy into a painting so it will radiate back out? Start from the edge and move in. This is according to Houston-based artist Christopher Cascio, whose current show at Ivester Contemporary in Austin proves just that. In Ascent, 35 paintings mystify the eye with their dizzying color compulsion. Cascio creates hard-edge geometric abstractions with the soft suppleness of a quilt; not surprising given his fascination with quilts. By applying spray paint to canvas — cloisonéed by masking tape in the process — bands of color emerge in ways that appear intuitive. Or unplanned. Or both.

Ascent’s two motifs — sawtooth waves and portals — overlap in vivacity but maintain their own energies: the sawtooth works tug along a jagged sea of tranquility while the portal paintings lead you through and up. Untitled (except for their parenthetical titles), each variation takes the viewer on a shamanic shortcut to the Benjamin Moore paint store of the psyche. Chris and I recently spoke about his current show, and about the power of color combinations, the magic of quilting patterns, and why pushing things a bit might rock the boat a lot.

Barbara Purcell (BP): I read that you view these paintings as “a devotional exercise to mental self care.” Can you elaborate?

Christopher Cascio (CC): It all kind of centers around themes of obsession, compulsion, and ritual practice. The work used to be a lot more about things — drugs, concert wristbands — any kind of actual obsession or compulsion I felt I had some kind of connection to. I would make really image-dense collages, to talk about personal stuff and the world at large. But this work is more spiritual now; it’s really just about feeling the painting and having the painting create feelings in other people. When I talk about it, I hear myself sounding very New Age-y.

BP: Can you share what caused this “spiritual” shift in your work?

CC: It happened in 2015. I found out I was going to be a dad, and three weeks later, I found out I had a cancer that was misdiagnosed 15 years before. Becoming a dad, this brush with mortality, and then having surgery where they reconstructed my chest with my leg muscle — I couldn’t walk up the staircase to my studio — it all kinda changed the way I work. I quit drinking and started making the abstract works, which were based on these quilting patterns I’d been doing with wristbands. I was becoming free from that very didactic, information-heavy work.

Then the pandemic hit: I was already in a depressive tailspin, and I had a breakdown. The doctor convinced me that I should stop smoking cannabis, which was really my last vice. I had gone through opiates, gone through drinking, and I figured this was harm reduction. I thought it was helping, but he said it was making my cognitive distortions worse. I was ready to be done with it anyway. Things have gotten easier since then; the work was already pretty spiritual, but then I was able to go full tilt. Certain work had been very detail-oriented and monotonous; it would take hours to paint these little things that I didn’t really have the patience for anymore. My motivations are totally different now, more immediate. I’ve gotten back to painting and the application of color and the interaction of colors. It’s become my main source of dopamine [laughs]. 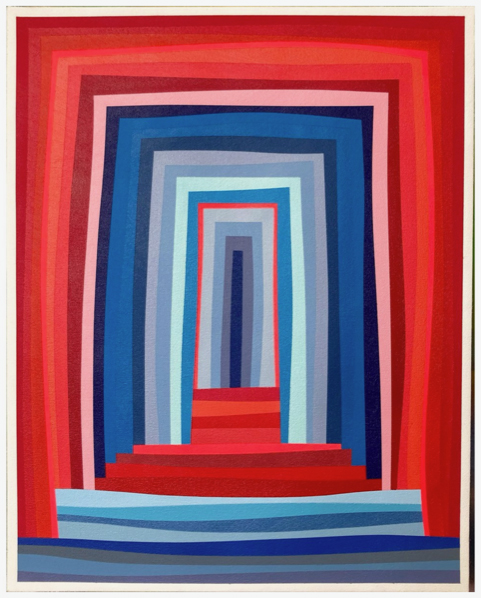 BP: Why did you choose Ascent for the show’s title?

CC: I knew I wanted it to represent going through and upward … it sounds kinda cheesy, but it’s me coming out of this fog and saying, “come along with me.” The paintings have gone from these representative portals that are still kind of quilty to actually being more like portals. The steps are now actually staircases; they’re three-dimensionalized into space instead of being implied, and it’s even more representational architecturally. With the bigger paintings, you can actually stand in front of them and feel like it’s a human-sized doorway. It’s more visceral than the smaller ones, which are more like a window into a portal as opposed to a portal itself.

BP: Most of your hard-edge paintings in the show are wobbly by nature. It’s unusual and kinda mesmerizing: how did you come up with this?

CC: The point of inspiration came in 2006: I saw a Gee’s Bend quilt show and bought the catalog and it kinda changed my life. But I didn’t really start applying it to my own art until I got into graduate school, and didn’t start making geometric abstractions until 2016/17 — but I always wanted them to have the handmade “everything in its right place, but not everything measured” look. I hardly ever use a ruler and try to keep it like that; I want the edge sharp but I don’t want it to be right angles — just close enough. I would emphasize the curves a little more as I went, and at some point I started to get a little freer with the wonkiness.

BP: Your materials consist of masking tape and acrylic spray paint: what happens from there?

CC: It generally starts from the outer edge and moves in. I tape off the shape of the outer band, paint the band, then cover it with tape and work on the next one so it keeps getting closer and closer to the center. Usually a third of the way in I pull off the tape to see where I’m at. I used to have it be more of a surprise, but those paintings could look pretty ugly. If you’re doing something large, you don’t want to leave that much material and time up to chance. By the time you get to the center — when you’re working on three or four at once — you might forget what’s on the outer edge. Sometimes a band of color just won’t work; you think it will look different than the one next to it, but when you look at it, they look the same. At times I pull the paint cans out in advance. Other times I’m just seeing how I feel as I go. I also have an app that clicks on parts of the image to create a palette. 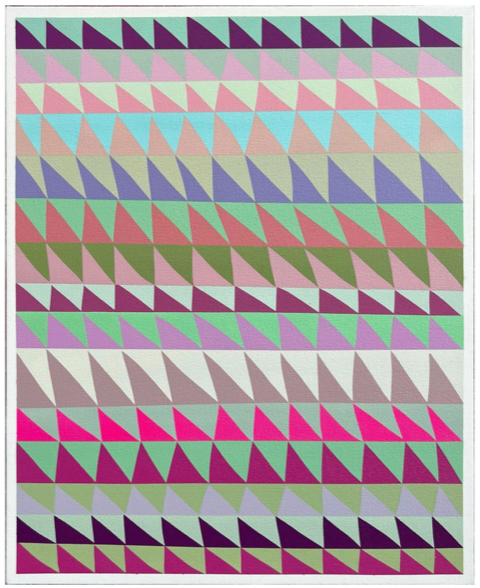 BP: Your color combinations, at times, are wildly disagreeable. I’m thinking of the portal painting with the neon yellow and orange steps paired with earthy blues. Did you plan for that?

CC: I probably had a basic color palette for those blues, and then it just started with one or the other. Hard to remember. But I do have a little sketchbook of colors, to keep track of paints in case I need to do touch-ups, or if I like the colors from another painting and want to pair them with a set of colors elsewhere. Sometimes the colors have only subtle differences but when you start messing with the interactions, the subtleties become more major than you’d think. There’s this really fine balance: you can push things a bit, but rock the boat a lot. I surprised myself with some of the colors in the Ivester show; I generally don’t use a lot of purple but everything has purple in it — I think that started when I went to see Milton Avery at the Fort Worth Modern. I’m pretty sensitive to color at this point, even the magical qualities of color. Like I said, it’s kind of out there — like astrology, but for color. I definitely feel power from colors and their different combinations … but then I start to sound like a nut.

BP: Just curious — do you meditate?

CC: I absolutely do not. The meditation is the working. It’s very, very hard to quiet my mind unless it has a path to go down. Art is the path. 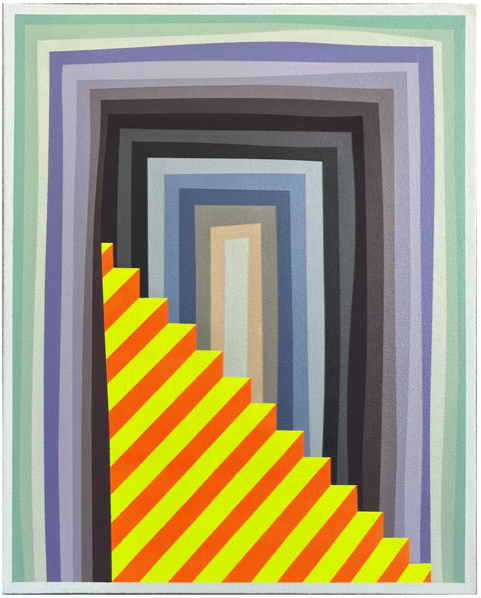 BP: The show consists of two motifs: sawtooths and portals. What is the relationship between the two in your mind?

CC: They’re definitely unrelated. I work in a number of motifs, including crosses and pinwheels, all based on quilting designs. Kevin [Ivester] wanted to show the sawtooths, he had a vision for the gallery’s large wall. I like their wonky wavy uneasiness: they’re relaxing, like the ocean on one hand, but they make you seasick on the other. I was making them simultaneously in the studio, so sometimes the color palette of one would immediately go onto another. There’s a lot of borrowing. But they’re still completely separate streams of work. They’re connected just by the overall thing that we’ve been talking about. The gallery has enough space to explore two motifs: Kevin wanted sawtooths and I wanted staircases, so we smashed those things together.

BP: Is the colorful grid of twenty sawtooth paintings on the large wall inspired by the work of Ellsworth Kelly?

CC: That was Kevin’s inspiration [laughs]. But I do love his work. I hadn’t yet seen his chapel in Austin, so when I first visited the gallery, I went but it was closed that week. I finally did get to see it on the Saturday of my opening. I have some connection to Ellsworth in that as an art student I saw his work in books. I’d look at these flat, colored shapes and think, what is the big deal? Then I went to England in 1997 and they had his retrospective at The Tate. It was a big lesson in needing to see the art in person — the scale and surface and spacing. I bought the heavy book at the museum and backpacked all through Europe with it. Years later, I was working for the Menil Collection, and I met him and told him how much I liked his work. He had a laugh and said normally the people who liked him were 50 years older than me. Now when I do my lecture on geometric abstraction I am sure to say all of that stuff to my students.

When I finally visited his chapel, it was supposed to be cloudy all day. I was a little bit bummed but we still went inside. I was with my wife and five-year old — just us and nobody else — and the sun straight up came out for five minutes while we were in there. It was pretty magical. Carmine, my kid, was running around in the light of all these squares, which he loved. Art deserves to be in a sacred space. 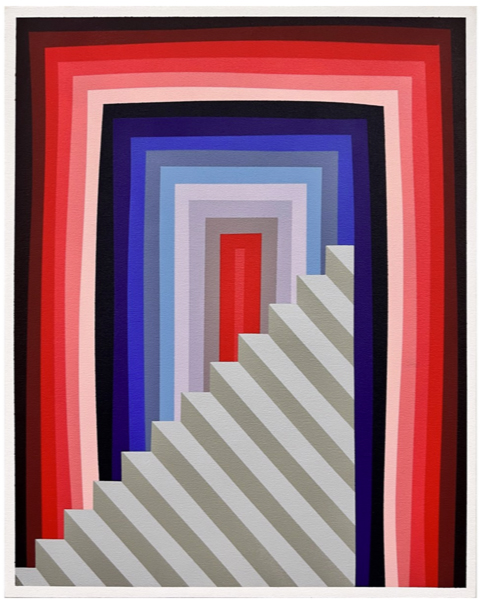 Christopher Cascio: Ascent is on view at Ivester Contemporary in Austin until May 28.

This and That: Christopher Cascio & a Gee’s...