Trembling Pianos: Maya Dunietz at the Bemis Center for Contemporary Arts in Omaha 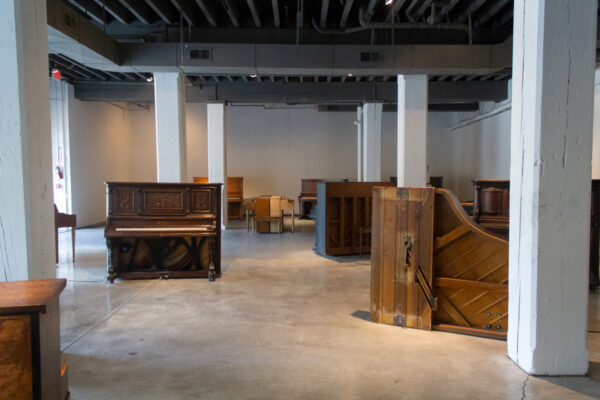 Installation view of “√2,” on view at the Bemis Center for Contemporary Arts

Omaha, eh? People in both Texas and Nebraska were curious as to how I had chosen the geographic center of the U.S. for a summertime visit. In some ways, the answer is obvious: driving due north for 600 miles will take one away from Texas during heatwave season. Also, though, there was a second reason: the Bemis Center for Contemporary Arts. Bemis, which was founded in 1981, has hosted over 1,500 artists-in-residence over the past 40 years. The residency program invited artists to “industrial sites,” until 1995 when the residency relocated to its current home, the massive renovated Bemis Bag Warehouse in the Old Market Town neighborhood of Omaha, on the southern edges of downtown. Similar to Artpace’s program in San Antonio, at Bemis resident artists live in sizable apartments; they also have studio space on the upper floors of the main building and have access to a fabrication lab across the street. In January, I set my sights on Omaha as the place to visit this summer, eager to engage with the programming at Bemis.

Bemis’ residency program has no expectations for visiting artists, meaning they are not required to make or deliver work as a result of their time. In 2019, with funding from the Andrew W. Mellon Foundation, Bemis launched the Sound Art + Experimental Music Program, which supports both a specialized track in the residency for artists working with sound, and a performance series at the Center’s LOW END venue. This has resulted in Bemis’ programs becoming more focused on artists working with sound, and has meant that a sound artist is always curated within the residency cycle. Because of this, Bemis is not only a sought after residency program, but also an attractive venue for programming visual art exhibitions with a focus on sound.

Enter Root of Two, the largest exhibition ever of visual art works by Israeli composer and sound artist Maya Dunietz. The show was curated by Rachel Adams, and opened at Bemis in May of 2022. The lineage of the exhibition starts with Sound Requires a Medium, Dunietz’s 2016 solo showing at the Center for Contemporary Art (CCA) in Tel Aviv. Psychoacoustics, or the scientific study of sound perception and audiology, was the focus of that exhibition. In it, Dunietz exhibited installations demonstrating the relationship between the human body and sound. In Thicket, one work from the show, viewers walked through a network of 10,000 hanging earbuds, through which played a haze of amplified white noise.

The show also featured a work for which viewers had to bite onto a straw in order to hear its sound component. Most relevant to Root of Two, there was Dunietz first “trembling piano,” a work that would eventually find its feet in her current exhibition. Bemis’ curator, Rachel Adams, met Dunietz on a research trip to Israel in 2016. At the time, Adams was working as the Senior Curator of Exhibitions for the University at Buffalo Art Galleries in Buffalo, New York. Dunietz proposed √2, a sprawling installation that required seventeen pianos, and the two stayed in contact. Then, in the fall of 2018, when Adams was hired as the Curator for Bemis, she took her plans to develop Dunietz’s exhibition with her. After the Mellon Foundation granted funds for the sound artist residency, the conditions were right for the exhibition Dunietz and Adams had been working on. This is not common at the Center, Adams told me: “We usually don’t have a resident that translates into a show, but it just made sense for this.” 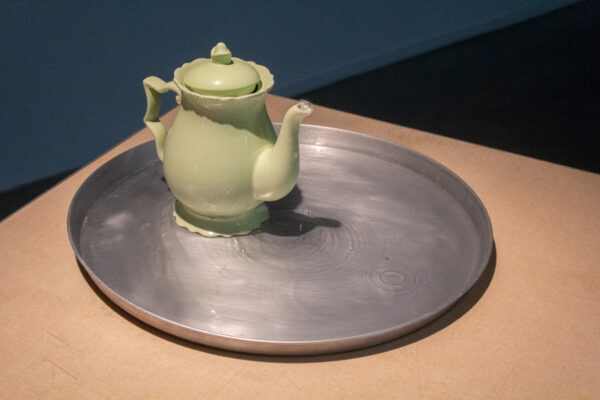 Installation view of “Bemis Surprise,” on view at the Bemis Center for Contemporary Arts

The galleries at Bemis occupy the building’s first floor, are arranged somewhat in a square pattern, and are numbered one to four. In Root of Two, viewers encounter a swarm of pianos rumbling amongst themselves, an overflowing teapot next to a light installation, a band of singing boxes, and a sensory deprivation room with an ambient score. When standing in the first gallery, the viewer can see the overflowing teapot of Bemis Surprise in gallery two, and the solitary silicon mold Brain on a Plate in gallery four.

√2 is the most densely populated work in the exhibition, in the sense that it consists of many physical objects. Seventeen pianos, collected from donations within the Omaha community, are affixed with transducers. These transducers, Dunietz explains over email, “shake the objects connected to them at a given speed and velocity.” Dunietz refers to the modified pianos as “mammoths,” and Ran Kasmy-Ilan, who invited Dunietz for a residency in Herzliya, Israel, calls the group of pianos a “herd” in the exhibition catalog. They are reminiscent of Marguerite Humeau’s ruminations on the capacity for animals to have a collective spiritual consciousness.

Aged upright and grand pianos are arranged with their lids flung open, or splayed on their sides. All of them have wear and tear indicative of an instrument in disrepair, but when the instruments are read as animals, these defects become analogous to matted knots of fur on a majestic beast. The transducers do not directly engage the pianos’ strings, but rather shake the entire consoles, revealing their overall capacity for sound rather than their normal function as a tool of precision. Of the piano’s presence as living objects which change over time, Dunietz’s says, “Over the past four months [of the exhibition], things have loosened. I immediately noticed a difference when I came back from being away for a few weeks.” 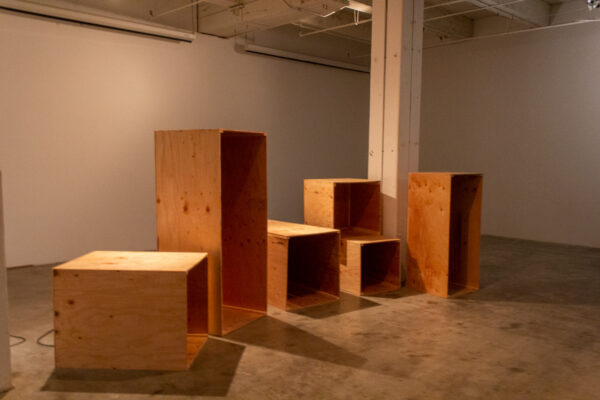 Installation view of “Boxes,” on view at “Root of Two” at the Bemis Center for Contemporary Arts

In other works, Dunietz modifies both the relationship that sound has to an object, and how objects are presented. In Boxes, a sculpture in the third gallery, transducers are attached to a series of constructed wooden boxes that are open on one side. The arrangement is set up to mimic a band on stage. The wooden pieces have no primary intended function like the pianos from √2; instead, they appear as maquettes for a performance in an otherwise empty gallery space. In Air Sculpture, which is on view nearby, there is no art object at all, only a sofa in a nearly pitch-dark room where the viewer can sit and absorb Dunietz’s looping field recordings. “When we enter a dark space, unable to see the surroundings, our other senses sharpen,” Dunietz told me. “We might not be aware, but our brain is constantly analyzing everything we hear, building and improving its mapping of our environment according to the reflections of sound around and inside us.” At each point of the exhibition, the premise is that sound is a phenomenon of human consciousness that can be witnessed and experienced.

The show’s title, Root of Two, references the Pythagorean theorem, which states that the sum of the squares of adjacent sides of a right triangle is equal to the square of the hypotenuse. The square root of two does not divide neatly, and its decimal trails on infinitely. In Kasmy-Ilan’s catalog essay, he describes how this applies to the tuning of pianos: “A piano exquisitely tuned to one scale shrills discordantly in another… instead of following the natural Pythagorean intervals, an artificial paradigm was selected whereby octaves were divided into twelve essentially equal parts. Strict adherence to the Pythagorean regime was relaxed to allow for transposition.”

Despite the engineering involved in a piano’s construction, there are some things for which math cannot prepare. However, math is still a useful language for describing sonic phenomena. In the work 25h –25fps, a video shows a foil-wrapped speaker blaring sound at 25 hertz. Because the vibration of the sound is close to the frame rate of the video, the movement of the speaker becomes difficult to perceive. Dunietz is finding the resonance point of objects or groups of objects in the works on view.

In a discussion between Dunietz and Michael Pisaro-Liu for the exhibition catalog, Dunietz explains her process of finding these points:

“In my experience with the compositional process, in the beginning, you have a concept, and you build a system of some sort, and you play with the material, you stretch it, you flip it, you do all sorts of things to it. Then, at some point, you’ve produced enough or output enough, and you look at it, and the shape it has is a little surprising… This system that you invented–whether it’s harmonic, rhythmic, conceptual or physical–seems to develop its own direction and takes things somewhere unexpected.”

Installation view of “√2,” on view at the Bemis Center for Contemporary Arts

Dunietz starts with an idea, and then works through it until she gets surprised. Both √2 and 25h –25fps show how resonance appears at intervals which bear out through mathematical principles. At the center of Dunietz’s visual art is the idea that humans are bodies which can understand things through the brain’s intake of sensorial space. Root of Two is a collection of Dunietz’s investigations into the phenomenology of sound, and an example of the breadth a sound artist can achieve when given the space to do so. Further, it shows that amazing things can happen when institutional support can properly match an artist’s ambition and vision.

Visiting Omaha Artists in their Studios