William Wegman is a painter. I do realize that this may come as a shock to some, because until now, many of us have been predominantly familiar with Wegman’s best-known artworks: his Weimaraner portraits. This is due in part to both marketing and public appeal — who doesn’t love seemingly candid (but actually meticulously staged) photos of cute dogs? Or, bashful portraits of said cute dogs dressed up like people?

The multimedia dog works had an understandable springboard: Wegman was invited to appear on David Letterman’s show in 1982. During the appearance, Letterman introduced the charmingly dry, deadpan, and funny Wegman as a video artist. Wegman went on to say that he got into video works because “in the late 60s, painting was dead.”

Weimaraner appreciation was introduced to a new generation in the late 80s and early 90s when a Sesame Street producer contacted the artist about making short videos for the program. Since then, of course, Wegman’s dogs have appeared on address books, calendars, in children’s books, and more.

While Wegman’s 2006 traveling retrospective organized by the Addison Gallery of American Art was all-inclusive, and a book documenting 20 years of his paintings was released in 2016 (around the same time Glasstire brought the artist to speak in Houston), the works have remained, in public perception, at least, an anomaly of his output. And even when these pieces get the spotlight in painting-only presentations, like the artist’s 2016 and 2012 solo shows at his New York gallery, Sperone Westwater, they still tend to be overshadowed by his populist, canine-forward portraits. 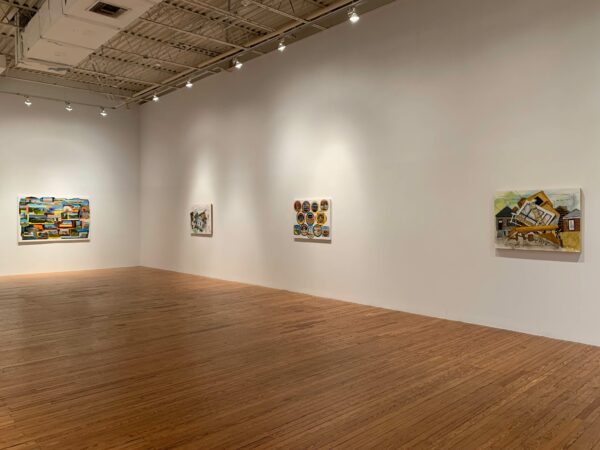 In Texas Gallery’s current exhibition, William Wegman: Painting by Artist, Wegman sets out to prove, once again, that he has the same humor and same talent with a brush as with a camera. Featuring ten new paintings — four signature postcard works, five disaster paintings, and one piece that fits neither series — the show is an argument for why the artist shouldn’t be pigeonholed. 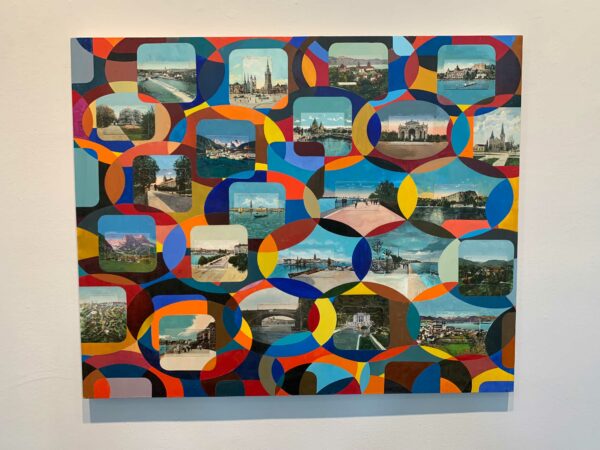 If you’ve come across a painting by Wegman, you’ve likely seen one of his postcard pieces. These utilize vintage postcards that depict landmarks, vistas, motels, and other attractions. The artist expands the borders of the found images with paint to create scenes that surround scenes. In previous works, Wegman has often collaged individual postcards into one larger, comprehensive picture. In Painting by Artist, however, vignettes are king. The formula is deceptively simple: place multiple postcards on a panel, imagine and extend the scenes just enough to reframe their narratives, and then halo the composition in bold blocks of color. 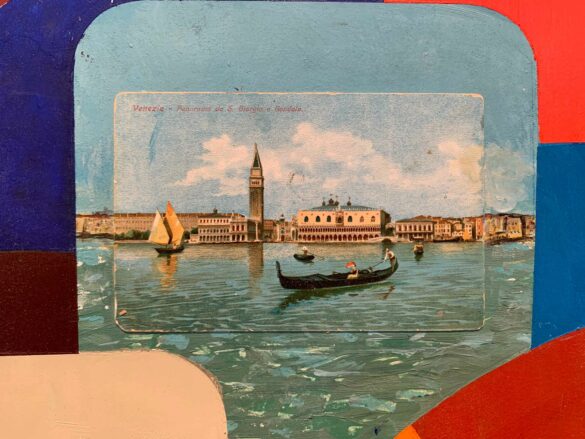 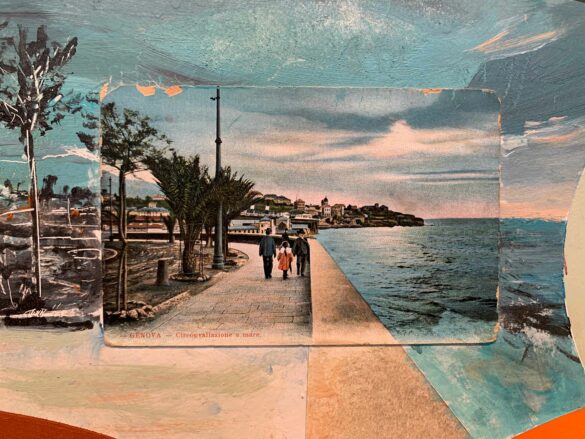 Ovalesque, the painting that first greets viewers, is an example of Wegman’s postcard ethos over the past three years. Compared to other postcard works, many of which depict a single sweeping interior with multiple perspectives and vanishing points, Ovalesque is a celebration of travel and the outdoors. The vanishing points are still here, but they’re per-postcard and segmented into their own narratives. Rivers, temples, mountains, and public plazas abound, which, as the piece was made in 2020, give off a feeling of pandemic longing. 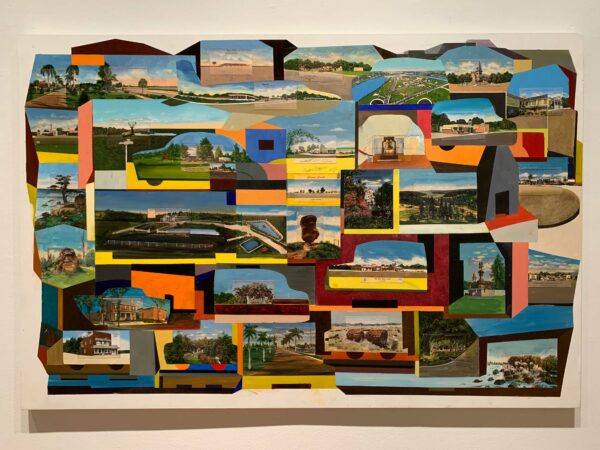 The largest work in the show, Travelogue, continues this sentiment. Coming out of the genre of American landscape painting, this piece is a celebration of past Americana. Postcards in the painting act as a sort of map of the nation, displaying various local motor lodges and national monuments, such as a Redwood tree, the Liberty Bell, and the boyhood home of Woodrow Wilson. Placing the commonplace and the iconic side by side, this is a fantasy road trip that would make any red-blooded American swoon. 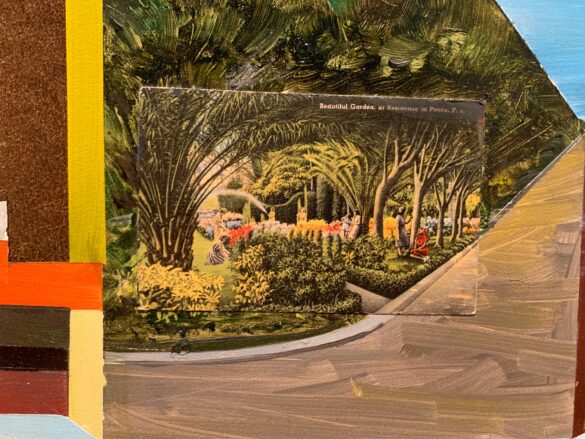 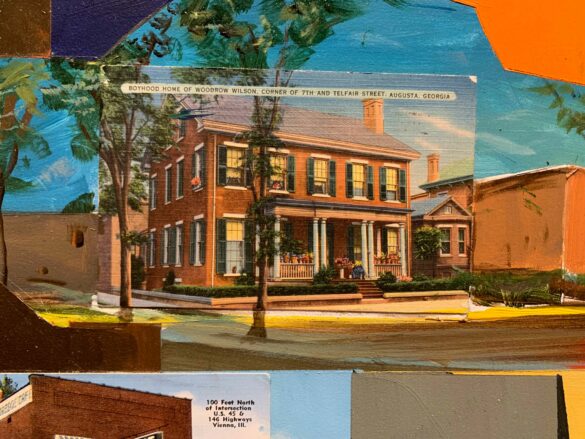 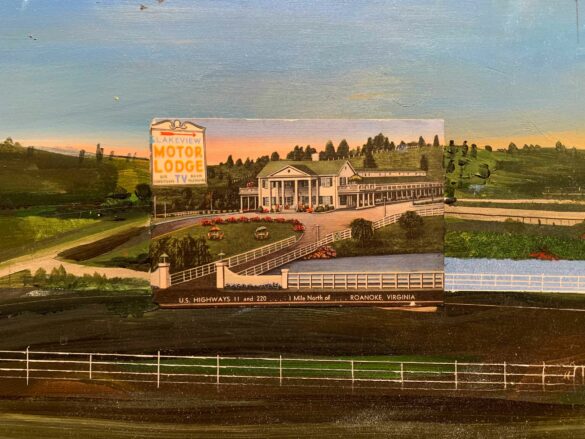 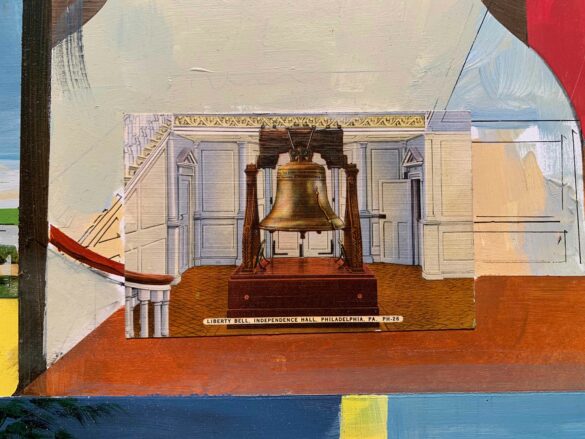 The other series of works may come a bit out of left field, even for Wegman lovers. They’re a new direction for the artist, and depict, in acrylic and charcoal, various destroyed houses. Each painting has a descriptive title — Long Term Water Damage, Beach House, Tree Fell on House, Re Build, and Construction Problem — which, in the context of Wegman’s dry wit, comes off as ironically funny. The deeper humor of these individual disasters is indicated by small, sometimes-hidden commentaries the artist has added within the scenes. In Tree Fell on House, for example, the words “look out” are lightly scrawled above a first-floor window; “oh” is inscribed inside of a second-story gablet that leans at a dangerous angle. 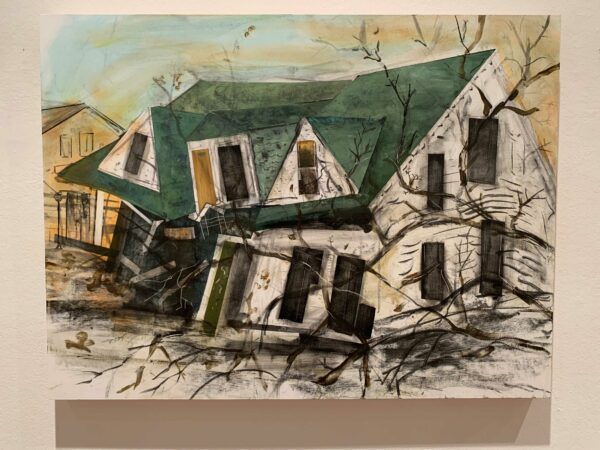 These pieces have an incompleteness that contrasts with Wegman’s postcard works. The disaster paintings are not about presenting a bigger picture of the scene itself, but are instead highlighting the individualized elements that made up that which has been destroyed. Whereas the postcard paintings pull out, these zoom in; they almost look as if they could be insurance claim documentation. This isn’t to say they’re badly painted — on the contrary, Wegman has clearly applied his years’ worth of experience handling the medium to these works. There’s a trompe l’oeil, tape-looking quality to them that is hard to master. 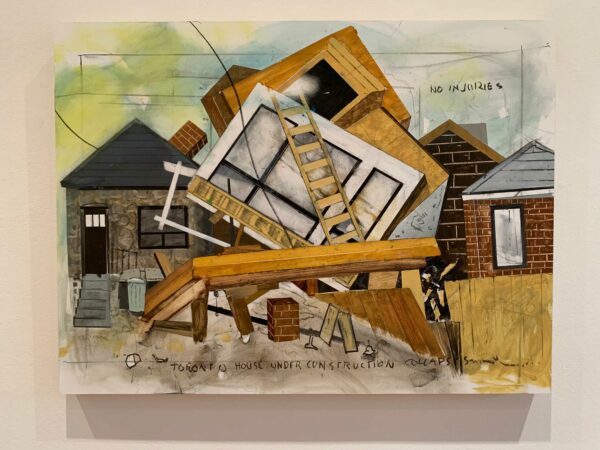 If you’re a Wegman fan, or a fan of good painting, this is a show to see. The artist has been hammering away at the medium far too much for these works to fly under the radar any longer. It’s my hope that, as Wegman’s paintings gain more exposure and recognition (his two other shows on view this summer, at Sperone Westwater in New York and Marc Selwyn Fine Art in Beverly Hills, also featured a trove of paintings), that the powers that be will see they’re worthy. While the Museum of Fine Arts, Houston, the Museum of Modern Art, and other institutions are collectors of the artist’s videos, photos, and drawings, his paintings have gone more or less unaccessioned. It’s only a matter of time before some keen curator or museum director realizes that a Wegman collection (and a collection of contemporary American painting) is not complete without one of the artist’s scenes.

William Wegman: Painting by Artist is on view through September 10, 2022 at Texas Gallery in Houston.

Agreed. The disaster paintings are exceptional — skill-wise, in their composition, and of course in their dry, Wegmanish funneyness. “Beach House” belongs in the Galveston beach house of someone with a very elastic sense of humor.

A beautiful show, one not to be missed.