by Rosa Boshier González May 15, 2022
FacebookTwitterEmail 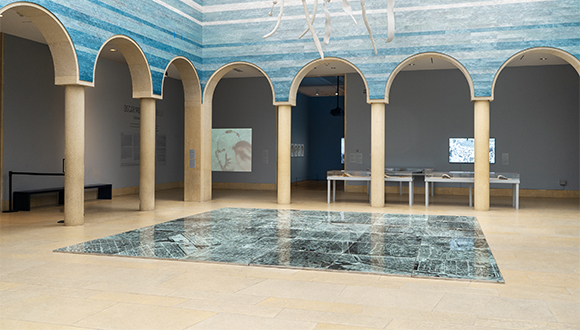 Installation view of “Oscar Muñoz: Invisibilia” at the Blanton Museum of Art, The University of Texas at Austin. On view February 20-June 5, 2022

In Ambulatorio (Walking Place/Outpatient Ward) (1994-2008), the first piece in Oscar Muñoz’s retrospective exhibition Invisibilia, currently on view at The Blanton Museum of Art, the viewer steps onto an aerial image of Cali, Colombia, installed on the floor of the exhibition space. Created during the deadly cartel wars in Colombia,  where rival drug cartels vied for ownership between Cali and Medellín, the walkable map’s grid is covered with a fractured surface of glass, reflecting the constellation of bombed buildings and blown out windows that Cali pedestrians encounter daily. The cityscape itself is also fractured: the only continuous image in the piece is the Cali River, which runs through western Colombia and the city of Cali. The incongruousness between the map’s legibility and the consistency of the river point to the strange, indecipherable logic of violence.

This obsession with parts that may or may not make a whole is consistent throughout the meticulously curated exhibition. Moving further into the gallery space, one encounters Muñoz works grouped together under the subtheme “Pasa La Página: Turning the Page” that explores, over two decades, his fascination with text as raw material. In pieces like Paístiempo (Countrytime) (2007), a pyro-engraving on newsprint, Muñoz manipulates content in Colombia’s national newspaper El País to expose the repetition and flippancy with which mass death is treated in the media. As Muñoz put it, “Paistiempo is an archive that does not circulate information…The news repeats from page to page until it becomes almost imperceptible marks on paper.” Here, newsprint and text, often seen as arbiters of objective fact, become vulnerable in Muñoz’s hands — malleable and up for interpretation. 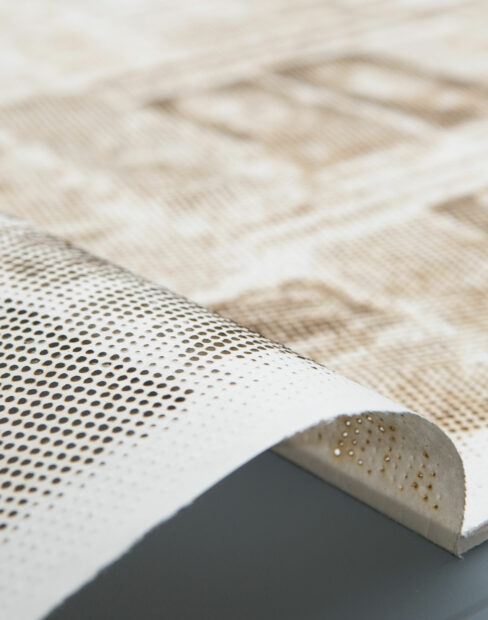 Muñoz was born in 1951 in Popayán, Colombia and now lives in Cali. He was part of the infamous 1970s artist collective Grupo de Cali, which included celebrated filmmaker Luis Ospino and writer Andrés Caicedo, who gained a cult following after his untimely death. In the wake of this early involvement in the avant-garde, Muñoz developed a cerebral, meticulous body of work that speaks to the universal experience of impermanence, the vulnerability of memory, and the relentless, almost mundane, irrationality of war. Though the artist is widely shown in Latin America and Europe, Invisibilia is Muñoz’s first retrospective in the United States, and features forty works created throughout five decades in various mediums. 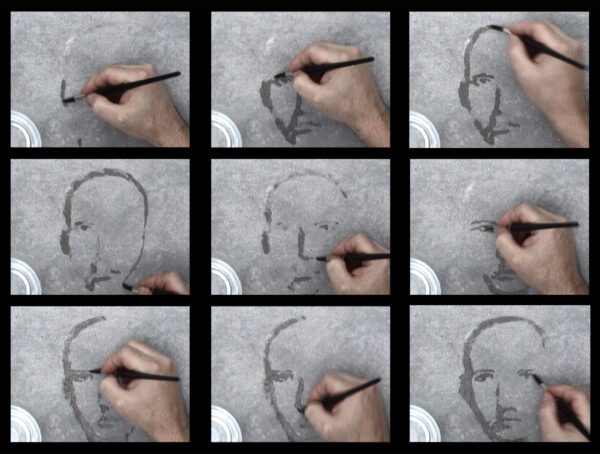 As one draws closer to the second exhibition room, the viewer becomes further located in the history of Muñoz’s work, and can track the evolution of his creative development. The works stray further and further from his photography and charcoal drawings into the forensic — Muñoz gathers materials and reinterprets them, collecting evidence as one would build a case for a crime. In Re/trato (Portrait/I Try Again) (2004), Muñoz sketches a portrait of his own face in water on cement, only for the water to evaporate in the sun before the piece is finished. Still, he continues to attempt the task. In Narciso (2000), Muñoz silkscreens an image of his face over standing water in a sink using charcoal dust, then pulls the drain plug. Little by little, the image disintegrates. These pieces hold a strange adjacency both to Andy Goldswothy’s time-based nature works and to the legacy of 1970s body art, as characterized by Ana Mendieta’s Untitled (from the Silueta series) (1973-1977). They hold the specificity of the body but, as renderings of the body, they lack corporeality while still retaining embodiment.

Many of Muñoz’s works find intimacy in the abstract. 4×3 (2013-2017) is a Bauhaus-looking work from afar — sterile, impersonal, emblematic of “universal” modernity. Yet, the piece becomes deeply personal. Upon closer examination, one sees that the piece is composed of empty portrait photographs, the images of the subjects cut out. What remains are weathered necks, hunched shoulders, chunky sweaters, and stiff neckties. The piece conveys a sense of loss, the residue of, as curator Vanessa Davidson puts it, the “ghostly blank” where a body once was.

In Série Impresiones débiles (Weak Impressions series) (2014-5), Muñoz over-exposes well-known photographs in Colombian history, then manipulates the image to focus on a figure often-overlooked in the photograph. Here, Muñoz undermines the assumed heroes within these historical moments. In El Testigo (The Witness) (2011), Muñoz zeros in on the blind witness present at a 1953 truce between guerrilla groups during Colombia’s La Violencia, a ten-year civil war between dominant political parties. The artist maintains that these images were actually aimed at identifying and killing guerrilla fighters as opposed to documenting peace. Even the name of the series speaks to the farce of historical record, yet the word “impressions” still implies their hegemonic power on society. Muñoz subverts this nationalist purpose, highlighting alternative heroes. 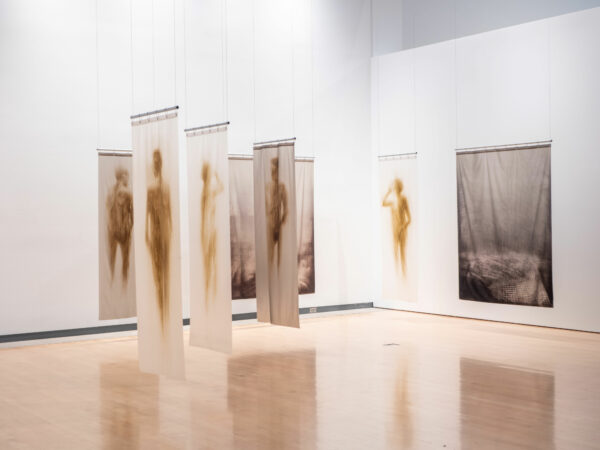 Cortinas de baño (Shower Curtains) (1985-86), a piece located at the heart of the exhibition, features a life-size collection of blurred nudes behind shower curtains. The obscured exposure of these central figures complicates one’s understanding of intimacy, suggesting that intimacy does not necessarily require closeness or traditional visibility. This linkage between intimacy, illegibility, and abstraction echoes Muñoz’s decades-long engagement with the remains of the dead, drawing connections between closeness and ephemerality.

Though Muñoz maintains that his works are more poetic than political, many of the pieces are made of the materiality of Colombian political violence. In the work Tiznados (Tainted) (1990s), named after a 1990s paramilitary group, Muñoz uses the ashen material of charcoal, in and of itself symbolic of death, and gesso on paper and wood to rework, dematerialize, and abstract overexposed images of unidentified murder victims, again pointing to the Colombian media’s role in the desensitization to violence. Pixels (Pixels) (1999-2000) recreates the faces of anonymous victims killed in the crossfire between the Colombian government and guerrillas using sugar cubes stained with coffee, both major Colombian exports and symbols of global capitalism and labor exploitation. This raises questions around public mourning and recognition: Who gets to die? Who gets to be grieved?

Oscar Muñoz, “A Través del Cristal [Through the Glass],” 2008-2018, video-installation with sound, LCD screens with wood, metal, and plastic frames, variable dimensions. Collection of the artist. Photo courtesy of the artist.

Several of Muñoz’s works engage with the idea of implication. A través del cristal (Through the Glass) (2008-18) is comprised of framed family photos of people who have died or left their loved ones. The frames and photographs are exact replicas of those kept at home by individuals that Muñoz knows personally. In the reflection of these prized, framed photographs, Muñoz has placed video recordings of the loved ones left behind in their daily routines, operating in the shadow of loss.

Oscar Muñoz’s body of work on display in Invisibilia manages to be conceptually rigorous while remaining affecting and intimate. Walking through the thematically curated gallery space — from textual works to pieces that engage with memory, impermanence, and loss — the walls ring with audience comments of awe and curiosity. Muñoz’s work invites viewers in while expanding their understanding of political violence and, as Muñoz puts it, “the psychosis of war.”

Invisibilia is on view at the Blanton Museum of Art through June 5, 2022.

Rosa,
Thank you for your insightful review on Munoz’ work. I’ve followed his work for the past twenty years, and you explained his key ideas and themes so well. Impermanence, shortness of memory, loss due to political violence. I loved what you said about his work as conceptually rigorous, yet affecting and personal. The poetry and performance of his practice is so moving.

Saw this fabulous show in Tucson. I had never heard of him—now a huge fan! I agree, conceptual strong, technically innovative and affecting. I will make a trip from Dallas to Austin to see the work again.