Join Us in a New Year’s Eve Tradition: Performing Ken Friedman’s “In One Year and Out the Other”

From widely held cultural traditions to unique traditions practiced by individuals and those closest to them, the holiday season is about preserving meaningful customs. Sometimes we continue these traditions out of habit and with little thought, and other times the routine of annual traditions can be deeply personal. In recent years, Glasstire has maintained the tradition of encouraging our readers to perform Ken Friedman’s In One Year and Out the Other on New Year’s Eve.

Mr. Friedman joined the Fluxus group in 1966, four years after its founding by George Maciunas. Though there were wide-ranging beliefs and opinions about the Fluxus’ methods, this global collective of artists, musicians, and other creatives mainly focused on performances and organizing events. Mr. Friedman’s New Year’s Eve piece was originally performed in 1975 and is written as follows: 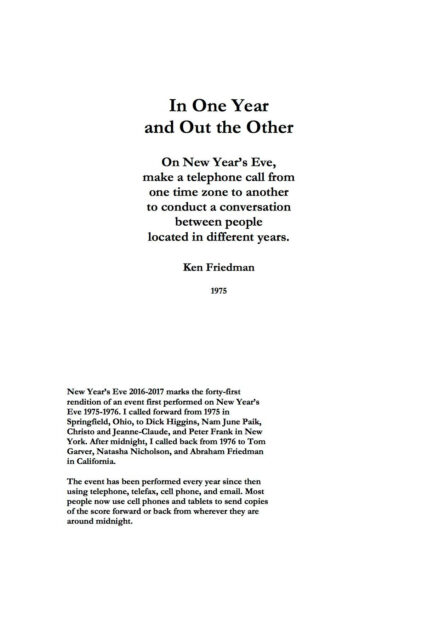 For the inaugural rendition of the piece, from his home in Springfield, Ohio, Mr. Friedman called his fellow artists Dick Higgins, Nam June Paik, Peter Frank, Christo, and Jeanne-Claude in New York, where the New Year had already materialized. Then, after midnight in Springfield, Mr. Friedman called California-based artists Tom Garver, Natasha Nicholson, and Abraham Friedman, who were still awaiting the year’s change.

Like many Fluxus works, while at first glance this performance might appear overly simple, it has significant depth. We live in a world, in a society, where everything (and maybe everyone) is just a click away. In One Year and Out the Other asks us to stop and consider time and distance in a way that we often don’t. And what better time to slow down and consider these things than at the cusp of the changing year?

New Year’s Eve is a time for reflection and setting new intentions. Perhaps, by taking a moment to deliberately engage in this performance piece, we can all experience the changing of the year and the distance of both time and space in a new way.