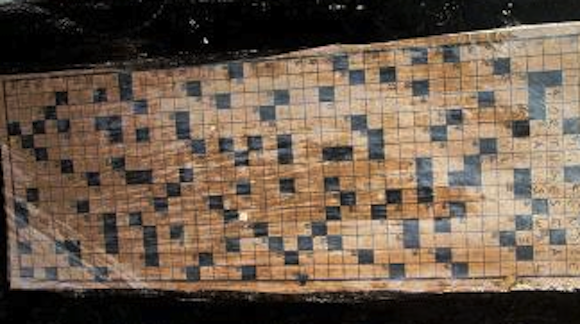 Last month, a 90-year old retired German dentist, identified only as Hannelore K., visited Nuremberg’s Neues Museum, where a 1977 creation by the Fluxus artist Arthur Köpcke was on display, reports Ars Technica UK. The work, in the form a crossword puzzle, is estimated to be worth $89,000.

The puzzle’s clues are written in English and include the phrase “insert words.” Frau K., who understands English, immediately got to work. When it was discovered what she had done, the police were called in, to whom she argued that if the museum didn’t want visitors to listen to the artist, they should have posted signs.

Now, her lawyer has produced a seven-page document (it’s in German) that not only refutes the accusation of vandalism, but claims that his client has increased the value of the work by calling attention to the lesser-known piece. Furthermore, the “collaboration” is true to the spirit of the Fluxus movement. Lastly, her lawyer posits that her additions meant that she now held the copyright of the combined artwork.

The work has since been removed by the museum and restored. Frau K. and her lawyer claim that the private collector, who originally lent the Köpcke, could sue the museum for destroying the new and improved collaboration.