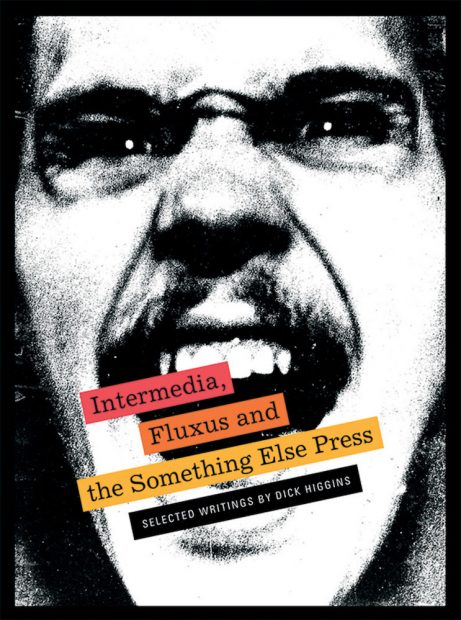 Intermedia, Fluxus and the Something Else Press: Selected Writings by Dick Higgins 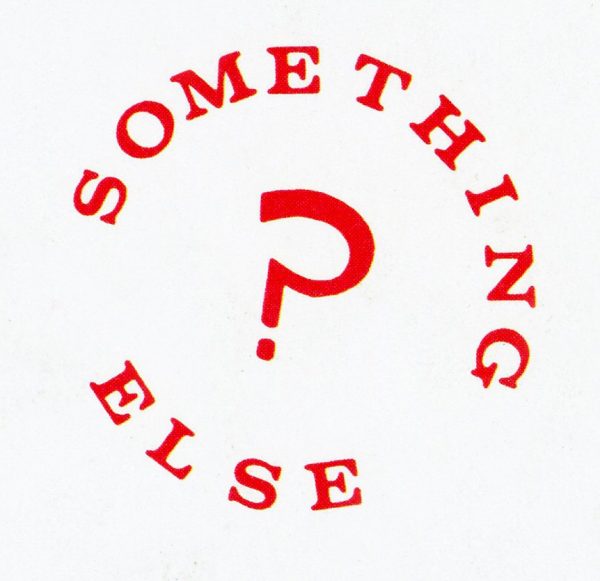 Dick Higgins was frustrated with George Maciunas because of his many delays of publishing Higgins’s book Jefferson’s Birthday, so he went over to Maciunas’ studio to retrieve the manuscript, then went out and had a few drinks. Afterward, Higgins returned to his studio to inform the artist Alison Knowles, with whom he was living, that they had founded a press in order to publish this book.

“That’s terrible. Call it something else.”

​— from A Something Else Manifesto, Great Bear Pamphlet, 1966 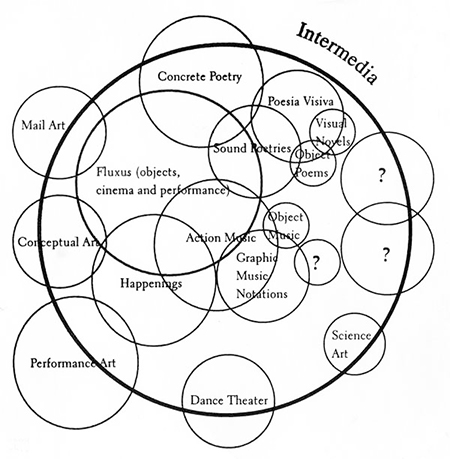 The great thing about Selected Writings by Dick Higgins is that you don’t have to be a Fluxus scholar to enjoy it. Dick’s ideas were never meant just for the narrow art world, but rather, for “society as a whole.” When George Maciunas had the scheme to disseminate Fluxus ideas through cheap, mass-produced editions, Higgins reasoned for another path, determining that avant-garde ideas could be more successfully broadcast through a highly developed distribution system already in place: books and publishing.

Consider the physical thing, for example: the book itself. As a book object, Selected Writings by Dick Higgins feels good to hold. It’s a comfortable size. The paper is nice to the touch. The binding of the spine allows the book to open and stay open comfortably. And why shouldn’t it work well as a book? It’s all right here in Dick’s essay What to Look for in a Book – Physically (1965), a studied essay about the right way to make a book — the correct paper, typeface, binding, etc. If one is in the business of publishing, it may help to know how a book should be properly made so “to be as fresh ten years from now as they are today, and as much of a joy to behold.”

A book, in its purest form, is a phenomenon of space and time and dimensionality that is unique unto itself. Every time we turn the page, the previous page passes into our past and we are confronted by a new world.

Selected Writings by Dick Higgins starts off with a wonderful introduction by Ken Friedman. Ken, the youngest of the Fluxus artists, and perhaps its most authoritative chronicler, having written numerous scholarly essays in books and catalogs, worked for Higgins as the General Manager of Something Else Press for a short while in the early 1970’s. He should know.

​Higgins’s broad swath of essays spanning more than thirty years unfolds chronologically beginning with the Something Else Newsletter from the 1960s, and concludes with some of Higgins’s final essays from the 1990s about the history of various forms of experimental poetry.

A special addition, and an incredible resource appearing smack in the middle of this volume, is a complete compilation of everything ever published by Something Else Press. It even includes the stuff they wanted to publish but didn’t, or couldn’t, after Something Else Press went bankrupt and belly-upped.

​At the end, Selected Writings by Dick Higgins concludes with a series of “snapshots” by Hannah Higgins, Dick’s daughter. These make for a special and intimate mini-memoir of childhood memories of her dear and sometimes confused “Pui.”

It is hard to say where I came from; certainly my parenthood is uncertain, and I’ve always thought of myself as something of a mongrel. I have always belonged to many worlds, and the world we live in now is always suspicious of such divided loyalties. I seem to pass in and out of fashion the way a weaver’s shuttle moves across the loom, always moving from in to out, from warp to woof. In any case, it seems to me that my history does not begin with conception but with perception, whatever the reaction to me may be.

The cover [pictured at top] may look familiar to Fluxus afficionados. It’s the well-known B/W photograph of Higgins, taken by Wolf Vostell, full-faced, screaming his Danger Music No. 17. 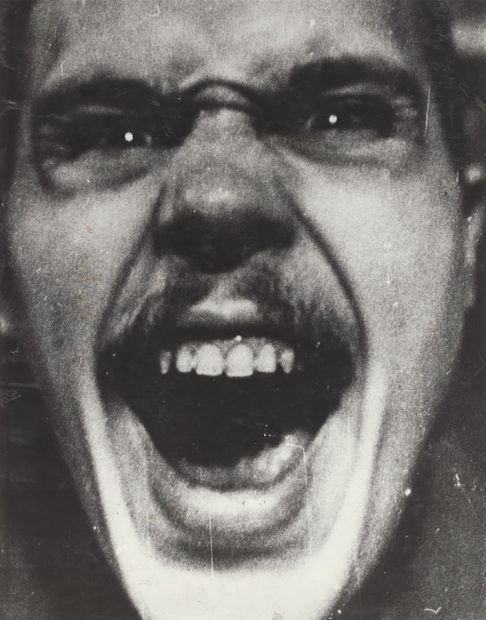 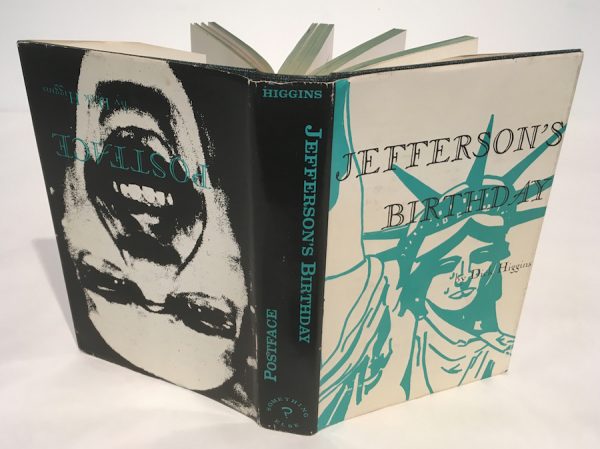 Dick Higgins, “Jefferson’s Birthday/Postface”
©1964, Something Else Press, collection of the author

It’s the same image used on Higgins’ Postface, the upside-down back cover for Jefferson’s Birthday,  Higgins’ early tome of everything he wrote over the course of exactly one year spanning between April 13th, 1962 and April 13th, 1963 — Thomas Jefferson’s birthday.

Excerpts from Jefferson’s Birthday and Postface are reprinted in Selected Writings by Dick Higgins so that the reader is spared having to search the internet for rare and expensive originals. Indeed, many of the writings in this book — letters to friends, flyers, and selections from the Something Else Newsletter —  are not just reprinted, they are reproduced in original form, via facsimile, complete with imperfections, folds and creases so that the reader has a feel for the original publications.

​If you are not familiar with Dick Higgins yet (lucky you) I won’t spoil all the fun. But I’ll reveal a few tasty morsels: You’ll learn about the term “intermedia,” what it means, and where it comes from. You’ll learn about early pattern poetry, ekphrasis in writing, ideas about jokes, the correct attitude when performing Fluxus works, what Fluxus is not, and why, perhaps, that Dick Higgins suffered from numerous nervous breakdowns and bouts of alcoholism, yet was still adored by friends and family. His “Aphorisms” from Five Traditions of Art History, an Essay is as valuable and pertinent as Sol Lewitt’s Sentences on Conceptual Art or Claes Oldenburg’s I Am for an Art. (Oldenburg was a friend and early collaborator.)

Movements in art are illusion, caused by such things as fashion, statistics or aesthetic politics.

We must take special care not to influence ourselves.

The view is always fine, if we will but open our eyes.

Although it’s been decades since most of these writings first appeared, you’ll be surprised at how relevant, and needed, they are today. The work and ideas of Dick Higgins make me happy. Intermedia, Fluxus and the Something Else Press: Selected Writings by Dick Higgins will make you happy, too. Buy it. Read it. ​

[Postscript: Dick Higgins died of a heart attack in Quebec on October 25, 1998, exactly twenty years ago to the day from when I wrote this.

Hey, where did you get your hands on the actual book?

“Selected Writings by Dick Higgins” may be purchased from Siglio Press at the link at the top of the article and here: http://sigliopress.com/book/dick-higgins/