Home on the Range and Sacred Lands: The West as Home at the Stark Museum of Art

Images of our country’s Southwestern landscape began to manifest in pop culture, art, and literature in America and beyond during the nineteenth century. Romanticized visions of the rugged terrain and its inhabitants, including settlers, cowboys, and Native Americans, still, to this day, project mythologies of the American West that permeate the universal imagination. Considering both this mythic vision of the region from American and European artists, and through objects created by Indigenous makers, The West as Home at the Stark Museum of Art in Orange, Texas considers how the concept of home is expressed in works from the institution’s Southwestern Art collections. 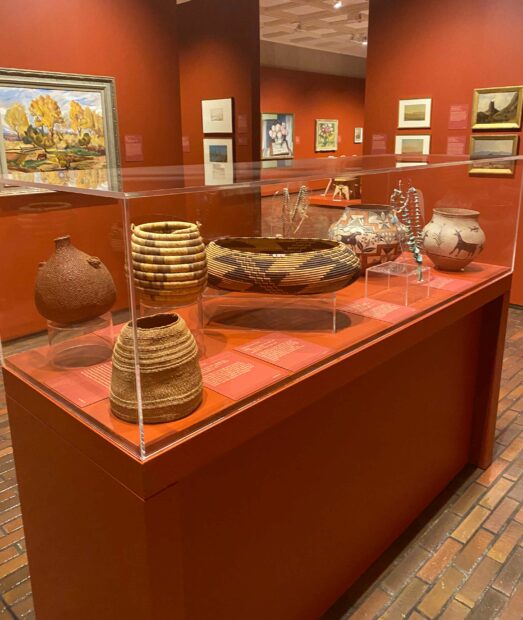 Gallery view of “Land” in The West as Home at the Stark Museum of Art. Image provided by author.

In the show’s first gallery, paintings, Native American weavings and ceramics, and a documentary video explore the theme of land. The video features contemporary multimedia Hopi-Choctaw artist Linda Lomahaftewa discussing her art practice. She traces aesthetic influences from her ancestry as well as from the region itself; her artworks, which are shown in the video, reflect her interest in representing geographical features, such as mesas, to invoke a sense of place. Additionally, her multimedia works depict graphic motifs relating to Hopi symbolism, and also include imagery from ceremonies, prayers, and the landscapes of Arizona and New Mexico. Other artworks made by Native Americans in this gallery are included in a display of pottery, basket weavings, and jewelry. The materials used for these works were sourced from the lands that the Acoma Pueblo, Hopi, Nez Perce, Pomo, Klamath, Apache, and other Indigenous peoples occupied, before their forced expulsion by Anglo settlers and the U.S. government.

One clay Jar by an Acoma Pueblo maker is nearly 900 years old and depicts elk and flower outlines using a graphic black and white motif of geometric shapes and bold linework. A bright orange terracotta color made from natural pigments culled from the land serves as the central design’s base, background, and accent color. Other materials that make up the objects in this display include various clays, grasses, shells, and stones, like turquoise; these materials reflect the region, the cultural aesthetics of their respective tribes, and serve practical and symbolic functions. 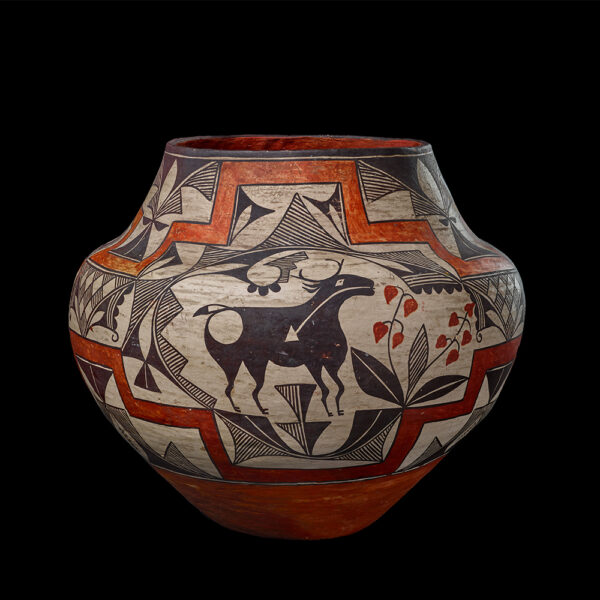 The paintings in this gallery by Anglo and European settlers in the Southwest mythologize both the Native Americans they encountered and the expansiveness of the area’s land and sky. Frank Tenney Johnson’s Watching the Wagon Train (1917) posits a picturesque sunset as the dramatic backdrop of his work. In the painting, an Indigenous family is surveying the horizon as a small covered wagon rolls towards their home. A dying campfire and the impending darkness ominously allude to the historical erasure of Native Americans during the nineteenth and early twentieth centuries. Other paintings capture the geographic diversity of the Southwestern landscape during different seasons. Some works depict fields of blooming bluebonnets and wildflowers rolling over flat plains in the spring, while other scenes of prairies are painted empty with the golden glow of long summer days. Paintings of landscapes from even further west feature mountains and mesas as backdrops to the works’ depictions of the changing foliage of fall; others prominently feature snow-capped mountains and cabins in wintertime.

The next two galleries focus on the themes of shelter and interiors, the former depicting dwelling spaces, and the latter considering how one designs their home to reflect familial values and identity. Photogravures, paintings, and a Diné (Navajo) weaving depict architectural styles of houses and civic spaces of the Southwest. In the early twentieth century, photographer and ethnologist Edward S. Curtis documented Native Americans through the greater Western region. In this gallery, the Stark Museum of Art displays their recently acquired series of photographs by Curtis of Zuni Pueblo structures. The buildings’ flat roofs of varying levels permitted occupants to include communal meeting spaces within the design of their homes.

Paintings in the gallery vary in style, as artists at the turn of the century continued to paint using variations of a romantic, narrative style (as in the melodramatic The Door Was Flung Open Suddenly… (1918) by Frank Tenney Johnson). Other artists from the same period experimented with Modernist forms: Victor Higgin’s Winter Walk (1935), with its clustering of beige buildings, angular telephone poles, and gas station signs, collapses the picture plane and plays a Southwestern counterpart to Stuart Davis’ New York streetscapes.

Gallery view of “Shelter” with Diné Rug (c. 1950) on left and Winter Walk (1935) by Victor Higgins on right in The West as Home at the Stark Museum of Art. Image provided by author. 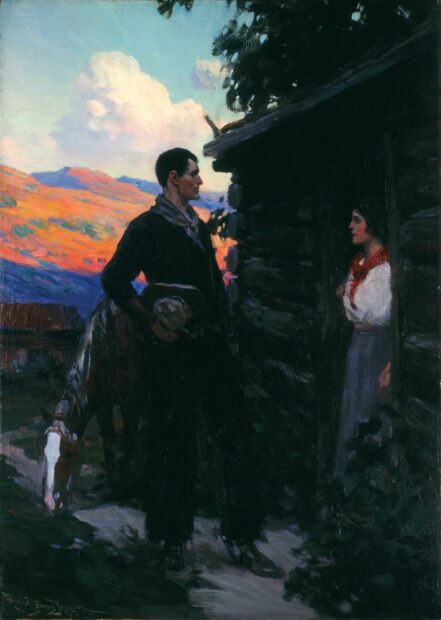 The most striking work in the “shelter” gallery is a Diné (Navajo) Rug (c. 1950). Woven into the piece are stylized depictions of single-story homes found on contemporary reservations, along with images of two-story buildings interpreted as “Indian schools.” While the design of the reservation buildings and the function of the school represent Native Americans’ forced assimilation into the mainstream American way of life, depictions of chiefs with war bonnets suggest the survival and perseverance of their culture in the face of institutional erasure.

An Arapaho Tipi Door (ca. 1900) marks the entrance to the next gallery, which considers the concept of interior space through the expression of individual and group identities, and the everyday comforts of home. The canvas Tipi Door contains the outline of a shield constructed with beads, wool, leather, and deer hoofs. The design inside the shield identifies the tipi’s original owner. 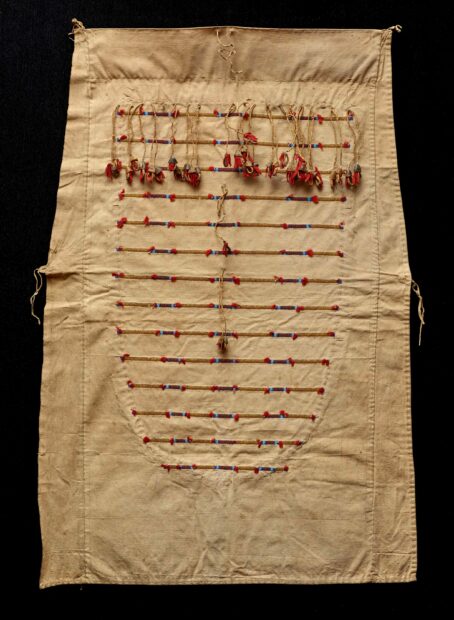 A series of paintings in this gallery captures the interior details of Anglo settlers’ homes. The objects depicted in the works — woven rugs, ceramics, and other craftworks — were sourced from local Indigenous people and served decorative functions in the homes of the twentieth-century settlers. Opposite from these paintings are still life pieces by American and European artists; the paintings feature regional flowers, like peonies, daffodils, dahlias, and asters. Andy Anderson’s life-size wooden Dining Table (1950), in the center of the gallery, includes hand carved caricatures of the artist’s family and friends on individual chairs, which designated place settings for gatherings. 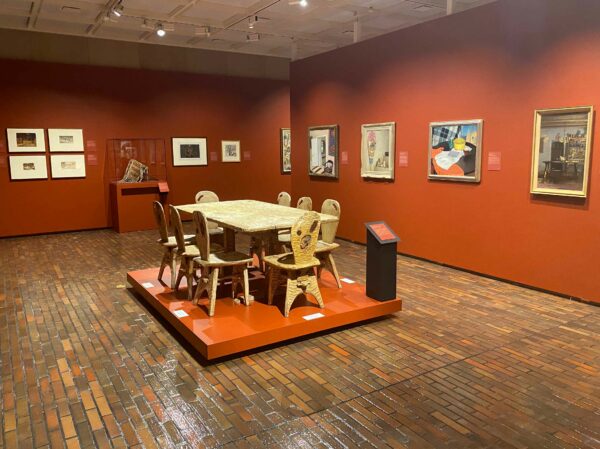 Gallery view of “Interior” with Dining Table (1950) in center in The West as Home at the Stark Museum of Art. Image provided by author.

The themes of gathering and community continue in the exhibition’s next gallery, which considers the concept of family. Pieces of blackware pottery in the installation are the works of Maria Martinez, who is of San Ildefonso Pueblo heritage. With her practice, Martinez continues her ancestral tradition of creating ceramics using the techniques and motifs taught to her, her siblings, and her cousins. Portraiture throughout the gallery by American and European artists depicts both settlers and Indigenous families in the middle of daily routines, including the act of weaving and the tender moments of motherhood. One large portrait, Ourselves and Taos Neighbors (c. 1940)by Ernest Leonard Blumschein, expands the idea of the family from the nuclear unit to the greater Taos community.

The West as Home considers both settler and Native American perspectives through their works that capture the spirit of the Southwest, including landscapes, portraits, early photography, and Indigenous craftwork. Though the show may focus less on some of the harsher truths of the U.S.’ westward expansion, this exhibition works to humanize both the settlers and America’s Indigenous people by presenting key elements of their humanity: their lives, their objects, and their realities.

The West as Home is on view at the Stark Museum of Art through January 22, 2022.

Curating for Her Community: Sarah Boehme at the...