Curating for Her Community: Sarah Boehme at the Stark Museum of Art

Throughout downtown Orange, the names of Lutcher, Stark and Lutcher-Stark blazon the facades of cultural and educational institutions, including theaters, museums and schools. Historically, members of this family built a lumber empire — the most notable trace being the imposing Queen Anne Victorian style W.H. Stark House, outfitted in the most decadent custom carpentry. The interior of the house, with its awe-inspiring custom woodwork carved and outfitted from Orange-based lumber, attracted customers from across the United States. Just across the street, the Stark Museum of Art bears a striking contrast to the Stark cupcake mansion. The Brutalist, postmodern structure is an icon that houses the extensive and nationally renowned collections of rare books, Southwestern art, and Indigenous art collected by H.J. Lutcher Stark and his wife, Nelda.

Curator and Orange native Sarah Boehme interprets this collection by putting these historic and regionally-specific works in conversation with contemporary perspectives. In a recent conversation, I learned more about Boehme’s history working with the Stark Museum, the formative experiences in her Western American Art education, and the institution’s current exhibition, Enlarging the View.

Caitlin Duerler Chávez (CDC): You have been curating the Stark Museum of Art’s collections for the past 15 years. What were some of your formative experiences that led you to your current position?

Sarah Boehme (SB): Part of my story is I grew up in Orange, this is my hometown — I went to high school here at Lutcher-Stark High School. I went up north to Sarah Lawrence College for my undergraduate degree and became interested in art history and that was a big experience for me. Then I went on for graduate studies at Bryn Mawr College in Pennsylvania, and earned a master’s degree specializing in Italian Baroque art. I got a teaching job at Sarah Lawrence, but that ended because I didn’t have a Ph.D, and then I came back home to Orange.

There was a museum being built down the street and I looked into working there until I figured out what I would do about continuing graduate studies. The couple of months before the museum opened to the public, in 1978, there were a lot of job postings, including those in reading and proofreading. I had done two courses in American art, but certainly did not know a great deal about Western American art. The curator at that time guided me along, and when she went back to graduate school, I sort of fell into the job of being a curator and learned a lot about Western American Art. 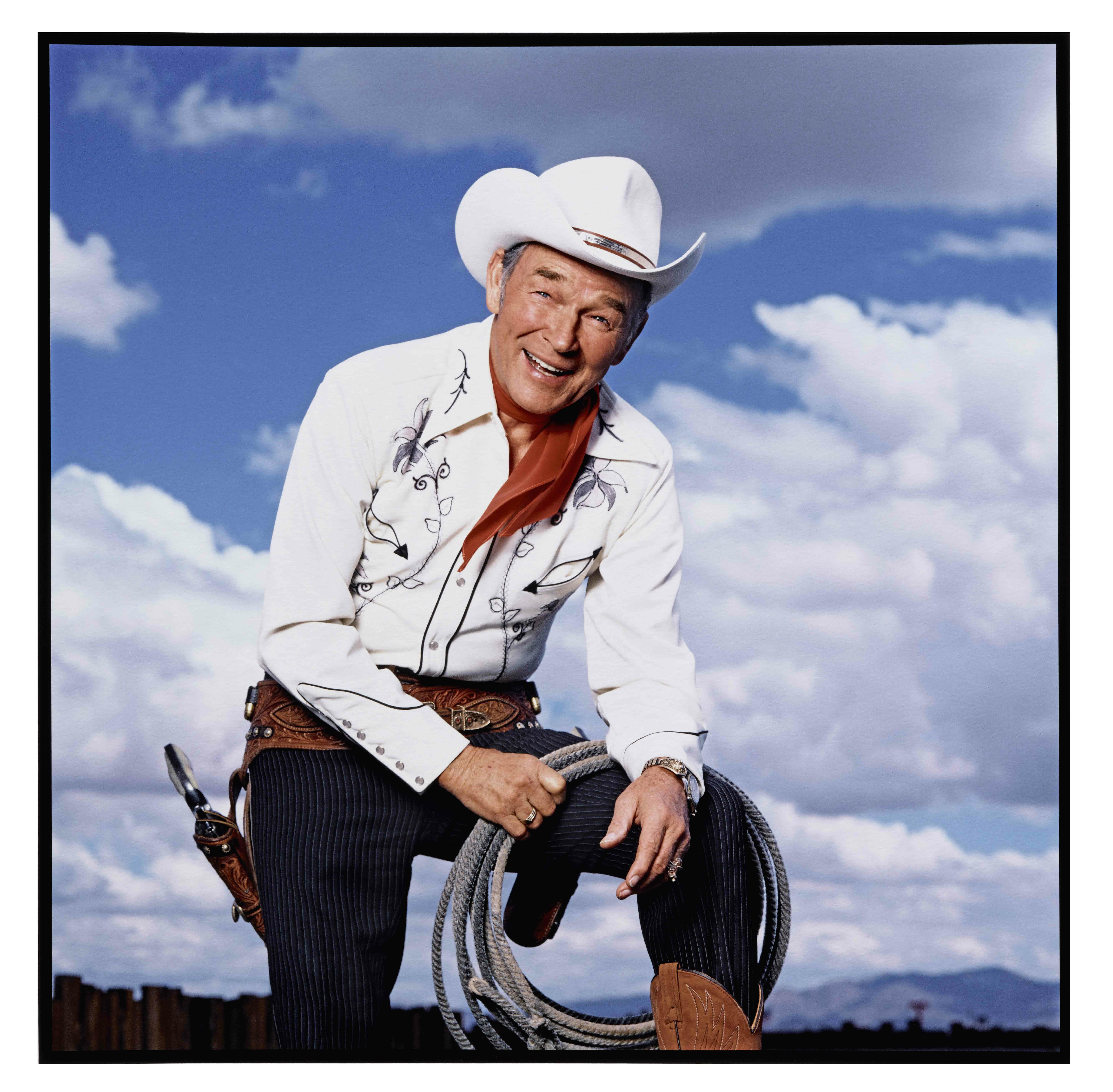 CDC: As you reflected on your early experiences working at the Stark, I kept thinking you were ahead of the time because your foundational Western art education came from actual objects —object-based learning. Institutions like the Museum of Fine Arts, Houston and University of Houston have been focusing on object-based learning in their collaborative art history courses over the last several years. It is a pedagogy that we’re talking about now.

SB: I learned a lot working in this collection for 13 years, and eventually I decided to pursue my advanced degree. I went back to Bryn Mawr and told them I wanted to change my focus from Italian Renaissance to American Western art, but such a specialty did not exist. Because of my experiences working with the Western art in the Stark Collection, they let me do work on my own, which led to a fellowship based at the Smithsonian Museum of American Art. Later, I accepted a job at the Buffalo Bill Historical Center in Cody, Wyoming, working with the wonderful collection of Western art there for about 20 years. Then the opportunity presented itself to come back here to Orange at a point when it was a good transition for me, and a great opportunity to return home and work with the community that I grew up with. 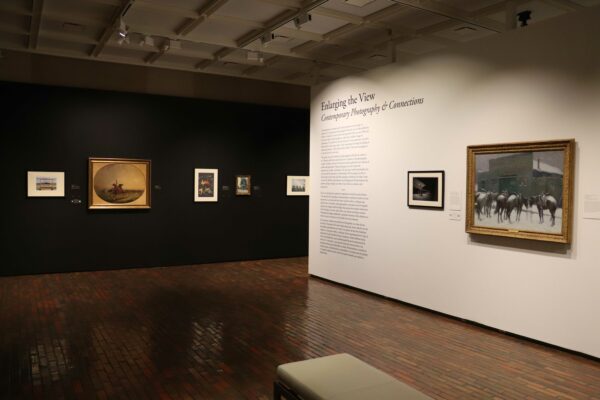 Entrance view of  “Enlarging the View.” Photography courtesy of Stark Museum of Art.

CDC: You were there when the museum first opened, and then you returned and have been here 15 years. What are some changes you’ve witnessed in the museum?

SB: I think the biggest change here is the more outward focus on education and relating to the public. When I was first here, the idea of school tours was a discussion that was just beginning. While we did have some school tours, we did not have a lot of outreach. Now, the museum, and the foundation in general, have placed a great focus on working with the community, and we’ve seen a great expansion of our educational outreach and education department.

CDC: The Southwestern art collections tell stories from the perspectives of both the Anglo settlers who depicted the region, and the Indigenous people who have lived there for generations prior. Can you discuss how the Stark considers perspectives of living Native Americans in the exhibiting of these works?

SB: In our exhibition of Indigenous art, I would say that this museum was, in contrast, groundbreaking when it opened to the public. We had an adjunct staff member, a man named John Garrigan, who was Red Lake Ojibwe, who had worked at the Museum of Modern Art in New York as a designer, and also as a freelancer. He did the first exhibitions and installations for the opening of the Stark Museum. He also advised on the exhibition of American Indian art, and made recommendations on outside additions to the collection. He was very influential in opening my viewpoints to understanding the importance of Indigenous arts in our national history. He was an incredible influence at the beginning of this museum and touched so many people. He’s passed away and it’s a great loss.

CDC: How does an exhibition like Enlarging the View reflect the Stark’s mission? The collective aspect of The Museum Project photographers reminds me of another collective, the Taos Society of Artists, in the Stark collections.

The Museum Project is not quite as formal as the Taos Society of Artists, where you had to be a member, but it shares that idea of working together, collaborating, and benefiting from the strengths you get from interacting with other creative people. The Taos Society of Artists was a marketing effort to get the group’s works out and seen, especially back then; the Museum Project was also a way to get their works exhibited and into larger collections.

Even though the Stark does not have a specific contemporary photography focus, we are collecting more contemporary and modern art and doing so slowly and carefully as our resources allow. The donation of photographs from the Museum Project is a great way for us to show more contemporary sensibilities about art through our collection, and to make the pieces accessible by putting them in a context of narrative art and natural history. 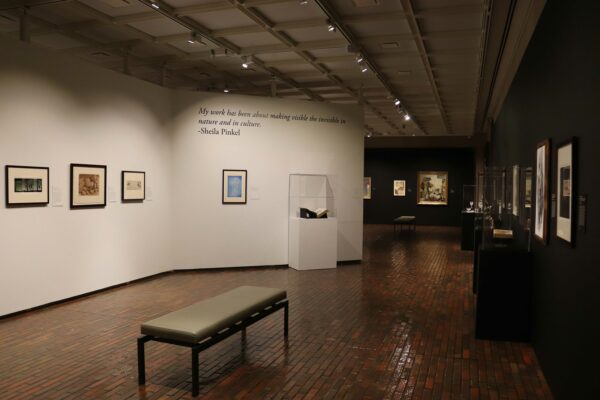 Gallery view of “Enlarging the View.” Photography courtesy of Stark Museum of Art. 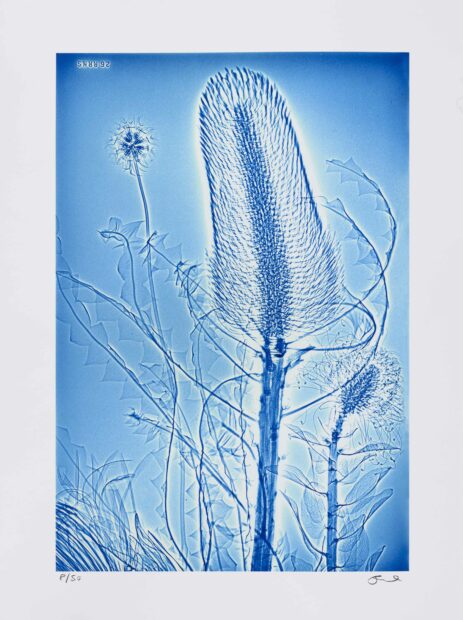 CDC: What were some of the rewards in pairing works from the Stark collections with contemporary photography?

SB: I think the rewards are just the joy of seeing marks on the collection and seeing them in slightly different ways. This exhibit was fun for me because I am a more  of a linear person — I generally approach exhibits chronologically. By pairing the works in this manner, it really is an exhibit where people browse; they don’t follow any set paths in the exhibition from point A to point C and so on. As I worked on curating the show, I focused on individual artists and photographers and linking the pieces. Ryan Farrell, the museum’s exhibit designer and our director of collections and exhibitions, paired up works visually. The more I worked at it, I would find other connections. I think that is one of the greatest rewards, just thinking in a different way and realizing connections that make you see things somewhat differently. 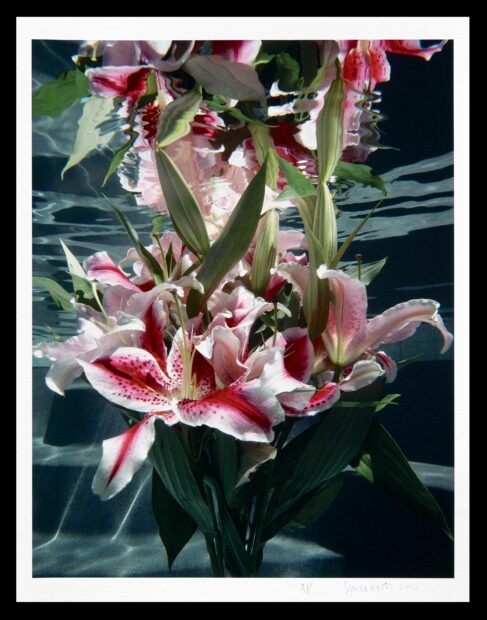 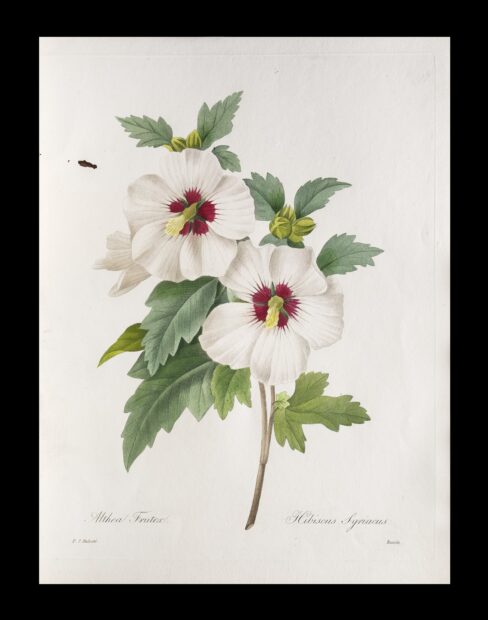 CDC: Do you have a favorite pairing from Enlarging the View?

SB: Melanie Walker who did photographs of endangered species — I want to highlight her photograph Rabbit (1993). She creates these scenes with costuming, including a rabbit mask, and she distresses the negative. It’s a very eerie image, somewhat unsettling and yet quite beautiful. Concerns with the well-being of endangered species is very appropriate considering we have a lot of wildlife art. And that’s one of the concerns in life, and is not exclusive to endangered species. Her point is that all life is in danger. I chose to connect Walker’s piece with John James Audubon’s lithograph Grey Rabbit (1843). In his notes, he connects the drawing of male and female rabbits with the tiny baby rabbit, through an incident in his own life when his daughter in law passed away. The drawing of the rabbit seems to have this anthropomorphic sense of a family in a very vulnerable little rabbit. And when you know the story behind that, you can make those connections between a work from a couple hundred years ago to a work made by a living artist. 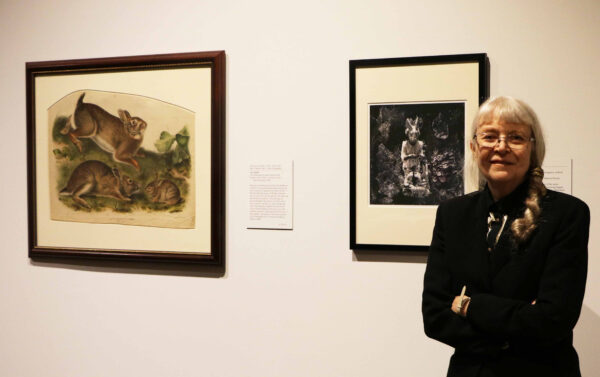 Enlarging the View is on view at the Stark Museum of Art through August 27, 2022.

Home on the Range and Sacred Lands: The...

Stark is a hidden treasure!

This article, and conversation were most informative. As a contemporary of Sarah’s I share her love and appreciation of most things “Stark”.