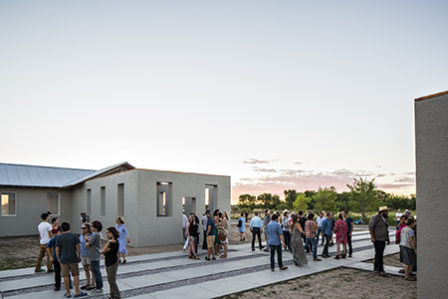 Chinati Weekend Open House in Marfa is resuming in-person programming for 2021, from October 8-10. (Due to the pandemic, the event took place online in 2020.) This year’s programming includes open-house viewing of new exhibitions and works in the permanent collections across town, including plywood wall works by Chinati founder Donald Judd, paintings by Hyong-Keun Yun, and Dan Flavin’s untitled (in memory of my father, D. Nicholas Flavin) from 1974. A new sound work by Houston trombone player and founder of Nameless Sound, David Dove, has been commissioned by the Chinati Foundation. Dove will perform this site-specific work that responds to the acoustical qualities of Dan Flavin’s installation untitled (Marfa project) with an ensemble of nine musicians on October 9. The Flavin installation has recently reopened after receiving significant maintenance as part of a conservation project.

Other highlights of the weekend include a Friday open studio with Chinati artist-in-residence Alan Ruiz, and a Sunday morning sunrise viewing of Donald Judd’s 15 untitled works in concrete and 100 untitled works in mill aluminum.

“Throughout his work, Ruiz approaches research and sculpture as forms of investigation into critical and cultural techniques of framing. Doors, walls, conduit, vents become ‘architectural media’ in large-scale installations and digital designs that expose and conceal acts of social and economic construction. For Ruiz, who relates his concerns as an artist to his own queer and Mexican-American subjectivity, these constructions are fundamentally political. How form performs was the central question of a 2019 artist talk at DIA:Beacon on Charlotte Posenenske (whose work was the subject of a special exhibition at Chinati in 2015), as well as the current special issue of Movement Research Performance Journal edited by Ruiz.”

Ruiz received an MFA from Yale University and participated in the Whitney Independent Study Program. He was awarded a Creative Capital Grant for his ongoing project Spatial Alchemy, which will be the subject of an exhibition at The Kitchen in New York in 2021.

For a full schedule of events, please go here.