Promise Me The Earth: Sherry Owens at The Grace Museum, Abilene

I first met Sherry Owens when I moved to Dallas a decade ago. She is a whirling dervish of activity — full of passion, ideas, and a daunting work ethic. Her robust laugh immediately puts one at ease, and her enthusiasm for life is contagious.

Owens has been an artistic force in sculpture for more than three decades. Yet it’s only in recent years she’s finally receiving accolades in the form of multiple museum shows across the state. She is deeply rooted in the Texas landscape, and crepe myrtle is her material of choice. Her process is physically demanding — even grueling. Her work fluctuates between large-scale installations to small, detailed sculptures that address environmental themes, and one’s connection to place, land and sustainability.

I interviewed her on the occasion of her current solo exhibition at The Grace Museum in Abilene. 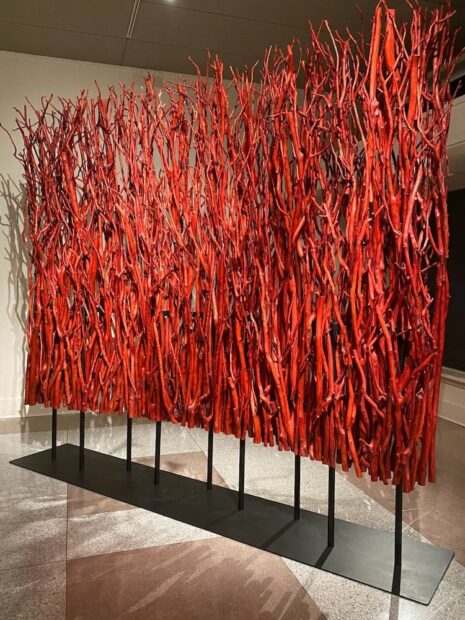 Colette Copeland: A lot has been written about your process, including the collection of the wood, the deconstruction, assemblage and the connection to weaving in your sculptures, emphasizing line, texture and form. I’m interested in unpacking the narrative. The work is deceptive in its elegant formality, but your titles speak to environmental concerns. Please tell us something about some works from the show in terms of their environmental context.

Sherry Owens: The process has evolved over the 34 years I’ve worked with the crepe myrtle tree. My concerns with human activities and their effects on our environment often find their way into the sculptures through analogy, concept and thought. An Ocean Between Us (2008) is an example of what a healthy coral reef should look like. Coral bleaching is rampant in the oceans today. The leading cause of this is rising water temperatures; about two degrees Fahrenheit above average can result in dying reefs. 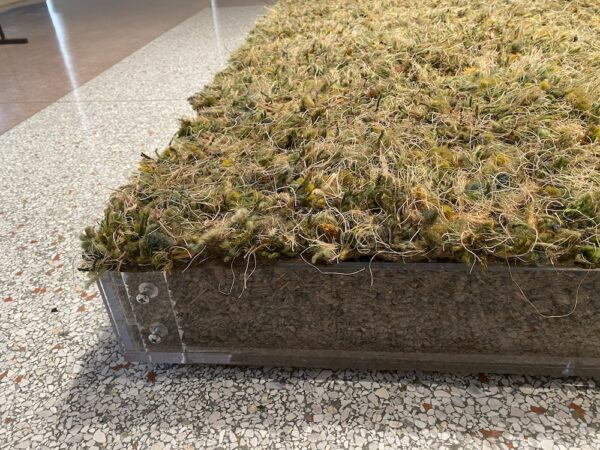 The loss of the American prairie is a direct result of the plow breaking the ground to create farmland. Millions of acres have been lost to this brutal assault on grasslands causing reduced water quality and increased greenhouse gas emissions. There has been much written about the 1930s, the era of the Dust Bowl and how this period of severe drought and dust storms struck the Great Plains and caused people to abandon their homes and farms during the Great Depression. Mantle (2000) is a romantic memory of what the prairie once was; it is a remnant of the diversity of plant life before the mass erosion of native grasses. 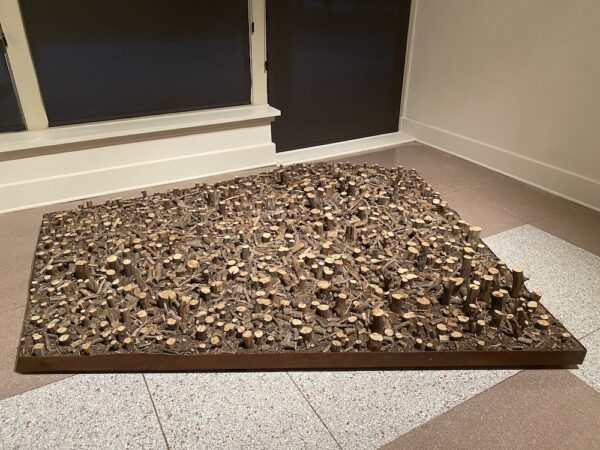 Sherry Owens, Every Breath You Take, 2009. Photo courtesy of the artist

The work Every Breath You Take (2009) is the most literal piece in the show as it relates to deforestation, the loss of habitat, and the increase of the release of carbon and other harmful greenhouse gases into the air we breathe when the forest is clear cut and burned. The woodlands and forests in the past were perceived as an inexhaustible resource across the globe, but we now have learned that forests are a fragile ecosystem and need to be protected. 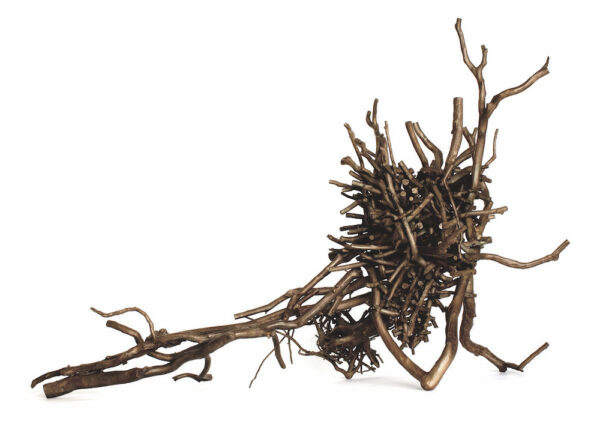 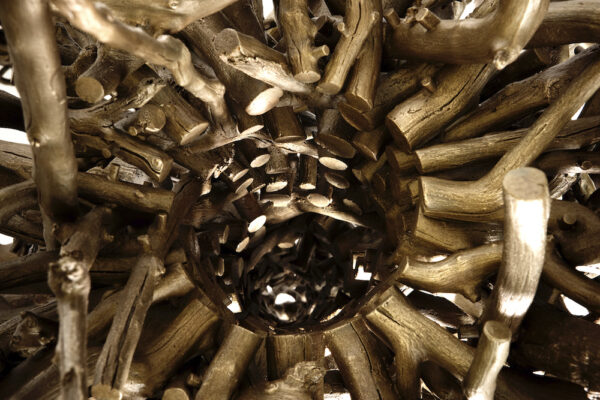 Drought (2010) depicts the dry land environments in Texas during 2008-09. Very little rainfall, intense heat, the loss of millions of trees, and food for wildlife and humans suffered during this extreme time.

Environmental impact is a direct influence on many of the ideas that inform my work. I respond to stories and scientific reports about our world ecology. Over the years, I have collected numerous books on native grasslands, the environment, atmosphere, rising temperature of the oceans, and the extinction of animal habitats. It all creates a giant bundle in my mind to feed the narrative of the work I make. 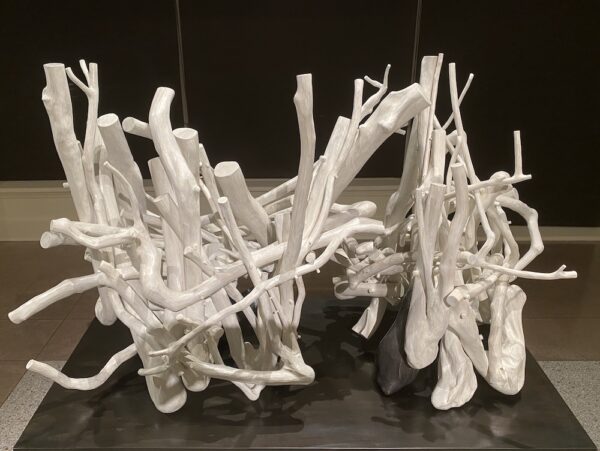 CC: Many of the works include a human element, such as bronzed hands or the ear, which explore the relationship of humans with nature. In your newest work, Grandfather’s Land, your bronzed elbows were hidden within the forest of branches. What is the story behind this work?

SO:  The cast bronze elements might be loosely considered as putting myself into the work. The linear dynamics of crepe myrtle limbs can take on many human characteristics. In recent years I have carved large yokes or forks from the trees into what I call “elbows,” so it was a natural extension for me to add my own elbows cast in bronze to the sculpture Grandfather’s Land (2021). My maternal grandfather played a huge role in my life as a child. He took the place of any father I have known and I spent many summers roaming around his property in east Texas. I have many rich memories that recur throughout my work about our time together. What can you promise those you love when you learn about mortality? What does it mean to promise someone that you will live sustainably and become a better steward of the land?

CC: The exhibition title Promise Me The Earth is full of contradictions. I initially interpreted it as a hopeful call to action, but upon further reflection, it also reads as a narcissistic anthem, that somehow humanity has the right to do whatever harm they wish to the earth and its resources.

SO: “Promise Me the Earth” shares my visual dialogue with nature. It stands as a challenge to the viewer to simplify their life, to embrace the principles of slow living, to live sustainably and whole. It proclaims that nature is nourishment. I don’t think that humans have the right to do whatever they want with the resources of this planet. I am more concerned with the observations of human activities and how they affect every living thing. Our impact on the prairies, the forests and the oceans is obvious in my lifetime. The idea of endless resources is now known as a myth. Change is one thing we know is inevitable, and now we are finally waking up to the thought that our behavior and how we preserve the natural resources of this planet will also have to change. “Promise Me the Earth” is optimistic — we are capable of learning about restoration and conservation to nurture and rebuild nature so that we may reconnect our lives to the natural world. 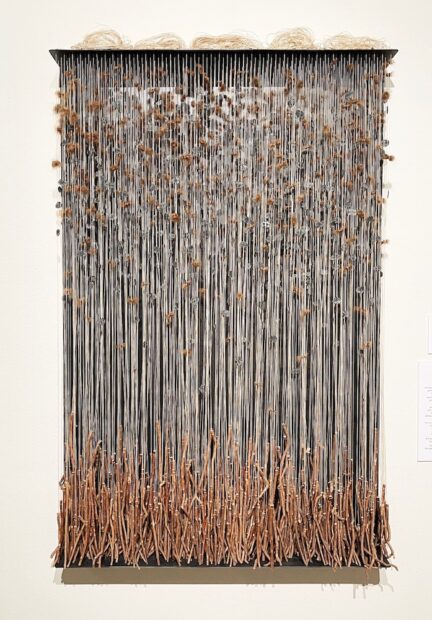 CC: Two of my favorite works are The Slow Growth of Sameness and Man Brain/Woman Brain. In both of these works, you explore the fragility and fallibility of relationships. In Slow Growth of Sameness, the element of time is a crucial component of the work, as you gathered your hair over 456 days. The curator told me that it is owned by your partner Art Shirer. It struck me as very poignant that your gift goes beyond giving one’s body; it contains the essential part of a person: their DNA in the form of hair, which lasts forever. In Man’s Brain, Woman’s Brain, I love the subversive humor, as you implicate the viewers in deciding the gender of each brain. Can you tell us more about these works?

SO: The Slow Growth of Sameness (1995) is the accumulation of 456 moments where I gathered my clean hair, from a comb after washing, over three years. It is visually interesting to me how it resembles a frame loom with all the linen strands strung through the tiny holes at the top of the piece. There is also a date stamped onto a small piece of beaten-out lead that is tied onto every strand of linen which describes the date each wad of hair was collected. I traded this piece with sculptor and collaborator Art Shirer for one of his works. He felt it was an important piece and didn’t want to see it disappear into a private collection. 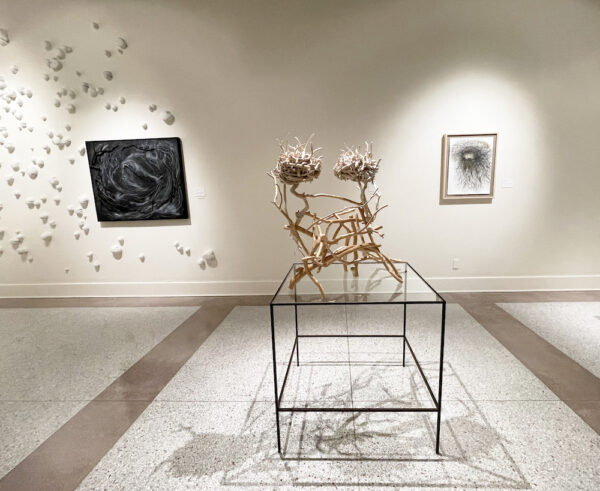 Within the brains of Man Brain/Woman Brain (2001), consciousness resides from a place deep inside our minds, our hearts, and our souls. It is known as various levels of awareness, curiosity, sensitivity, or attentiveness. Some may even refer to it as a kind of spirituality. It is the thing that is in constant transition giving birth to memory and instinct. The chaos in these constructed forms creates a physical presence revealing a psychological connection between independent minds.

CC: I read somewhere that you freeze the branches, to kill the bugs that live in the wood. I imagine that there are some good bug stories that led up to the current freezing process.

SO: I was one of the early and fortunate artists to have had a large studio for 15 years at the Continental Gin Building in Deep Ellum [Dallas]. During those years I was investigating various ways to rid the crepe myrtles of wood-boring beetles. I remember several times in the past when I could actually hear those beetles munching on the wood in the spring and fall. Now I have moved my studio and invested in a large freezer or reefer so that I can freeze the trees in subzero temperatures. This is also the least-toxic solution to keep the wood from being eaten from the inside out. 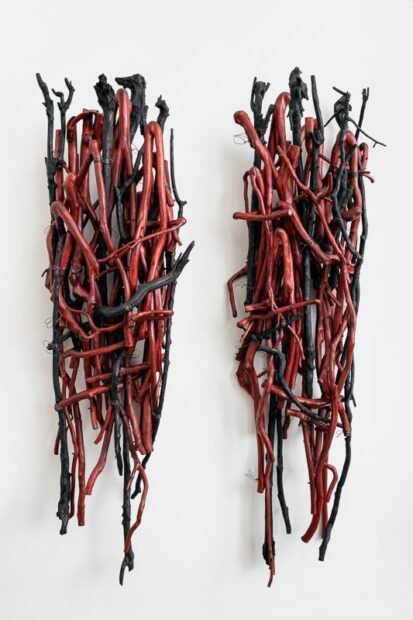 CC: Crepe myrtle symbolizes love, beauty, longevity and good fortune. I read that its flowers were considered sacred to the Greek goddess Aphrodite. How does this symbolism reflect in your work? And what questions do you hope the exhibition’s viewers will have on their minds after seeing it?

SO: I like the idea of crepe myrtle symbolizing love, beauty, longevity and good fortune, but this symbolism or myth rarely finds its way into my work. Having said that, there are abstract forms I make that certainly contain symbols of one thing or another. Sometimes subtle, but not always, symbolism is used to be discovered and pondered. Guardians (2019) isn’t subtle at all in its representation of sentinels stationed to protect the earth. Each one is equipped with armaments and is standing guard. 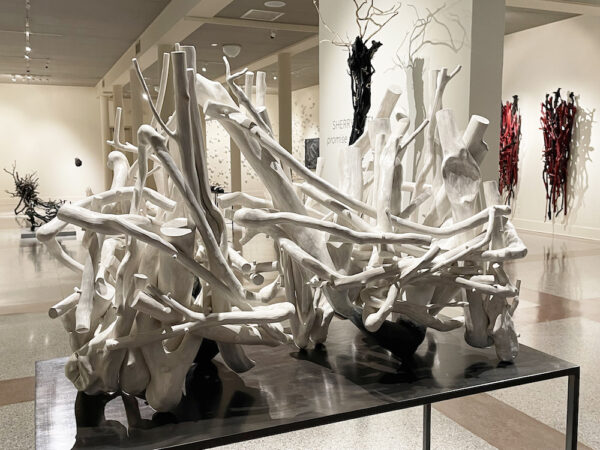 All of these pieces are the beginning of a larger dialogue. What can each of us do to protect the systems that sustain us here on Earth?

‘Sherry Owens: Promise Me The Earth’ on view at The Grace Museum, Abilene, through October 2, 2021

Ashton Thornhill at The Grace Museum

I have viewed and studied Sherry Owens exhibit at the Grace Museum. This interview has given more meaning to the show for me because I now understand the perspective better. I will definitely return to the Grace in the near future to enjoy and study Promise Me
The Earth from a fresh perspective. Thank you for drawing state wide attention to Sherry Owens. And the Grace Museum.

Thank you taking the time to read the interview and comment. I agree that Sherry’s work encourages multiple viewings and I am glad her words offer new insights into her ideas and process.

Thank you for “unpacking the narrative” in Sherry’s work! I have the pleasure of knowing Sherry and her work for many years now and her work at the current show at The Grace Museum is stunning. Her work “The Slow Growth of Sameness” is one of my favorites of the show. Enjoyed this conversation and insight into her work.

Colette thanking you for sharing this interview. I love Sherry and now I can better love her work as well.

Thank you Carmen and Lisa for the comments. Appreciate you both taking the time to delve into her work and the narratives.

What beautiful and meaningful work. and what a deep commitment to art and nature this artist has made. I’m very grateful to be able to see so many images of the work from where I sit in Berlin. Completely inspiring work on every level. And thank you, Collette Copeland, for the thoughtful interview.

Thank you Carolyn for reaching out from Berlin and for taking the time to red and comment.