Amidst Unrest, Artists Will Bring Texas Art to Turkey 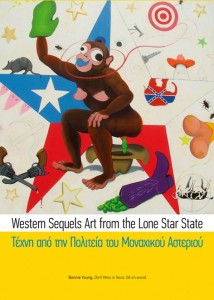 Despite recent reports of violence and protests in Turkey, Redbud Projects curator Gustav Kopriva (of Redbud Gallery) will open Western Sequels: Art from the Lone Star next Friday night, June 28, in Istanbul. Several collectors and several of the 50 Texas exhibiting artists will join Kopriva at the opening.

Redbud Projects has previously promoted Texas art by organizing group exchange shows in Germany, China, Peru, Cuba, Mexico, Greece, Egypt, Turkey, Greek Macedonia, and France. “This is not the first time Western Sequels has been exhibited during times of political tensions,” says Kopriva. “The show of Texas art made its debut in Athens, Greece in early November 2012 when the city was practically shutdown in anticipation of the parliament vote on austerity measures.”

Dallas artist Sherry Owens is hopeful that works, such as her Poised Between Death and Renewal will “provide the citizens and visitors of Istanbul the opportunity to transcend from reality, even if just for a brief time, and ponder the work on display.”

If Kopriva’s group needs a reminder that artists can occasionally have an impact on political realities, maybe they will run into performance artist Erdem Gunduz.  He has become the new symbol of anti-government protests in Turkey after his eight-hour vigil on Tuesday in Taksim Square, earning him the nickname “the Standing Man,” and inspiring silent protests across the country and elsewhere. 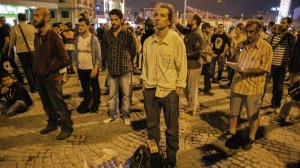 Promise Me The Earth: Sherry Owens at The...