What It’s Like to Fall in Love with Seymour Fogel 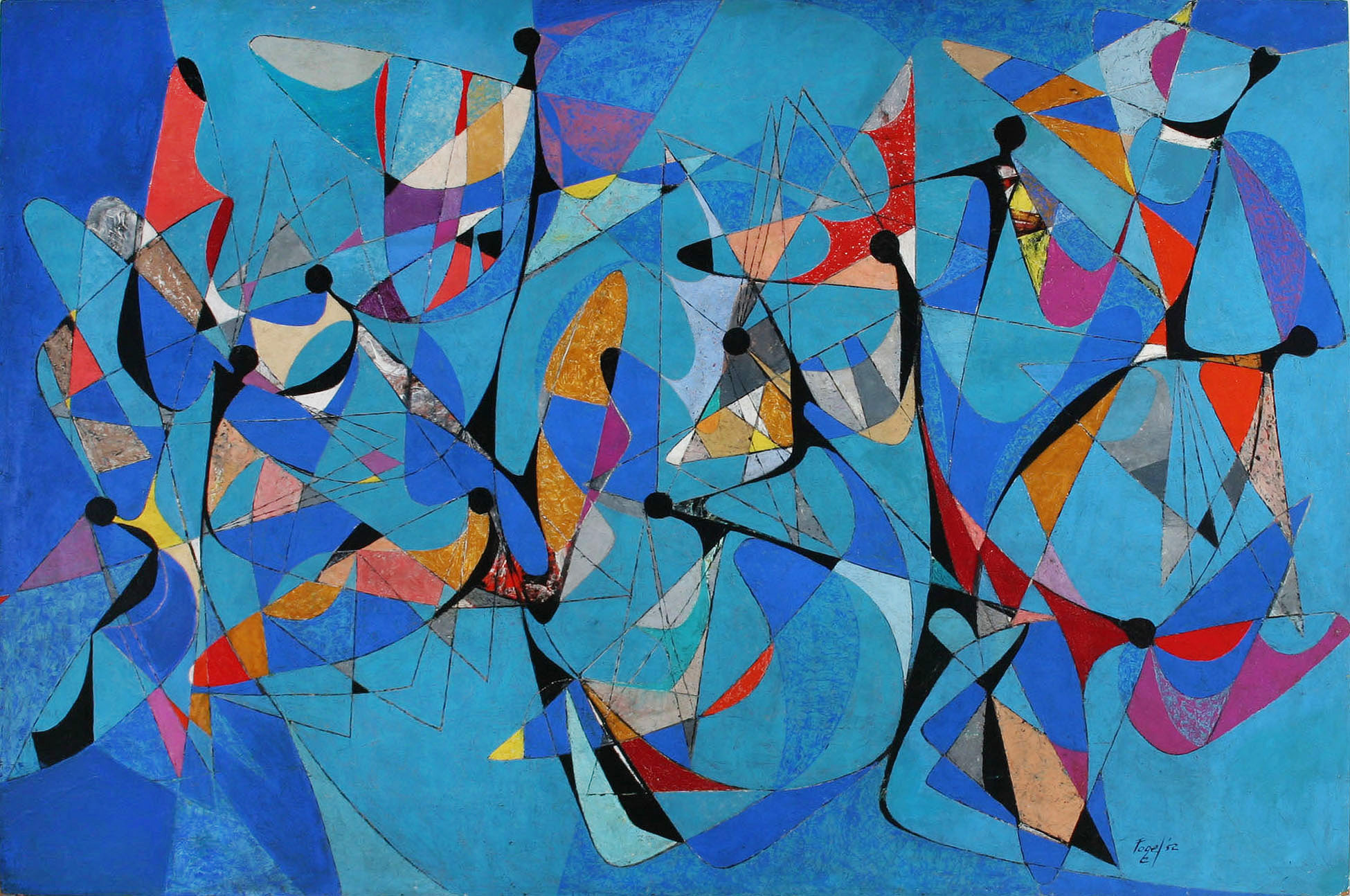 Fogel worked the surfaces of his paintings with sureness of hand that can’t possibly be captured in reproduction. Icarian Flight, 1952, oil on Masonite

The mid-century artist Seymour Fogel has managed to fall between the cracks of history, to some extent, and that’s partly because the work over his long career can’t be pinned to one movement or method or—let’s face it—dramatized gimmick. And his being overlooked by so many is a crying shame, because so much of Fogel’s work was great. Finding him for the first time recently, in Abilene at a solo retrospective of his work at the Grace Museum (he died in ’84)—really seeing an exhibition of his work in person—was something like meeting someone I’ve been unfairly kept from for all my years of looking at art. There’s not even that much information on Fogel, not in relation to how strong his work is. And I love these paintings, and with a sense of revelation and sadness I wondered how my eye might have been honed, growing up, if I’d seen his work in our Texas and New York museums and public spaces to the extent that I saw the work of artists like Kline and Motherwell and Rothko.

But there is a price to be paid for being hard to nail down, and Fogel seemed to have an unquenchable need to explore and work new aesthetic territory as the decades rolled on, from the ‘30s to the ‘70s. And there’s a price to be paid for not being the first at something, but rather the committed (and probably battle-scarred) perfecter of forms. Fogel’s abstract painting and murals in the 1950s are about as satisfying to the eye as these delivery systems can possibly be: they vibrate with intelligence and complexity and feel authentically urgent and immediate. They weren’t necessarily the first of their kind, but they are beautiful, and they have weight, and they sing. I would rather spend an afternoon with two Fogel paintings from the 1950s than 30 paintings from most any painter working today. They scratch a visual and visceral and intellectual itch, and I feel they would whether you knew they were made in the context of their era or not. You never doubt that Fogel had to make them, and you never fail to see how much time he spent on and with them. These works feel integral to the man himself. It’s a startling and lovely introduction to an artist. 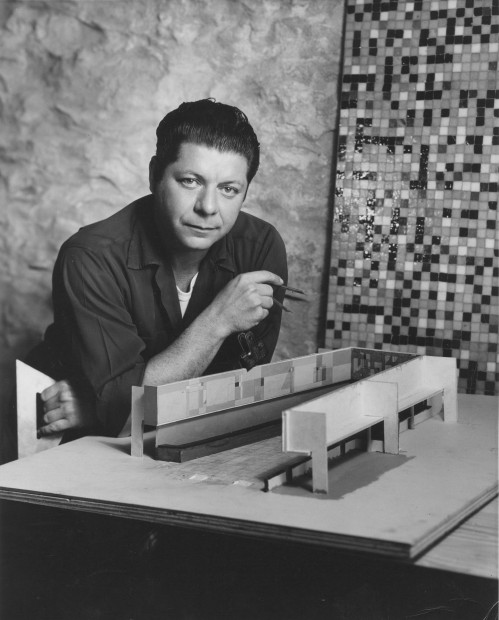 The Grace Museum’s curator, Judy Tedford Deaton (the show was co-curated by Katie Robinson-Edwards) has packed as much of his work as she could get her hands on into the main downstairs exhibition space at the museum. And you really can’t blame her. Screw the tastefully spare install in this case; I would have, too. Staging this show has been the only opportunity and excuse for Deaton to get so much of Fogel’s work together under one roof and to call in national loans that might have fallen through if she’d blinked, and instead of feeling overwhelmed when I walked into the room, I felt a whoosh of relief that there was enough there to really get a sense of Fogel’s trajectory.

Fogel was born in 1911 in New York City to Eastern European immigrant parents, and his first real job as an artist was working with Diego Rivera in the 1930s on his big murals; Fogel was connected one way or another to nearly every working artist in New York in that decade and beyond it. His studio was downtown. He came to Texas to teach at UT Austin from 1946 to 1960, and then returned to New York. Some of this best work (and the bulk of the paintings on view at the Grace) he made while here, though, and there’s your big Texas connection. But it’s hard not to wonder if his years away from New York during that city’s propulsive time as the center of the art world is one of the factors that undermined his legacy. 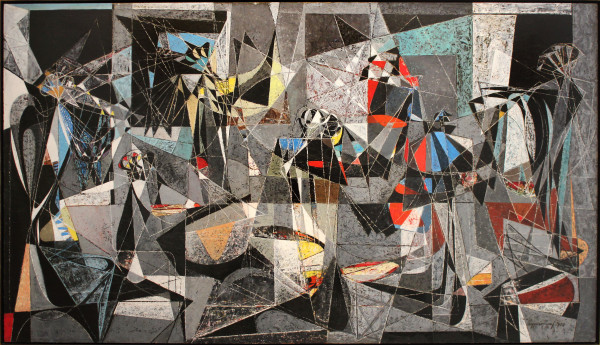 You can see in his early figurative work that he was a fantastic draftsman, and during the Great Depression he rode the rails around the country and made works in the social realist style of the day. He headed up a lot of WPA mural projects in the ‘40s, and slowly but surely his love and understanding of architecture and design pulled him toward post-cubism and constructivism in his paintings, and finally in the 1950s into something like Ab Ex. By this time, Fogel worked the surfaces of his paintings with sureness of hand that can’t possibly be captured in reproduction. They deserve face-to-face encounter. In his best work, there are subtle undercoats, with layers of paint hiding and revealing other layers and colors; etched-in evocations of both the organic and mechanical; the positive and negative seated and undulating together; a meticulous focus on precise line, color, and shape; a wax-layered sheen (almost encaustic) giving depth to the whole. There is no argument that Fogel’s longtime relationship to ambitious mural making informed every aspect of his paintings, and it makes you wish more painters had a sideline in murals. His surfaces and compositions buzz with authority and resolution. They are wonderful. By that I mean many of them are, today—individually and discretely—very, very good-looking paintings. 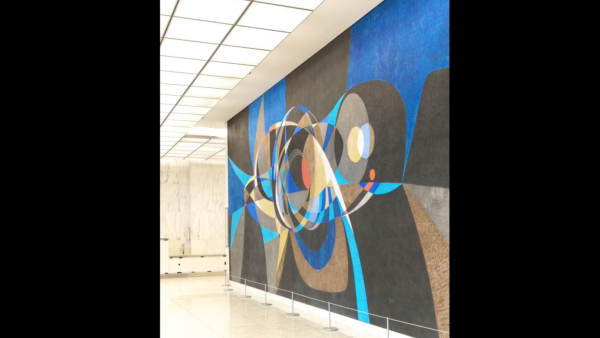 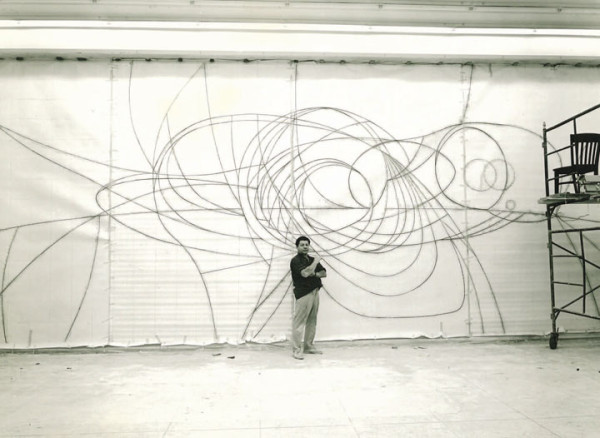 They are also, in what is right now a possibly unfortunate nod to kitsch and Mad Men, what we think “mid-century modern” art looked like. It’s the kind of painting they bring onto movie and TV sets today to signal: Look out, it’s 1960 and we’re about to pipe in some Miles Davis. And I don’t care. These painting are too good to be cynical about. 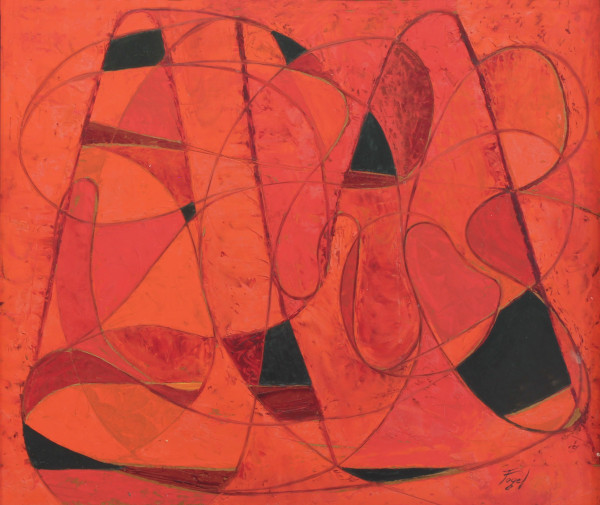 I write that his work changed with the times, as though this is an unusual quality from an artist (it’s not), but let me qualify this: as time moves on from an artist’s heyday, the long view of his work and the way his best paintings settle into history should contract (rather than protract), and come into tighter focus. If Fogel has been dismissed by major institutional curators due to his chopping and changing, I’d like to think that at least the work he made in the late ‘40s through the ‘60s will find its reassessment, here in this spate of revisionist history and all this clamoring to go back in time to find the Next Big Thing. Although it might be a cold day in hell before a white male gets that benefit. I understand that right now. 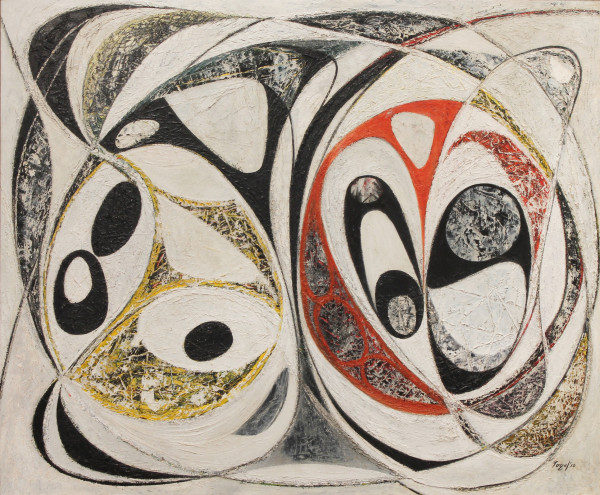 I also want to stress how rewarding it was to find this work at the Grace Museum, and to give kudos to Deaton for having the wisdom and determination to organize it. It’s the kind of initiative—the show of works by the undersung artist—I want to experience more and more as I get older. I have a growing sense that in this time and place when everything is accessible all the time and all information is at the ready, there’s something poetic about a long drive to see something rare and unexpected, and I wonder if smaller regional museums will become more a sought out as art lovers grow weary of seeing too much of the same kind of collecting going on in the big-city institutions. Maybe it’s perfect that Fogel’s show was at the Grace instead of at the Whitney. Maybe a curator from the Whitney should make a trip to the Grace now, before Fogel’s show disappears forever.

Seymour Fogel: On the Wall and Beyond at the Grace Museum, Abilene, through Oct. 24.

All images: The Grace Museum and Art © Estate of Seymour Fogel/Licensed by VAGA, New York, NY

Ashton Thornhill at The Grace Museum

Promise Me The Earth: Sherry Owens at The...

Great review and a super exhibition. See this Fogel exhibit, as well as another often over-looked artist, Bror Utter (1913-1993), at the Old Jail Art Center in Albany while your in the “Big Country.” Only 30 minutes away. A two-for!

This is how I see Fogel when he paints. You know. Like he’s dancing to a different frequency.

By the way… I remember the “Rich and Blase” headline on the rich kids magazine.

Building tunnels to brake the bank.

Lovely review! If I did not already own his work I would be in the market.

Thank you for singing the praises of a very talented man.

What happened to the exhibition after the Grace? Did it tour? Perhaps a campaign to “push” some curator to revive or would it be an impossible task to ‘re-do’? So So sorry to have missed that exhibition; it is classic work.