Texas Governor Greg Abbott announced that Texas would be rescinding all state mandates for masks on March 10, and that any business that wished to could reopen. It was a backhanded way of saying his constituents: “I’m sure you’ll figure it out.” Texas is its own region in the United States, mostly escaping the designations of “South,” “Southwest,” or “Midwest,” even though Texas gathers those geographic designations quite neatly. Texas gets to make its own rules — or flout them, apparently. But it’s a big state with a big population. The decisions and cultural trends that are made here matter, because they trickle into the greater national consciousness. Texas often call the shots that the rest of the country hears, like it or not.

I received my own literal shot on March 28, 2021, in Lufkin, Texas. The Dallas-Fort Worth metro area has been understocked and overbooked regarding vaccine availability, and so I drove three hours east with a friend to get our first dose of the Moderna shot. The chatty doctor administering the vaccine, also from Dallas, assured me that I could go home and live my life as normal. Following a second dose, my immunity to Covid-19 kicks in by mid-May.

Chatting with Dallas artist Jeff Gibbons at his studio about this Covid year away from society, he said: “We’re all professional waiters now.” Aside from the unintended pun about service work, it’s true that waiting is what many of us do now. Waiting on life to return, waiting on the government to make policy decisions, waiting on nature to take its course. Millions of people — including artists, service workers, and business leaders trying to figure out what we should do when no greater authority helps us navigate. When no strategy presents itself, the hope that one will surface feels like the “strategy.” That realization was sour a year ago, and it still feels that way today.

The takeaway here is responsibilization: the loading of large problems onto the unwitting people who didn’t cause them. Matters that should and could be addressed by the public sector (health, for one) have been dumped on us as individuals. Businesses must apply for loans from the government to assist their decimated bottom line. Citizens have to petition any of the myriad application portals to convince a pharmacy that you should be prioritized over someone else for a vaccine. (Texas has opened eligibility to all adults now, but those first weeks of vaccine rollout sure were confusing for most of us.) You have to navigate this storm using your own map that you have to draw yourself.

Artists know this intersection of self-reliance and survival. It’s a lot of roles to fill when you are your own manager, press agent, Human Resources, and accountant. Creating culture can be an occupation, but it’s one that is self-imposed. Artists are often their own advocates as they forge new strategies to create work in spite of a political gridlock that often forgets about them.

Here are some notes from the perspective of our Texas art calendar, looking at exhibitions and happenings from the previous month that navigate the rollercoaster of shutdowns and re-openings: 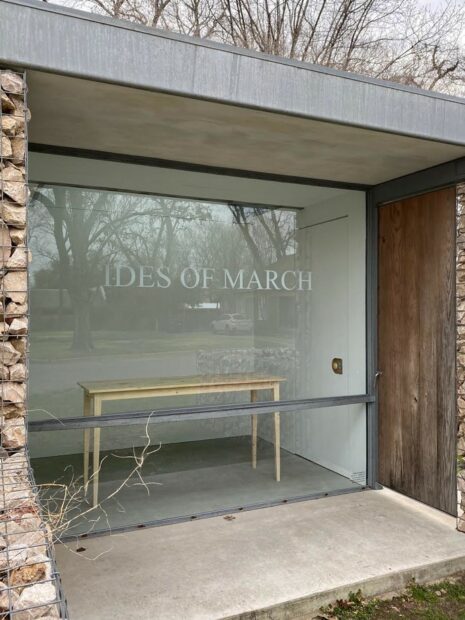 “Ides of March” exhibition by Blind Alley Projects in Fort Worth

Blind Alley Projects in Fort Worth, a standalone window-fronted space operated by artists Terri Thornton and Cam Schoepp, conducted an experiment during one lunar cycle. A kind of two-way open call was held via email prompts through [email protected]. Blind Alley sent out open-ended questions like “What was your revolt? Where was your attention?”  to which participants responded with images, texts, and any other impulse they felt moved to provide. The exhibition space was transformed from a blank slate into a wall of thoughts, perhaps reminiscent of the shimmering barrage of pixels of Beeple’s Everydays: The First 5000 Days. Blind Alley’s presentation was socially distant by design, as the participants provided their interactions via email, and the space itself has no interior gathering place.

MASS Gallery’s HOTBOX residency, in Austin, enters its ninth year, and will double its number of grant-receiving artists compared to last year. Four artists will be selected to receive $500 stipends, with no requirement to present new work.

“At a time when it was unclear how to provide space and resources safely, we decided that the financial support we could offer to artists in this time was more important than ever. We’re continuing the model this year and will choose four artists or artist-teams to receive $500 grants to make work from home (or radically reimagine what a ‘studio’ might be) and share via our digital platforms.” 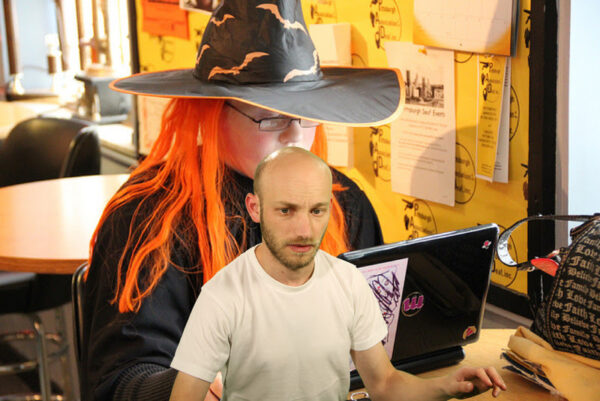 Sam Lavigne for My Homepage Residency

Zoom appointments be damned! Sam Lavigne’s My Homepage Residency, a web-based artist program based in Austin, is an examination on the ways one can ’self-sabotage’ the video-chat platform so that your participation on any call can be excused. Lavigne’s Zoom Escaper application lets you ‘self-sabotage’ your audio stream so that you are booted from the call due to… annoyance. His Zoom Deleter application simply searches your computer for the application and excommunicates it. Consider this the inevitable pushback from the pressure to conform to an anti-social paradigm. Rather than wait for society to come back online, Lavigne took matters into his own hands. 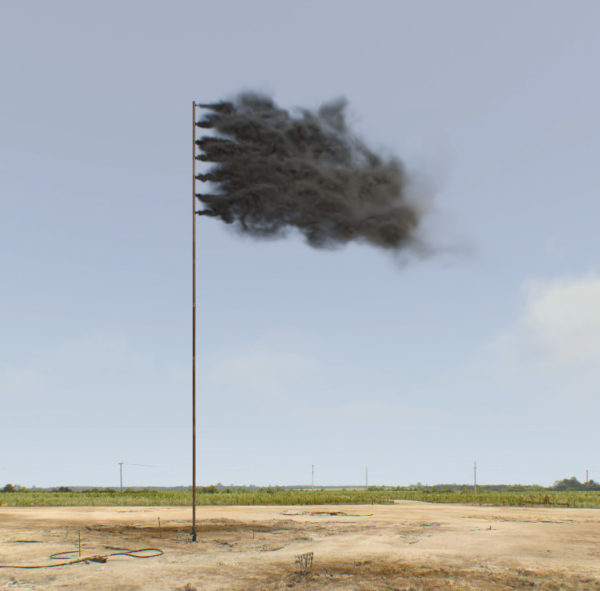 Pace Gallery (New York) announced that John Gerrard released his Western Flag (Spindletop, Texas) as an NFT on March 20. Half of the ethereum proceeds of the sale will go to an emergency cryptofund that regenerates soil in Ireland. Gerrard wants to do business ‘transparently,’ and the litany of subsidiary actors (this coming from a statement from Pace Gallery) indicates that there will be individual experiments during this initial torrent of NFT activity.

The work was shown at the Dallas Museum of Art in 2017, as part of its mega-exhibition Truth: 24 frames per second. Western Flag is a live software simulation of an environment in West Texas. The barren land and incoming dust storm are populated by one smokestack, which blows exhaust in a formation that resembles a flag.

A lot of press coverage of NFTs is intent on marking it as a ‘gold rush,’ and that seems to be apt based on total interest from the burgeoning “asset class.” Digital products have been eating their way into our consumer habitats for a while, so why wouldn’t they find their way into the art market? Investments are excitable moments of buying into hype, but don’t squander your precious attention span on a lot of trading activity if you aren’t prepared for the highs and lows.

Sofia Bastidas Vivar, Lizzie MacWillie, Darryl Ratcliff, Lisa Neergaard, and Maya Crawford presented their Gossypion Real Estate Group (GREG) program on March 25. The group is a meeting of the minds of the aforementioned Dallas-based creative and social-practice workers. The presentation was meant to garner interest for their bespoke artist studio/communal living project, backed by theoretical numbers outlining strategically lower building costs, which translate into reasonable rents that would hover around $750 for each renter, or $1500 a month for the entire structure. Local builders have been consulted in the development; GREG’s model targets land purchased for these units to be around $10,000, and the group has been looking at land with concerns to “Visibility” (Sofia Bastidas). Land costs in Dallas proper are rising, and could push the development of the project somewhere outside of it, but within a one-hour driving radius of the city.

Lizzie MacWillie of BC Workshop in Dallas had this to say about the strategy to create affordable housing:

“Ensuring that those values continue to stay low is part of our thought process around the design and the development. I think also the way that we’re hoping the investment component works is that there’s community investment and that we would work with partners to ensure that folks in the community had access to that process.” 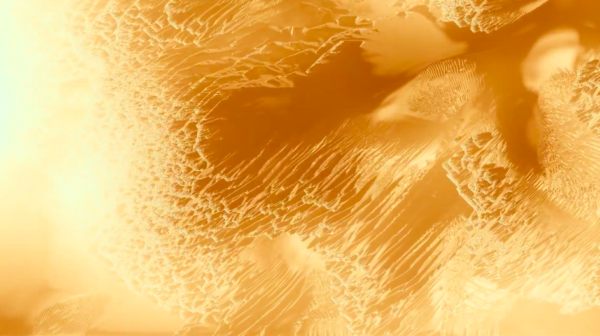 Antonius-Tín Bui organized a series of guided meditations with DiverseWorks in Houston called Collective Ideation. Viewable on the DiverseWorks Youtube channel, the meditations are spoken with melodic resonance, and backed by dreamy, radiant color gradients. Creative Ideation #5 by Theresa-Xuan Bui is especially uplifting, and conjures a positive mode of recollection that overrides the requisite survival-mode cadence of life that has plagued us the previous year. The works in this series, with a gracious mindset, address themes of seeking place and manifesting acceptance. It’s the spirit of life — creation for its own sake.