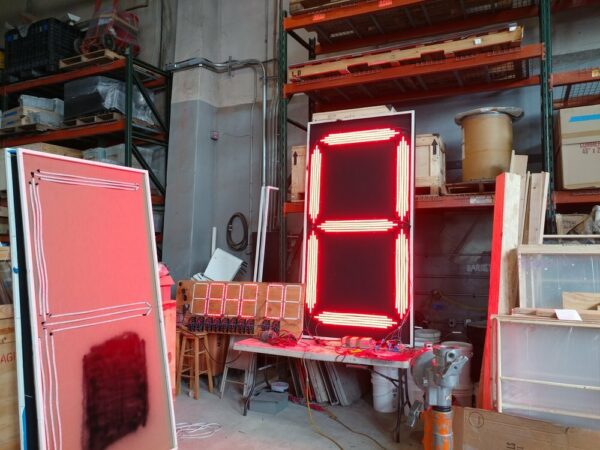 The January 6, 2021 riot on the U.S. capitol was a historic event. Violent events at the legislative building are rare, but not unheard of. In 1915, a former Harvard professor planted a bomb that detonated during a senatorial recess; no one died. In 1954, four Puerto Rican Americans injured five congressmen by gunfire, in the name of Puerto Rican independence from U.S. territory. Two more bombings in 1971 and 1983 were claimed by different resistance groups, citing retaliation for foreign bombing raids carried out by the United States. The Biden inauguration ceremony, reverential and orderly under severe military presence, reinstalled some tradition, after Trump’s years of departure from all norms.

We use the word “inaugural” a lot when talking about art or art events. There are many first moments, and they’re usually marked with anticipation for something truly new. The art of the 2021 inauguration ceremony — the poetry, music, and fashion — were widely celebrated in the days following. There were no departures from the norm to scrutinize in morose detail, and so we return to poring over the appurtenances of tradition. Aesthetics are important to Trump, but I suspect we’ll see the fine arts treated with more convention under Biden, at least in how the White House is decorated. It’s hard to say whether that’s a return to “normal,” as desperate as I may be to believe it.

Here are some notes from the perspective of our calendar, looking back over the previous month. 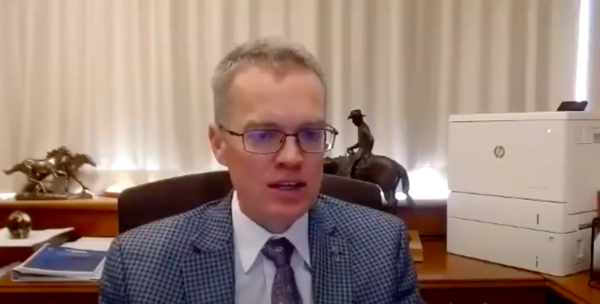 In mid-January, the Houston Arts Alliance hosted President & CEO of the Houston Livestock Show and Rodeo, Dr. Chris Boleman, for an online presentation titled What’s Next for Arts and Culture Events in Houston? He discussed the challenges of day-to-day business in light of the shutdown beginning last March, which impacted revenue flow, and more broadly, the flow of hotel-occupancy tax dollars that the Houston arts economy relies on. Organization leadership during this time has meant lots of crisis management, and this discussion lent some insight into how scheduling decisions are being made for a business with logistic concerns spanning multiple vendors, such as the Rodeo. “We are certainly connected to March,” Boleman remarked, referring to the Rodeo’s traditional opening date. “One thing we did was talk to a lot of our rodeo partners and make sure that was an okay move for May.” He qualified that there are no guarantees that the rodeo will happen without a hitch. (It will not; on February 3 the Rodeo cancelled its May plans.) “We have to keep every option open.”

The moderator offered that there are a lot of different stakeholders in the rodeo as an event, and asked Boleman how he managed coordinating and corresponding between them. Boleman emphasized the importance of getting expertise from everyone in their respective fields, which informed his ability to provide a a strategy going forward.

Texas Talks Art, a still-new initiative that brings together museums and organizations across the state to present  discussions with exhibiting artists, has launched its weekly program for the public to view as a live broadcast, and as archived on a Youtube page. (Disclosure: Glasstire is a media sponsor). The livestream events are intended to give enough room for audience discussion with the artists without impeding too much on your lunch hour. The discussions so far have included Zeke Peña in conversation with Kerry Doyle; Ja’Tovia Gary in conversation with Vivian Crockett, Assistant Curator of Contemporary Art at the Dallas Museum of Art; Lisa E. Harris in conversation with Aurora Picture Show curator (and artist) Mary Magsamen; and Natasha Bowdoin in conversation with Shirley Reece-Hughes, curator at the Amon Carter.

Of course the initial shutdowns scrambled exhibition schedules, and it took months for art spaces to reconfigure which shows would be postponed, and whether shows would go live at all. Clusters of galleries that would normally open or run exhibitions simultaneously have shifted and staggered their programs, breaking the rhythm that undoubtedly took years to establish. But some of the Design District mainstays of Dallas (many of them members of the cooperative Contemporary Art Dealers of Dallas) have begun to program their shows along the same timelines again. Cris Worley, Conduit, and Galleri Urbane all opened shows on January 9, and most of these close on February 13. It’s a small thing, but I don’t take consistency for granted these days. 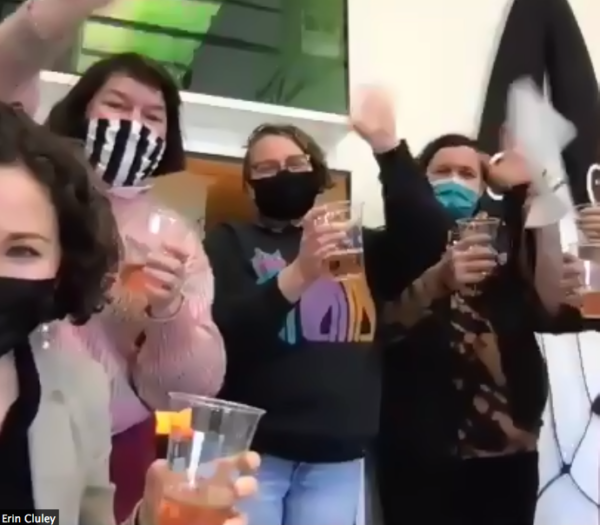 In Dallas, Erin Cluley hosted the the 2021 CADD Fund, an annual live event which awards a cash prize to one North Texas BFA or MFA student to realize an art proposal. Juried by Katherine Brodbeck, Kristen Gaylord, and Frank Hettig, the finalists are voted on by attendees. This year, the event was held online for the first time since it launched in 2014. Video presentations from all finalists were streamed, and a three-minute Q&A followed each presentation. Questions over budgetary concerns and production expectations for each artists’ presentation were fielded by participants, and moderated by Cluley.

Christopher Evans (MFA, UNT 2020) received the most votes from the participating audience for his book project Country Mile. He’s been awarded $3,500, with the remaining finalists receiving $720 each.

I did a session with artist Carolyn Sortor for beingtogether, her online residency project she’s developed and presented via Glasstire. The project took the form of simple, one-on-one Zoom chats, with the option for both parties to sit in silence, akin to a Quaker Friends meeting wherein a group gathers with no intention to speak unless something moves one to do so. She mentioned that the project has had a restorative effect on her in this time of isolation; we soon moved onto more private discussion topics. But I asked if she was familiar with Masterworks.io, an investment plaftform that enables individuals to buy shares in “iconic artworks.” She hadn’t heard of it, but after a little digging replied, “I note that their ‘team’ includes zero art professionals.”

Be sure to watch her interview with Christopher Blay here, part of his Artist On Artist series of podcasts and videos. 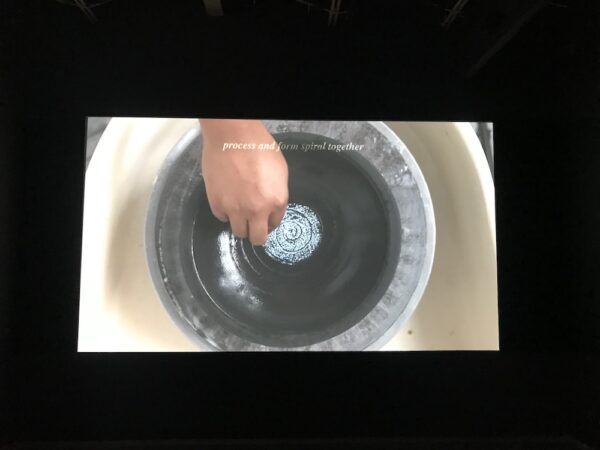 After more than 10 months, Dallas Contemporary has opened its doors to three new exhibitions featuring studio photography, contemporary painting, and a new video commission by a Texas artist. At a press preview, DC’s Director Peter Doroshenko started by saying, “Early June last year I thought we’d open September. Of course that was way off.” Late January 2021 was the realistic target.

Images from fashion photographer Paolo Roversi are on view, following DC’s dedication to fashion and industrial design. Art is the impetus for the work here, but so many artists are working in multidisciplinary modes, and DC tries to mirror that in its programming. Roversi, from Italy, has been working since the 1970s, and bought his current Paris studio in 1973. He interned with classic studio photographers, which shows in his shots of models garbed in sculptural clothes.

At the preview, concurrent exhibiting artist Ariel René Jackson asked if Roversi does post-production work on his photos, referencing the seemingly inverted color space of the “white” photos on view. Doroshenko replied that he does physical manipulations on the negative, and that virtually all of the color quality in these images is actually a result of studio lighting. It’s all analog and mechanical. Nothing digital.

Liu Xiaodong’s paintings, also on view, are large depictions of life in Eagle Pass, a border community 144 miles west of San Antonio. These paintings are Chinese realism in scale and drama, featuring international subjects far from China. Almost all of these were produced on site in Eagle Pass. The artist befriended the local Sheriff, soldiers, and residents of a safe house in his process, to better understand what life is like in the area. His two lengthy research trips are captured in a documentary shot by Yang Bo, where the artist’s charm on display helps makes sense of the many sketches that pair with the exhibition.

Ariel René Jackson’s new video, commissioned by DC, is in the black box space. It features Jackson’s poetry set to scenes of the liquid and physical qualities of clay. Jackson received her MFA from UT in Austin, and curated one of the most effective online exhibitions in Texas in 2020.

The new video, Doubt & Imagination, has been in development since summer 2019. Jackson attended the Skowhegan School of Painting & Sculpture artist residency in Maine, where she used the ceramic studio and documented ceramic artists at work. She wanted to develop a story about colonoware, earthenware artifacts made by African Americans and indigenous people along the Atlantic coast during the colonial era. There’s some debate around the fragments originating from North and South Carolina, according to her research. Scholars disagree on their ritualistic application, or whether they were functional to begin with. In response to this, Jackson brings up a statement by archaeologist Leland Ferguson: “Where there is doubt there has to be imagination.” Suspicions that arise during research require creative solutions.